Home Sport Watersports in Italy | 7 Of The Best Destinations
Sport

Watersports in Italy | 7 Of The Best Destinations 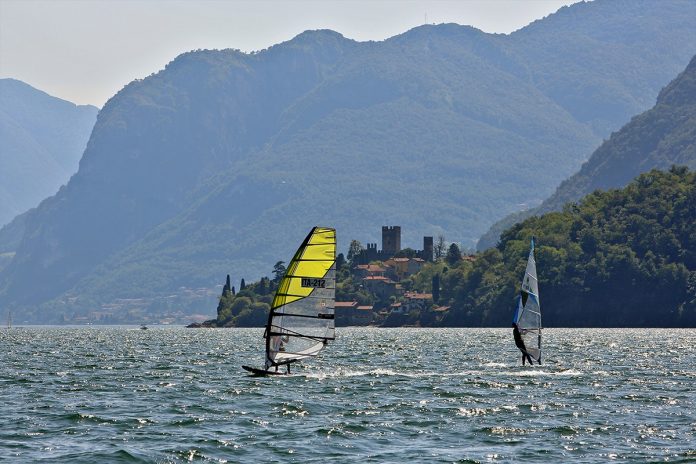 The best places to go windsurfing, kayaking and kitesurfing in northern Italy

The northern regions of Italy aren’t all rock faces and forests. There’s plenty on offer for kitesurfers, windsurfers and lovers of all kinds of watersports. There’s even has an incredible surf spot in the west of Italy – something perhaps particularly surprising given the infamously flat nature of the rest of the Mediterranean.

So where should you go if you’re heading to Italy and fancy getting wet? We’ve teamed up with Green & Blue, a new initiative set up to promote the region as an adventure sports destination to give you a flavour of what’s on offer.

“There’s even has a legit surf spot in the west – something that’s almost unheard of in the normally-flat Mediterranean.”

With no fewer than eight UNESCO World Heritage sites, the historic town of Ravenna, on the Adriatic coast of the Emilia-Romagna region, is a magnet for history and architecture buffs. What’s perhaps less well-known is that it’s also an awesome place to go kitesurfing, with decent beaches for launching, consistent winds and water that’s warm for much of the year. The AWC Kite Center at Porto Corsini in Marina di Ravenna offers rentals, lessons and even instructor courses.

2) Canoeing in the Laguna di Marano

Friuli Venezia Giulia, Italy’s most easterly region, boasts a lot of stunning coastline. But few areas are as interesting to explore as the Laguna di Marano, to the west of the pretty town of Grado. Technically a lagoon, the area is made up of a whole series of interlinked waterways which are perfect for exploring by canoe. The area is picture postcard pretty, with the thatched roofs of traditional casoni fisherman’s houses poking up between the trees on each bank. Grado itself is well worth exploring too – with waterways running into the centre of town like a mini venice.

The Mediterranean is great for all sorts of reasons – the people, the food, the kite and windsurfing – but it’s not usually known for being a surfing Mecca. For the most part, the almost completely landlocked sea just doesn’t get the same kinds of swells as the Atlantic or the Pacific. Which makes Levanto in the north western region of Liguria even more exceptional. An old fishing village in a deep water bay, the spot consistently gets good waves, and can be truly world class. Oh and it’s still great for food, people and kitesurfing too of course.

If the beautiful Lake Como looks like the kind of pace a Bond villain might build his lair, that’s because it is. The final scene of Casino Royale sees Daniel Craig shooting the wealthy Mr White outside the real-life Villa La Gaeta. But this stunning mountain lake in Lombardia isn’t just home to the rich and famous, it’s also a fantastic place to go windsurfing. Renowned for the Breva di Como, a consistent southerly wind that blows throughout the year, the lake is home to several excellent windsurfing spots and countless schools that will get novices started. Head to the village of Domaso at the northern end of the lake for the best sailing.

The name Piedmont literally means “foot of the mountains”, but it might surprise you to learn that the region around Turin boasts excellent opportunities for watersports enthusiasts as well as some of the best walking and mountain biking in Italy. It might not have a coastline, but mountain lakes like Lago Maggiore, Lago Orta and Lago Mergozzo have a rich heritage when it comes to sailing. Tomaso on the northwestern shore of Lake Maggiore or Laveno-Mombello on the eastern shore are good places to aim for if you’re keen to test out your sea (or rather lake) legs.

6) Kayaking and rafting on the Dora Baltea river

In winter the Aosta valley is a paradise for skiers, home to major resorts like Courmayeur, Cervinia and La Thuile. In the summer it’s famous for having some of the best road biking in northern Italy and some fantastic mountain bike routes. But what’s less well-known is that it’s also a great place for water-based activities like kayaking and rafting. The Dora Baltea river, fed by the glaciers of Monte Bianco, boasts some pretty serious rapids (some of which are rated Class V, the highest grade), and a whole host of rafting and kayak rental operations. If it’s thrills you’re after, this is the place for you.

Northern Italy’s Adriatic and Mediterranean coastlines are ideal for kitesurfing, but there’s also a great scene further inland on the area’s many mountainous lakes. Lago di Garda, Italy’s largest lake, is a case in point. Consistent winds and a beautiful backdrop of snow-capped peaks make it a great place for experienced kitesurfers, but there are plenty of schools along its banks that will coach complete novices too. Campione on the Lombardia side of the Lake is a great place to start.