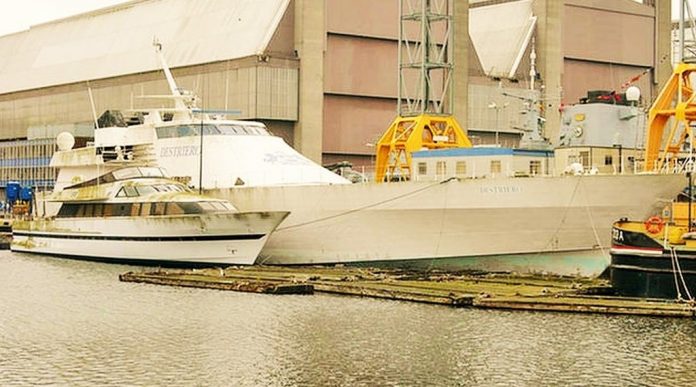 Destriero, a name that in the Middle Ages indicated the most daring and courageous workhorse, as daring and courageous was thirty years ago the idea of ​​creating the fastest ship of all time, a project entrusted to Donald Blount who made use of the support of Pininfarina, built in record time by Fincantieri in the Muggiano shipyard between 1990 and the first months of 1991. Artemare remembers it with the exhibition of objects, documents and books at its headquarters in Corso Antico in Porto Santo Stefano.

Il Destriero, an aluminum ship of 67.7 meters in length with a displacement hull at the bow and planing at the stern, with hydrojet propulsion and 60,000 horsepower, built by Fincantieri in the Muggiano and Riva Trigoso shipyards in the record time of 270 days , until that moment the largest light alloy ship ever built, one of the naval vessels with the highest concentration of efficiency, power and technology, fitted the most powerful waterjets ever developed, the hull demonstrated remarkable energy efficiency and propulsive performance with in acceleration and deceleration equal to those of a racing car. It was the first ship to cross the Atlantic with turbines associated with hydrojets, rather than diesel engines associated with propellers, and this revolution marked the beginning of the

Cesare Quondamatteo and Carlo Chiara motorists and technicians Davide Maccario, Giacomo Petriccione, Giuseppe Valenti and Michael Hurrle. For all the innovations, designs and technologies adapted to the world of the sea, the model of the Destriero was used by the US Navy for the construction of the “Litoral Combat Ships”, fast boats for coastal surveillance. The fate of the Destriero was not as prestigious, however, since the beginning of 2012 the unit is in Germany at the Lürssen shipyard near Bremen and appears to be in poor conservation conditions.

Some curiosities in the frame, the sponsor Fiat of this enterprise presented in the spring of 1992 at its stand at the Turin Motor Show a prototype called Destriero, in practice a tender on four wheels available to the crew in Porto Cervo and resuming the fashion of the “Spiaggine” of the sixties, two specimens based on the Panda car were built by the Stola of Turin, both approved with the authorization of Fiat, the first colored in a light blue sea water with white interiors, the second dark blue with the interiors light gray that was donated by the Fiat Style Center to the lawyer Gianni Agnelli.