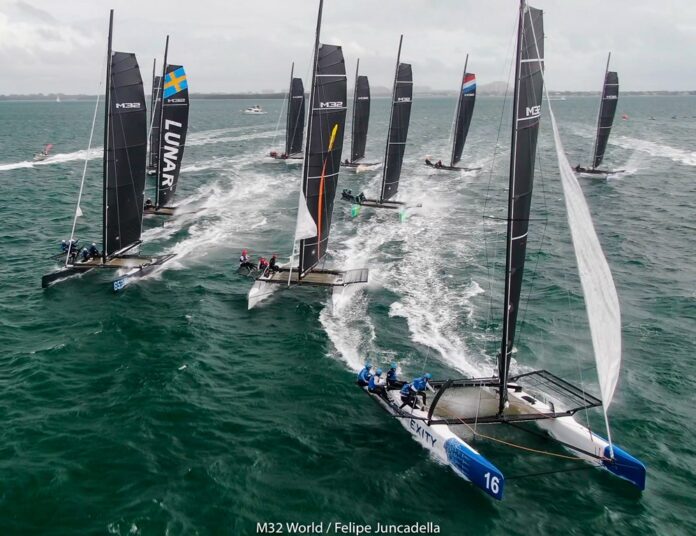 The champagne has yet to dry on the 2021 World Championship trophy in Miami as the class is finalizing the 2022 schedule with spectacular new venues and old favorites.

The Miami Worlds was two years in the making after the involuntary break last year. European and American fleets reunited 11 teams lined up for what was the, to date, most competitive Championship ever. Team Convexity with helm Don Wilson and tactician Taylor Canfield was the clear favourite from winning the last worlds in Riva del Garda 2019 and owed up to the expectations winning the regatta with races to spare. Behind Convexity there was a fierce fight for the points with much of the result list depending on the last race of the event. Second was team Catapult where team principal Joel Ronning handed the helm to his tactician Anthony Koutoun making them the only team in the fleet not fighting for the Corithian title. Corinthian Silver medalists were Inga from Sweden with Richard Goransson and Bronze Midtown Racing with Larry Phillips.

The 2022 season will hold 15 events from January to October in Europe and the USA. The class is true to their statement “Great sailing in cool places”, each location is a first class sailing venue with easy travel and fun nightlife

North America
First off is the Miami Winter Series, now in its 9th season on the flat waters of Biscayne Bay. Through a unique cooperation with Shake-A-Leg Miami the entire fleet can stay together and be moored at the same place throughout the event. Miami offers superior winter sailing and many teams, both American and European, make this their winter base. After the last Miami event in April the fleet heads north to classic sailing venue Newport, RI for the Midtown Cup with all the teams based at the newly established Midtown Sailing Center downtown Newport and crawling distance from the Midtown Oyster Bar. The last event of the series is also the North Americans and timed so that boats can be shipped with some margin to the Worlds in Europe. “We structured the 2021 calendar to maximize events in the US before the fleet heads to the Worlds in Europe next fall” explains Dave Doucett M32 NA. With Newport already now the decided battle ground for the 2023 Worlds the Newport fleet is growing.

Europe and the Worlds
The European season begins on Lake Garda in May where the class has found a home in Riva in the very north end of the lake. From Italy the fleet goes north for a June event in Holland and in July bucket list sailing place Marstrand on the west coast of Sweden. The class goes back to Riva for the European Championship in September before the main event of the year; The World Championship in Cascais, Portugal, in October. Mattias Dahlstrom, Class Manager and PRO comments “Having the the 2022 schedule set with the worlds in Cascais and a 2023 worlds in Newport is crucial for teams to plan ahead and to grow the fleet”

Join the Fleet
In the winter a number of Warm Up Events will be held in La Spezia and Lake Garda, Italy for new teams to get used to the boat and for established teams as a training session to get ready for the season. Also lease boats will be available in Miami for getting to know the boat or join the racing directly. These events are the most straightforward way to join the class and the M32 Academy has an established pathway for new teams. A tailor made program is made based on your background, be that windsurfing, keel boats or multihull, and, if needed, you will get help with pro crew and a sailing coach.

Distance Racing
Many teams plan to join established distance racing chasing line honors and record times. Some of these are the Around Martha’s Vineyard Race for the Newport fleet. In Europe M32 teams are attracted by the classics Tjorn Runt on the Swedish west coast and the Trofeo Riccardo Gorla on Lake Garda the weekend before the Europeans in Riva del Garda.

New Class Board and Future
During the Annual Class meeting in Miami a new strong board was formed to bring the class forward to next year’s Worlds. The members are now Ian Williams GBR, Jerry Kirby USA, Harold Vermeulen NED and Bill Ruh USA joined by builders rep Dave Doucett and Class Manager Mattias Dahlstrom. Tod Reynolds and Ryan McKillen were thanked for their hard work on building the fleet and building up the most successful Worlds to date in Miami.

The 18th PalmaVela will run from May 1st to 8th, 2022. These are the dates that have been confirmed for the showcase...
Read more
Regatta

The new year kicks off a busy program of popular international regattas at Yacht Club de Monaco with back to back one...
Read more
- Advertisment -