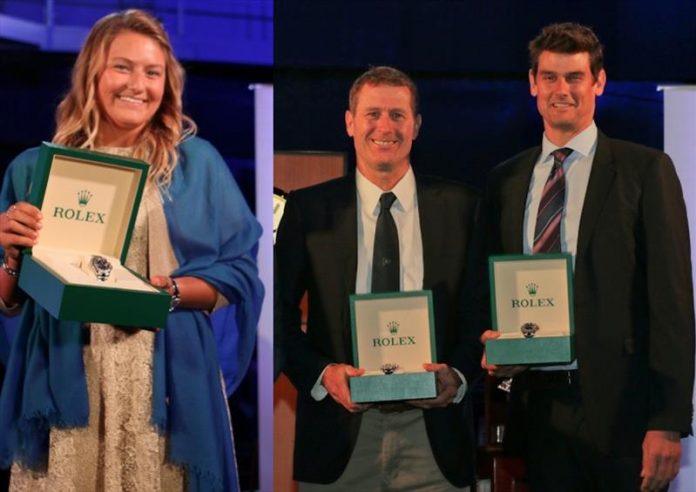 US Sailing’s annual Rolex Yachtsman and Yachtswoman of the Year Awards are two of the biggest honors that are awarded to U.S.-flagged sailors each year, and on the evening of Thursday, February 6, aboard the USS Midway at San Diego’s Navy Pier, International 505 sailors Mike Martin and Adam Lowry and IKA Formula Kite Class sailor Daniela Moroz received these honors for the 2019 sailing year. Martin and Lowry received their Rolexes for winning the 2019 International 505 Worlds, which were held on the waters off of Fremantle, Australia, while Moroz took home her engraved timepiece for battling her way onto the top step of the award’s podium at the 2019 IKA Formula Kite Class World Championships, which unfurled on the waters of Italy’s Lake Garda.

“It is all about business out on the water, but we have fun and it was a great year,” said Lowry at the awards ceremony.

For his part, Martin focused on the collaborative effort needed to claim the top spot at last year’s 505 Worlds. “Sailing is a team effort and I want to thank Rolex for supporting our sport,” said Martin, who had been shortlisted for this prestigious award six times prior to last Thursday’s ceremony, in an official US Sailing release.

Impressively, 2019 was Martin’s fourth International 505 Worlds win, and it was Lowry’s second time claiming the World Championship title in this competitive class.

While Moroz isn’t even 20 years old, this year’s award represents her second time earning this accolade, having also been chosen for the award in 2016. “I turned 19 last week and today I have a Rolex from US Sailing and this prestigious honor,” she said at the awards ceremony. “I want to congratulate all the other finalists and those that have come before me.” (Editor’s note: Moroz was the youngest sailor to have collected a Rolex Yachtsman or Yachtswoman of the Year Award when she won it for the first time in 2016.)

Sail-World tips our hats to the three Rolex Yachtsman and Yachtswoman of the Year Award winners, and we thank the seven other individuals and organizations for their hard work and valuable time that they dedicate to making our sport a great one.

Meanwhile, this is a big week for U.S. Olympic hopefuls as it marks the start of four world championship regattas that will be used to determine which athletes get to represent the Stars and Stripes at the Tokyo 2020 Olympics (July 24 – August 9). Specifically, the 49er, 49er FX and Nacra 17 Worlds are playing out on the waters of Port Phillip Bay, off of Melbourne, Australia from February 9 to February 15 and February 16 (respectively). Additionally, the 2020 Laser Worlds are also playing out just across the bay from February 11-16.

While Canadian- and U.S.-flagged 49er, 49er FX and Nacra 17 sailors arrived with the best of intentions to race on the first day of these high-stakes regattas (Monday, February 10), Mother Nature proved uncooperative by delivering 25-30 knot winds, which kept these high-performance boats ashore. (N.B., the USA did not win country qualifications for the 49er for the 2020 Tokyo Olympics, however five U.S. 49er teams are still competing as the USA is first in line to claim any forfeited spots.)

Racing is expected to take place for all four of these world-championship titles on February 11, so be sure to stay up-to-date as results become known.

11th edition of Yare, Yachting Aftersales and Refit Experience, taking place in Viareggio - Italy from the 20th until the 22nd of...
Read more
Awards

On the occasion of the 61st Salone Nautico in Genoa, Swan Shadow has been awarded, in the Superboat category, above 10 meters,...
Read more
Events

A young and ambitious Swiss team, led by Olympic sailor Sébastien Schneiter from Geneva, will compete next season in SailGP – the...
Read more
- Advertisment -