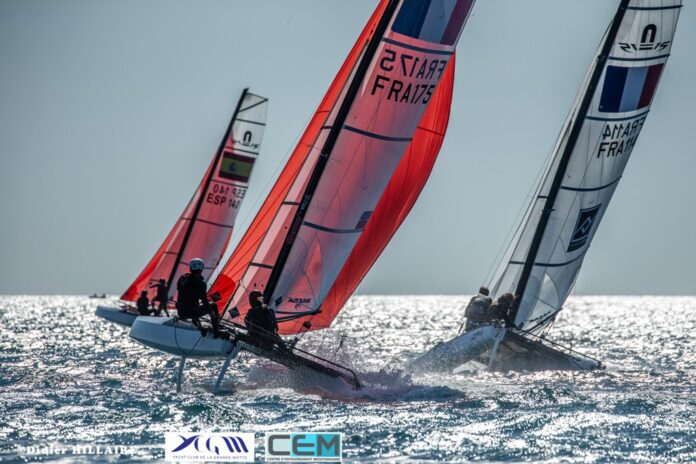 More than thirty knots of wind and a seaway of more than two metres today, Sunday, off La Grande Motte forced the 73 crews who are making ready for the start of the Nacra15 World Championship to remain ashore today. The planned training races were cancelled. So the sailors will be straight into action on Monday at 11:45 am for the first points races. But having missed the official training, the forecast is promising for the first contests. There should be a mistral, northerly wind of 15-20 knots and late season Mediterranean sunshine.

The Nacra15 World Championships were officially opened on Sunday when the opening ceremony was held under cover, out of the unseasonal wind and rain.
The 73 crews, their coaches and some of the 70 volunteers who collaborate with the Yacht Club Grande Motte to deliver the world championship event all mustered at 11:30 am this morning to share in the official opening speeches. The night before all already met up and enjoyed a friendly, fun competitors dinner.

Under normal weather conditions the second part of this opening day should have been given over to official training races. But the weather decided otherwise. It was not deemed prudent to send the Nacra15s in 30 to 35 knots of wind and big waves, especially on the eve of their major championship.

The teams remained ashore. Some went to the movies, others to participate in a Laser Game. For the six strong British team who have been here  since Monday, the priority has been to relax. While around twenty crews have taken the opportunity to participate in the coaches organized informal racing ahead of the event, a large part of the fleet that has just arrived at La Grande Motte at the end of the week, has not yet had the opportunity to train on the racing arena.

The race management has therefore decided to organizing a warm-up lap just before racing on Monday.

The sailing conditions should be ideal. Tonight, the wind will shift from the southeast to the northwest. It is therefore in a small mistral and under the sun that the tandems will compete on a series of windward-leeward courses.

Sailors - coffee in hand - trickled down to their boats at the Shake-A-Leg Miami waterfront center on day one of the...
Read more
Sport