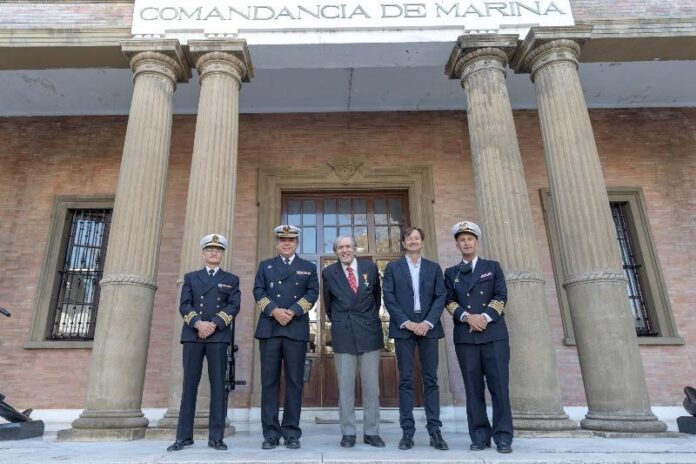 British sailor Jimmy Cornell received an award for outstanding services related to National Defence on Friday by the Spanish Armada in the presence of the crews, key members and the co-founders of Grand Large Yachting.

The participants set sail on Sunday for an adventure of a lifetime that will last almost three years. The voyage, designed by Cornell and organized by Grand Large Yachting, commemorates the first circumnavigation around the globe that departed precisely from the same place just over 500 years ago.

On Friday morning, Xavier Desmarest, Co-Founder and General Director of Grand Large Yachting, along with members of the press, crew and fans witnessed Carlos Maté San Román, Captain of the Secretariat of the General Staff of the Navy and Javier Albert Pérez, Commander of the Naval Headquarters of Seville, award Jimmy Cornell the Cross of Naval Merit, a recognition given to military or civilian personnel for having rendered outstanding merit-based services related to National Defence.

Commander Javier Albert Pérez presented to each crew the commemorative flag of the Fifth Centenary of the first round the world voyage, which each ship will carry on board during the journey of almost three years.

Later that day crew members gathered for the symbolic ceremony of lighting candles at the Church of Santa Ana de Triana, from which Magellan and his fleet also departed 500 years ago and where Elcano was presented in thanksgiving on his return.

For many of the crew members, this marks the beginning of a voyage of a lifetime. Almost 100 sailors from 13 different countries will be setting off for an adventure that will span thirty two months.

Bristol-based Kingsley and Katherine Webb being one particular couple, who are sailing with newly trained skipper and good friend Jim Dumbrell aboard Inky Blue, an Outremer 51.

“I’ve known Kingsley for 25 years, we both lived in Bristol, enjoyed the same things. Kingsley has always loved sailing for as long as I can remember, and has wanted to sail round the world for a very long time. He eventually decided to do it on an Outremer because they are such an amazing craft for blue water sailing,” says Jim.

Swiss couple Vincent and Fabienne Jeanneret purchased Crazy Flavour, an Outremer 51 in 2015, and in 2020 both left the careers they had been in for over 20 years as a judge and lawyer respectively, to sail around the world.

“We wanted to have an adventure, and being part of the Grand Large Yachting World Odyssey 500 allows us to go to places that would be harder to get access to on our own. We also have the assurance of being provided constant support and assistance, including spare parts and repairs which is helpful,” says Vincent.