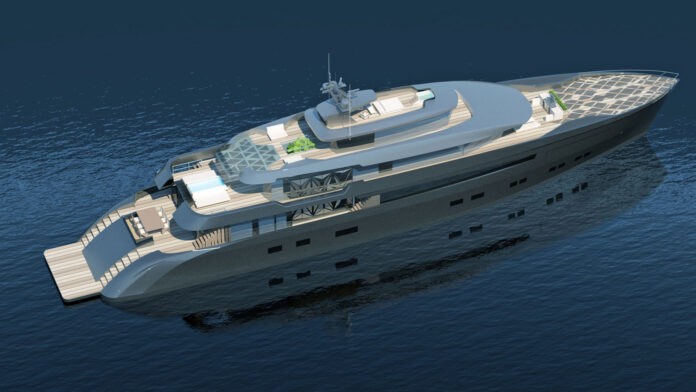 Romanian designer Ioana Valentina Corcodel has been shortlisted for this year’s BOAT International Young Designer of the Year Award after submitting her designs for a 65 meter eco-conscious concept named Ophelia.

The concept spans five decks and is characterised by geometric solar panels that cover its exterior to generate green energy and increase efficiency. The exterior pairs futuristic-looking, metallic materials with traditional teak decks.

Another green element used in the design is a kinetic solar-sensitive blind system on the side windows that can be programmed to open and close depending on the sun radiation to provide a comfortable environment inside and reduce the use of air conditioning. The interior also has a dancefloor space conceptualised with angular, energy-generating panels that will be activated from the movement of guests’ footsteps.

Corcodel described the interior design as suited to an owner who “needs a comfortable space where he feels at home because he will be [on board] for a long time”. The owner’s cabin is therefore a split-level suite with an open atrium space and a private library and office for remote work. Interior spaces are finished with “warm tones of wood” and a variety of plants and greenery to create a feeling of wellbeing on board. There is even an “atrium-style garden” and a wellness space on board.

Other features shown in the renderings include a cocktail bar, al fresco dining spaces, a swimming platform and a flybridge complete with a daybed for sunbathing and a forward hot tub.

Based in Milan, Corcodel has previously worked with marine design firms Alberto Simeone and Jalmare Oy.

The winner of the 2022 Young Designer of the Year Award will be announced at the Superyacht Design Festival in Milan from 22-24 June 2022.