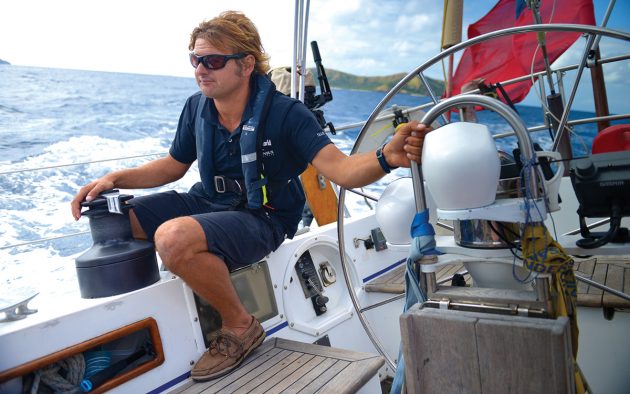 Pushing off from the Galapagos Islands 3 weeks ago, the coronavirus was only starting to affect Europe. The first villages were being quarantined in Italy, and a handful of cases were emerging in the UK. A blip on the news, this did nothing to rock our happy World ARC fleet.

We were busy frolicking with sea lions and preparing for the rally’s longest ocean passage, stocking up, refuelling and preparing to cut ourselves off from the world, in to the beautiful calm and all-consuming bubble that is a watch system at sea.

The trickles of news that came through at first were largely sanitised – many of our crew make it clear that they don’t want news from home, after all there is nothing we can do. As the situation deteriorated more rapidly, the view from home was: “The world has gone mad, enjoy your blissful ignorance while you can.”

Our first 1,000 miles flew past and life was great, but then reality started to catch up. The first updates concerned small changes to entry protocol, non-EU crew requiring return air flights rather than the usual bond, signed declarations of health and copies of travel insurance, closely followed by a notification of quarantine – anyone by air required 14 days isolation, effectively cancelling our incoming crew change. Those at sea could count their passage time so it was ok for us.

The general expectation was still to be able to clear into French Polynesia, cruise around a bit and then deal with complications further down the line as we started to hear that Tonga and Niue, New Zealand and Australia were denying entry or requiring further quarantine.

The news from home got worse by the day, and the common thread was that we were in the best place – and being fairly self sufficient, competent fishermen and supplied with staples and emergency food for a couple of months, life could be worse – just find ourselves an atoll and live like Tom Neale as a hermit and beachcomber for a while – pleasant delusions on a late night watch.

With 500 miles to go, the bombshell drops: World ARC has been ‘suspended’. Understandably it is not possible to continue, most of the Pacific is closed to us, there is the option of rejoining the 2021 rally, or continuing on if the situation reverses, but in any case we would be unlikely to make the weather window in the Indian Ocean, so a delay is inevitable.

World ARC worked tirelessly to keep us up to date, and lobby for our interests, being in a pack is reassuring. However when we received the message ‘We are working hard with the local authorities in French Polynesia to welcome you as planned, and not treat you as refugees and set you back off to sea’ it did incite a certain degree of panic.

From here on things changed quickly, our rendezvous switched from Hiva Oa to Nuku Hiva – a bigger bay with more facilities, and as it later turned out a police presence. There was an indication that the Marquesans were not very enthusiastic that we were arriving, the islands are small, with very limited supplies by freighter and the local ‘hospitals’ may have only a handful of beds. Feelings are particularly strong given the population was decimated by European disease in the 19th century – the tourist economy is negligible, the epidemic inevitable and the priority is clear.

After 12 hours of heading north west, the fleet has now been diverted again, Tahiti this time under the request of the French authorities and the Coastguard, adding an extra 700 miles on to the passage and skipping the best parts of French Polynesia. All pretence of a fun and relaxing cruise has now gone, and in a world of rapidly closing boarders we are pleased to be assured of being granted entry, to anywhere.

It is clear that neither the French authorities or World ARC would like yachts to stop in the Marquesas and have stated that any boat that arrives will not be able to leave to another anchorage in French Polynesia. Period.

The main consideration for many is the news of swift enforced repatriation of all non-residents, which could mean leaving the yachts at anchor in the bay. There are some yachts that genuinely need to stop here, with engine and rigging failures – but others who wish to stock up on fuel and food. After a fairly fast crossing it surprises me that boats didn’t include a 30% safety factor on the provisions.

The USA boats plan to pit stop and then push ‘home’ to Hawaii – 2,000nm on a fast reach. (Recent reports suggest around 60 cruising yachts are in the Marquesas, and that it is likely they will be authorised to move to Tahiti)

As most of the fleet now heads to Tahiti, separated by nearly 1,000 miles. We are one of the first arrivals due in shortly, but at the time of writing (March 23) we have been told that territorial waters are now closed to all vessels, except for the World ARC and Puddle jump rallies. I’m not sure what it would mean in practice, and I’ll be happy not to find out.

What awaits us in Tahiti is uncertain. A secure berth and repatriation seems the most desirable if the air space isn’t shut down by the time we arrive. The measures in France are echoed here, no one is allowed out without a written purpose, and then just one person per household or yacht. Fiji is still open to yachts, but is 2,000 miles away and when ports are seemingly refusing refuge, it’s not a risk worth taking.

The last option is the long way home through the Atlantic via Cape Horn. At 4,000nm, it’s almost as close as the Galapagos we just left.

The 41st Rolex Middle Sea Race is virtually done and dusted. Only one boat is left at sea, her crew clearly set...
Read more
Events

The Sultanate of Oman will host a 400-strong fleet of the world’s best sailors when the World Championships for three Olympic classes...
Read more
Regatta