Home Yachts Motor Yachts How engineers in the 1980s broke the 50-knot barrier and made the...
YachtsMotor YachtsUncategorized 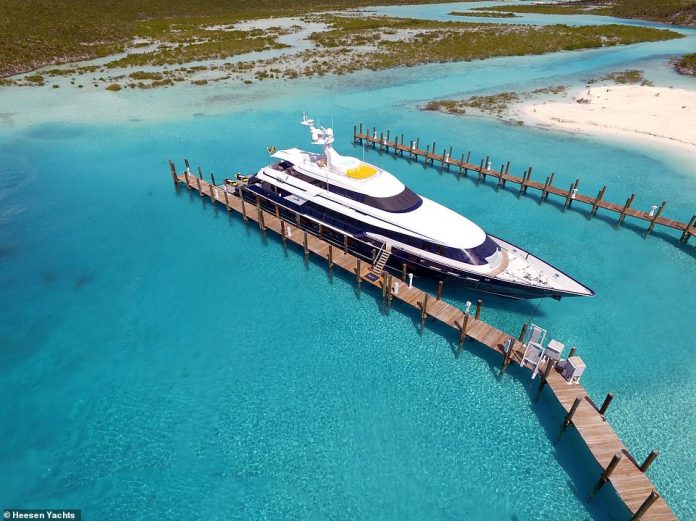 They said it was ‘the superyacht that couldn’t be built’.

When American entrepreneur John Staluppi decided in the early 1980s that he wanted the fastest superyacht in the world – one that could break the 50knot (57.5mph) barrier – every boatyard told him it couldn’t be done. Every boatyard except Heesen Yachts in the Netherlands.

It rose to the challenge in spectacular style, delivering Octopussy in 1988 – a boat the size of a small house that was actually capable of a world-record-beating 53.17 knots (61mph). And now a new documentary has revealed the fascinating story behind this remarkable feat of engineering. 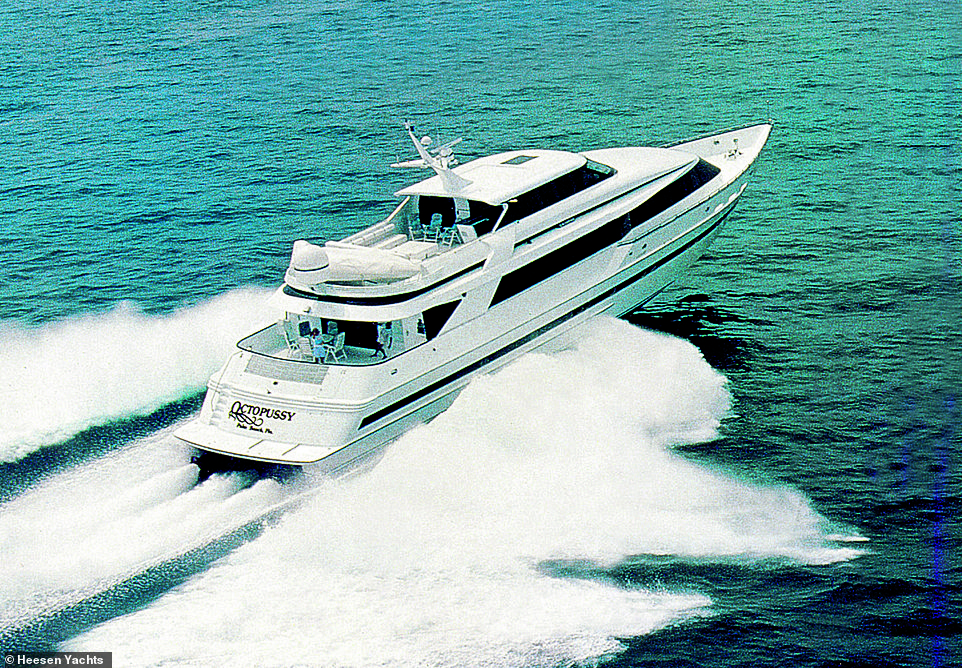 Octopussy, pictured shortly after it was delivered. It had a top speed of 53 knots (61mph) and at the time was 38m (124ft) long 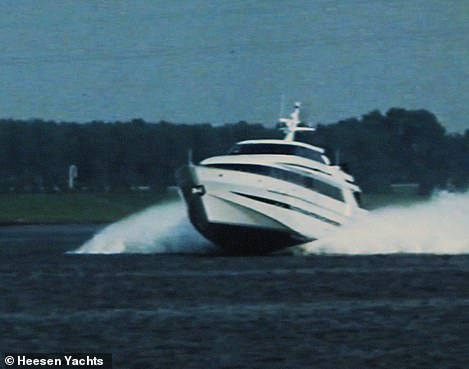 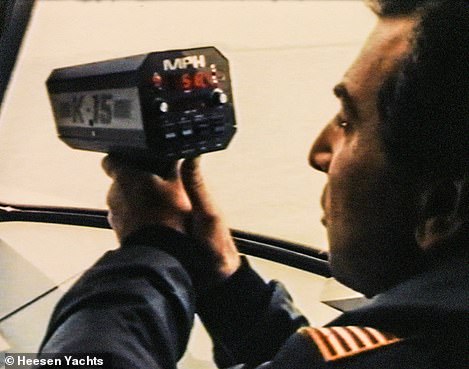 Octopussy, pictured left in the 1980s, was designed by Frank Mulder and built at the Heesen shipyard. Pictured right is John Staluppi using a radar gun to measure precisely how fast the yacht can go

Called Octopussy: The Yacht That Could Not Be Built, it tells how Staluppi, after investigating the highest horsepower engines available, took the unprecedented step of buying three immensely powerful MTU power units and went looking for a naval architect to design a boat around them.

But it was an order too tall for everyone he approached. 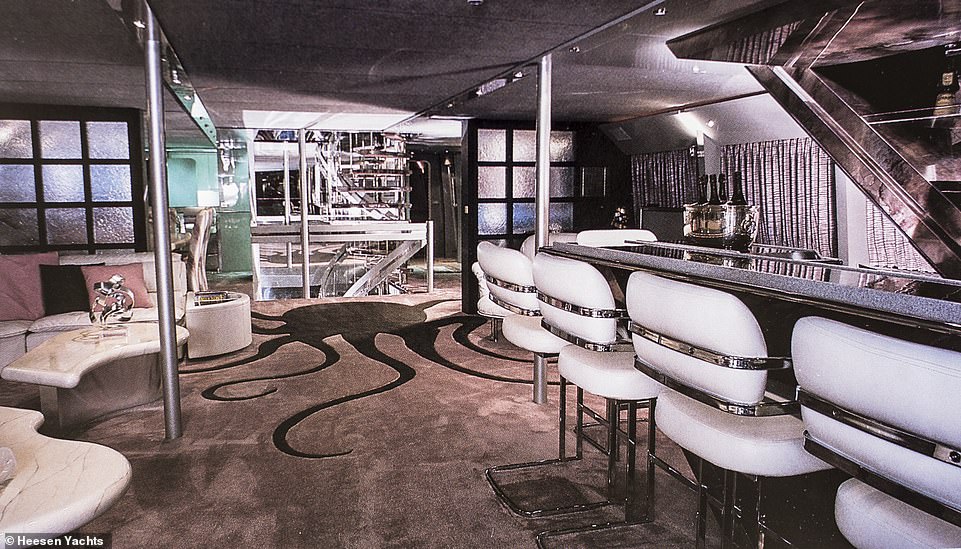 The original Octopussy interior. A new documentary has revealed the fascinating story of how engineers turned businessman John Staluppi’s dream of owning the world’s fastest luxury superyacht into reality 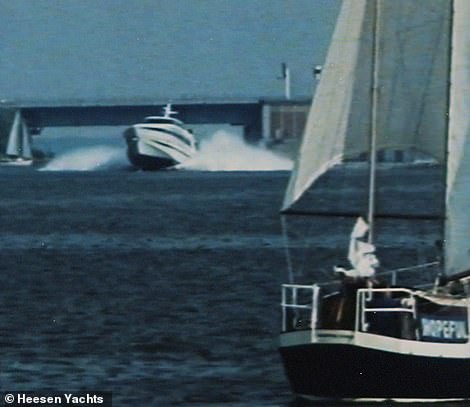 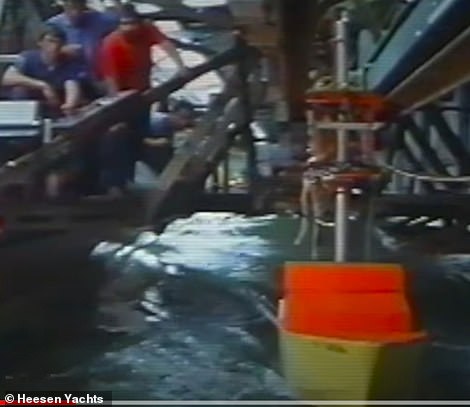 Heesen agreed to a legally binding penalty clause in the contract stipulating that if Octopussy did not reach 48 knots (55mph) at launch, Staluppi would not have to take the boat or pay for the cost

However, Frank Mulder of Mulder Design, a skilled naval architect from the Netherlands, after six weeks of calculations, said the project was possible.

Staluppi continues: ‘Mulder said that he only knew one shipyard that might take the challenge. And that’s how we got started with Frans Heesen, who was supposed to be the best.’

Shortly after, in a meeting in Fort Lauderdale, Heesen accepted Staluppi’s challenge to build the fastest superyacht in the world.

In an age before computers, he was the first to say that ‘if he [Mulder] comes up with the right drawings and calculations… then I will build you this boat’. 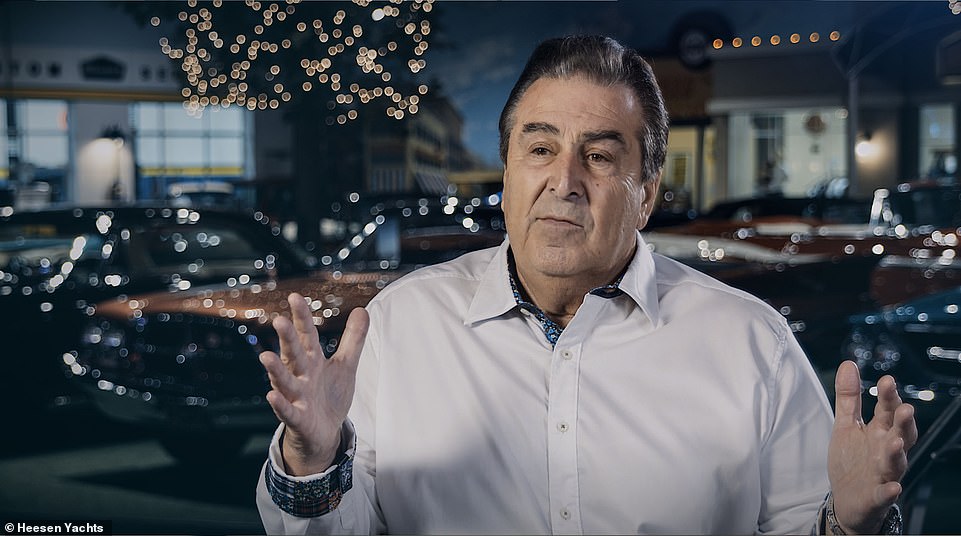 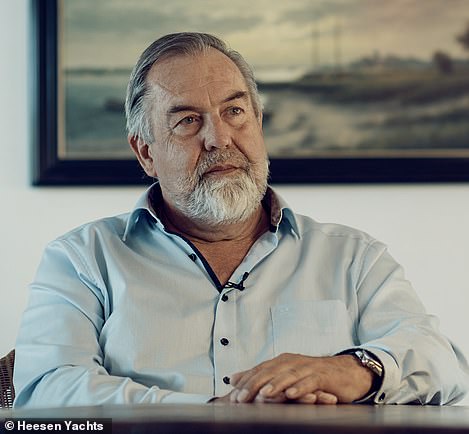 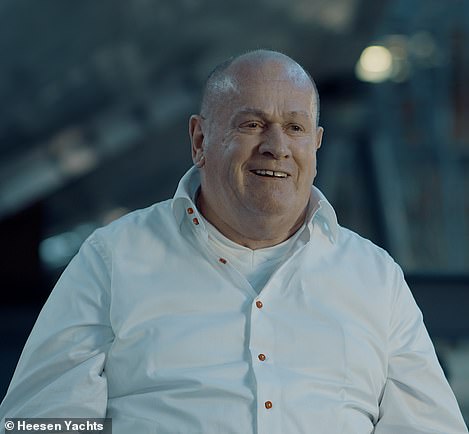 Naval architect Frank Mulder, left, and Frans Heesen, right, the founder of Heesen Yachts. They both feature in the new documentary about the construction of Octopussy 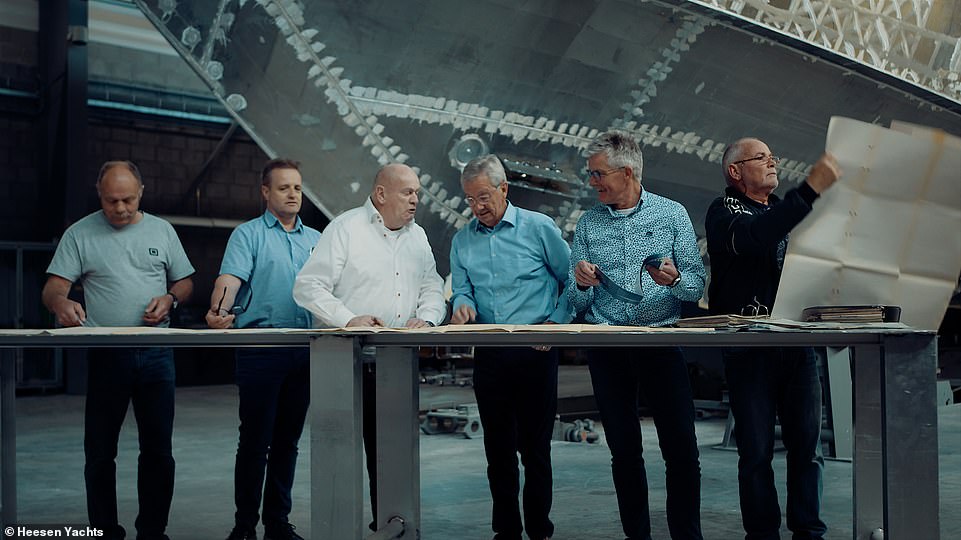 The documentary reveals that Heesen was so supremely confident in his team’s engineering and craftsmanship, he even agreed to a legally binding penalty clause in the contract that if Octopussy did not reach 48 knots (55mph) at launch, Staluppi would not have to take the boat or pay for the cost.

Staluppi said: ‘It was a risky challenge for a shipyard – if it went under 48 knots, I didn’t have to take the boat and they’d give me all my money back. 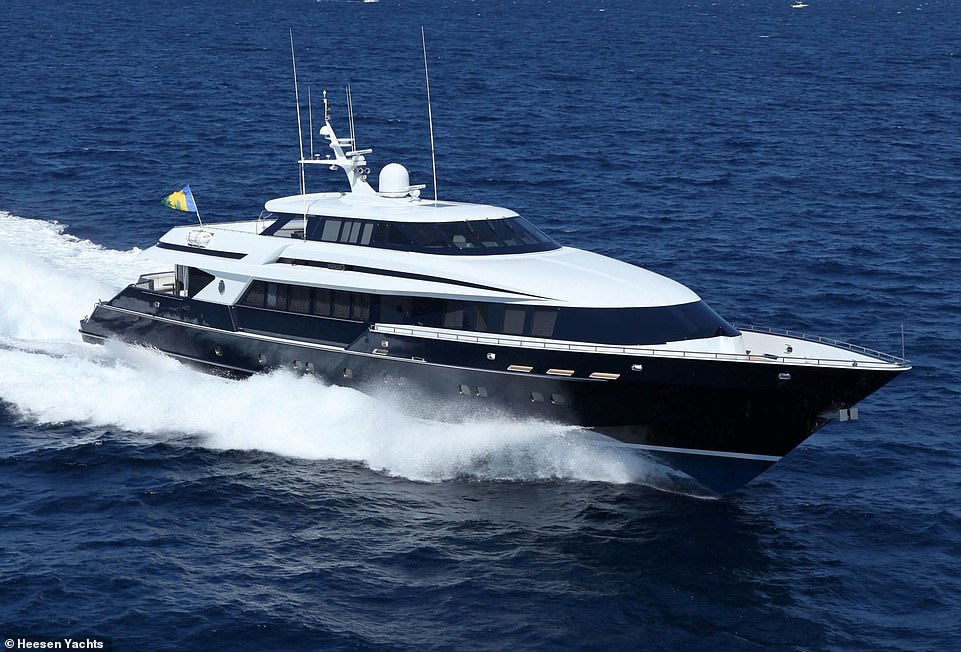 In 2015, Octopussy underwent a complete refit and is now 44m (144ft) in length. Pictured is the updated version of the yacht 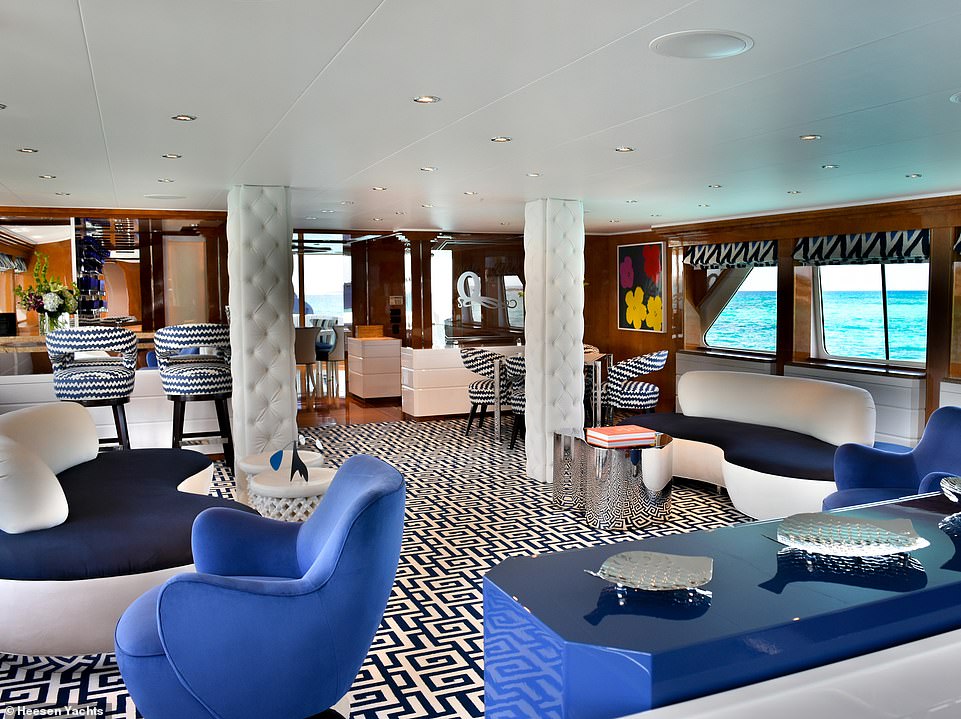 Octopussy’s interior was also updated during its refit. Its new look is thanks to New York designer Jeff Lincoln 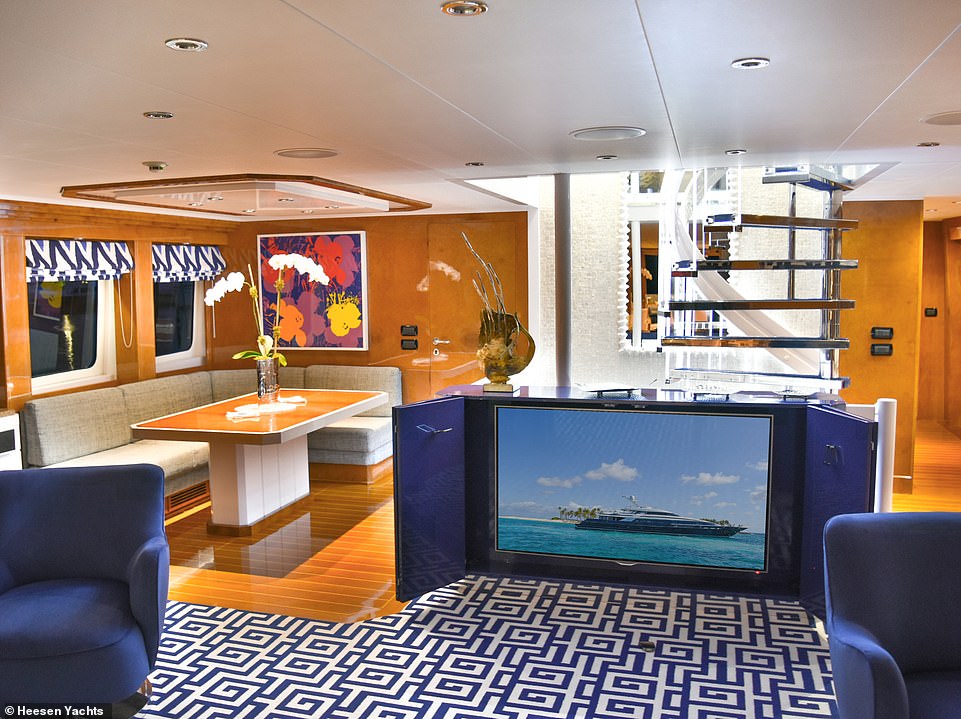 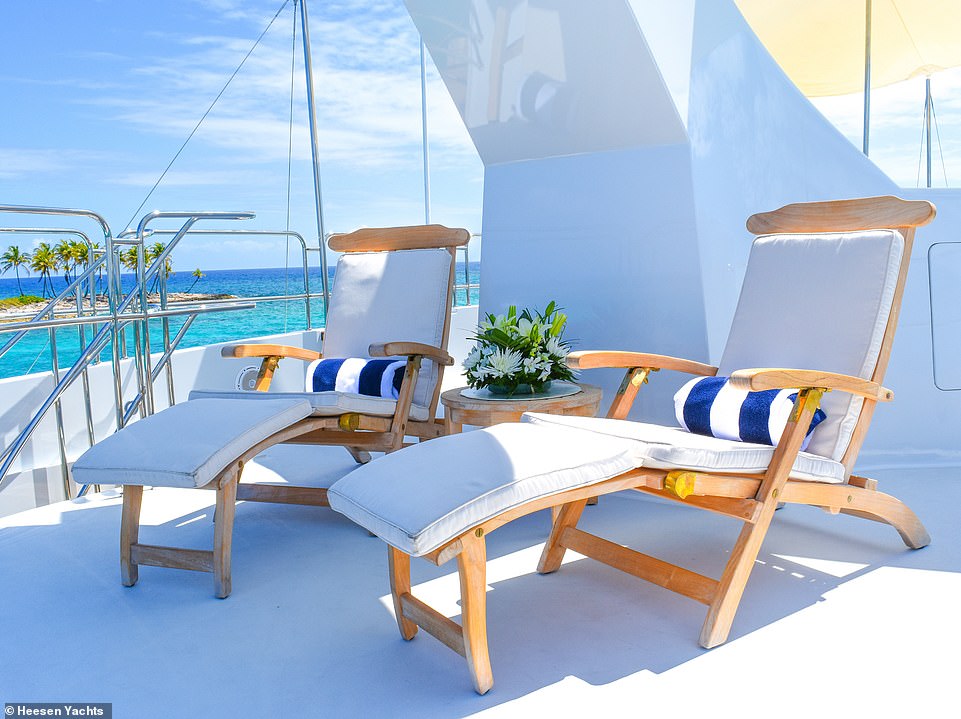 When it was being built, all parties worked around the clock to ensure that Octopussy, pictured recently, would hit the goal of being able to reach 50 knots (57mph) 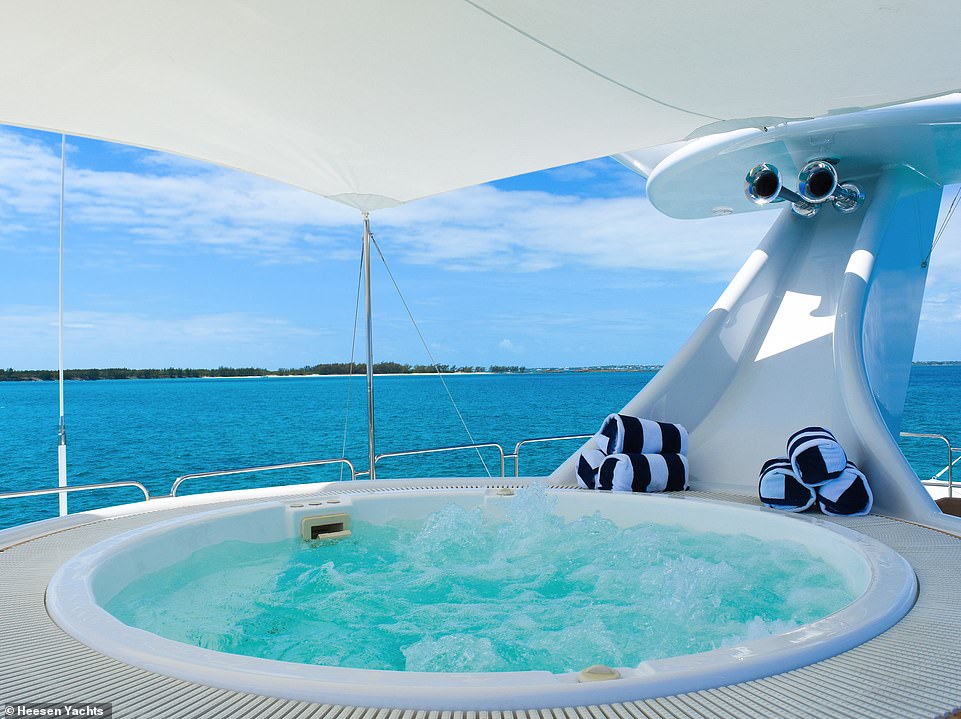 The hot tub on board the re-fitted Octopussy. The superyacht is now 20ft longer than it was at launch 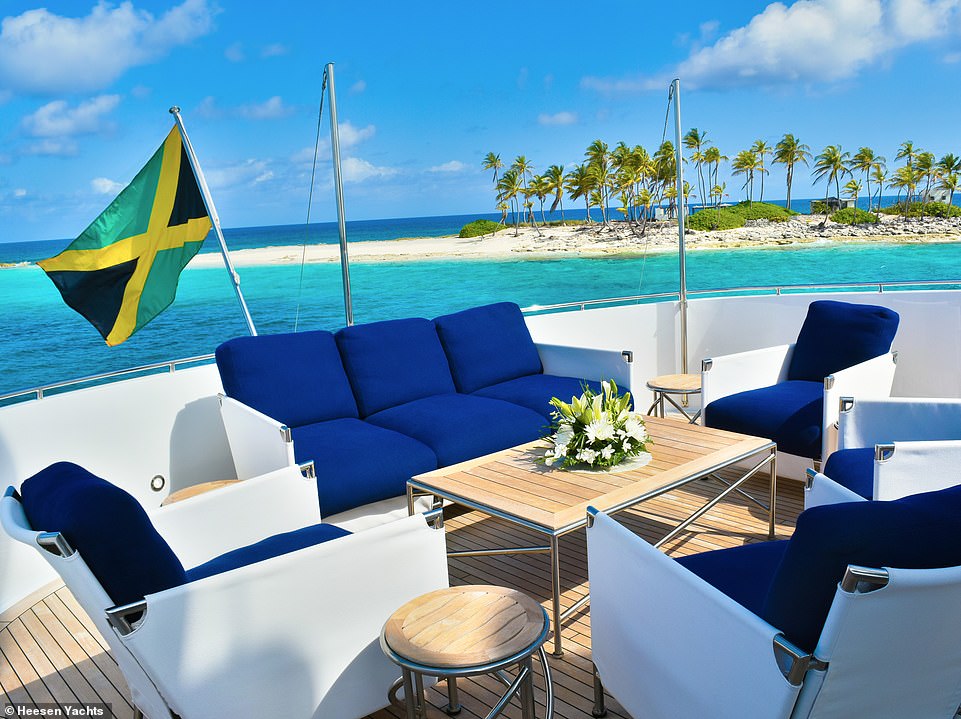 According to Moran Yacht and Ship, Octopussy is ‘perfect for island hopping and allows access to anchorages normally reserved for much smaller vessels’

Financially the yard could not survive such a loss, but the documentary shows that with the international press following Staluppi’s every move, an ambitious Heesen decided to risk the entire future of the company for the opportunity to put the shipyard’s name on the global stage.

From then, each decision, from the water jets specified to the appliances that Staluppi’s wife, Jeanette, chose were defined by weight.

All parties worked around the clock to ensure the boat was as light as possible to facilitate hitting the 50-knot goal.

When it was launched in April 1988, Octopussy not only looked sleeker than any other yacht at the time with its futuristic design, but exceeded all expectations with its astounding top speed of 53.17 knots (61mph). That’s very fast indeed for a boat 38m (124ft) long, packed with luxurious features. 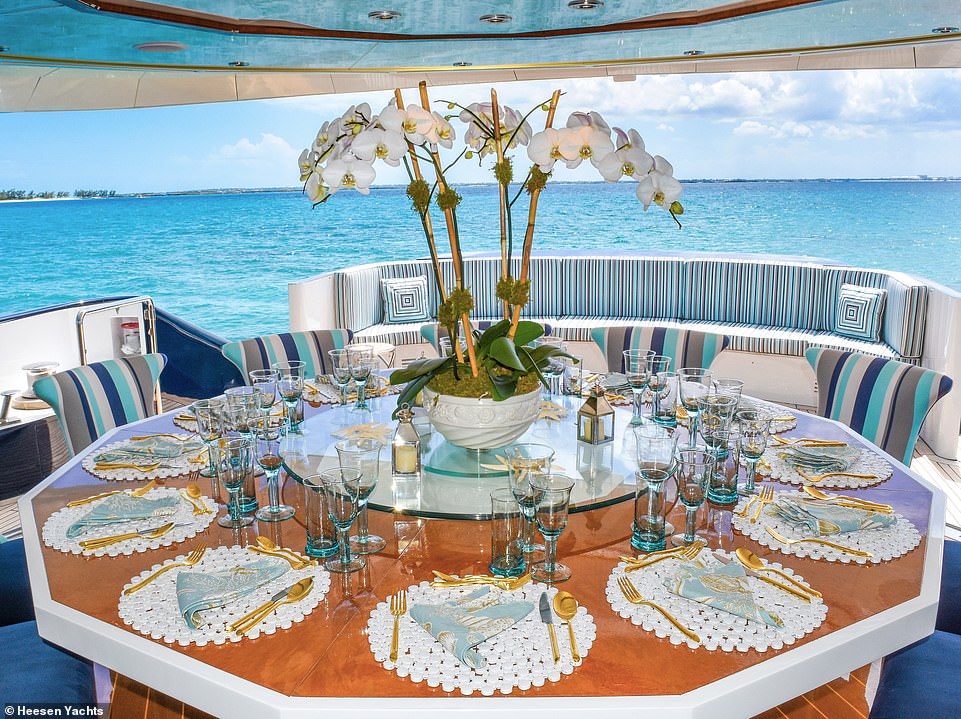 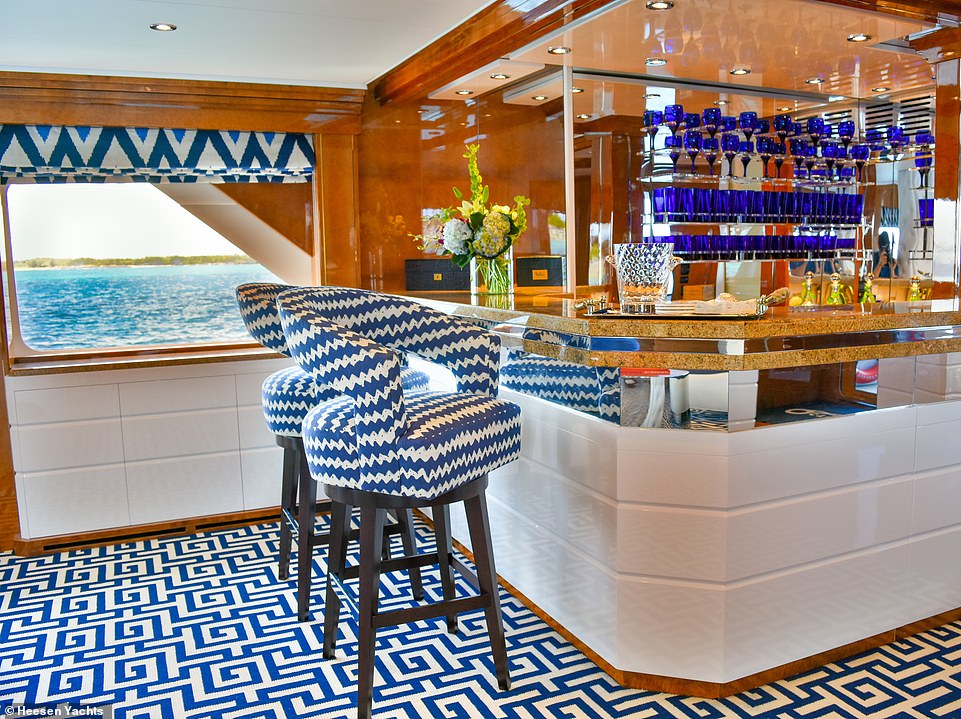 Octopussy now has five spacious staterooms, a vast main salon and a formal dining area with floor-to-ceiling glass doors, which open out on to the main deck 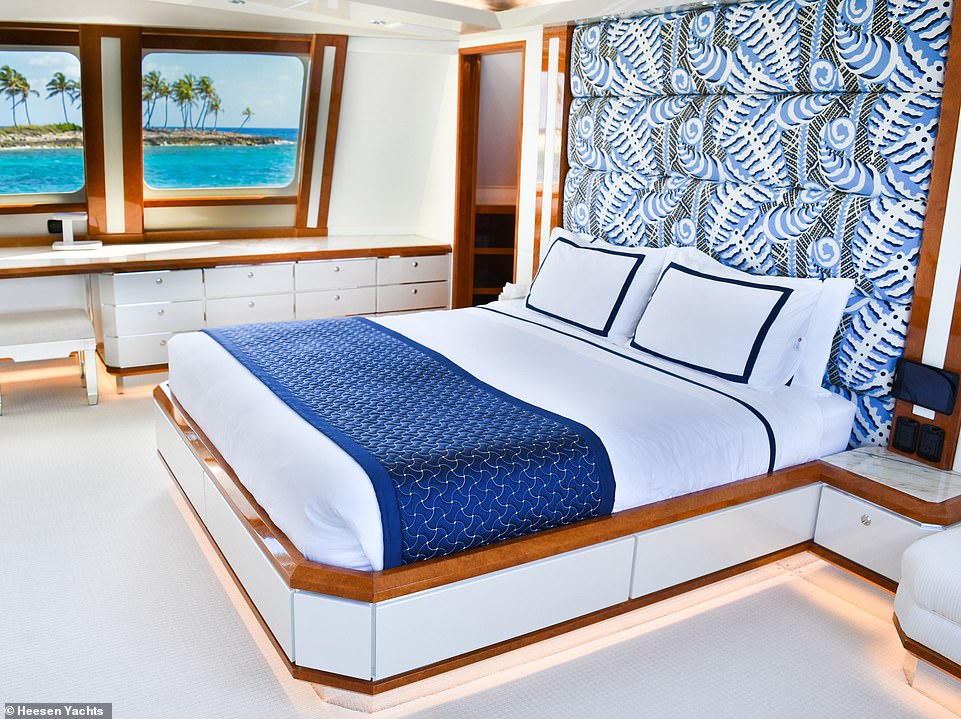 One of the five spacious staterooms on board Octopussy. It has space for 10 guests as well as seven crew members

Heesen Yachts said: ‘Her speed and design became the benchmark for other shipyards and Heesen’s reputation for boldly delivering world firsts based on a DNA of innovation, technology and top craftsmanship, was born.

‘The gamble had paid off. Staluppi realized his dream and Heesen Yachts became an international sensation, forever marking its brand on the world map as a major player in the superyacht arena.’

In 2015, Octopussy underwent a refit with the length of the superyacht extended to 44m (144ft), while New York designer Jeff Lincoln updated its interior. 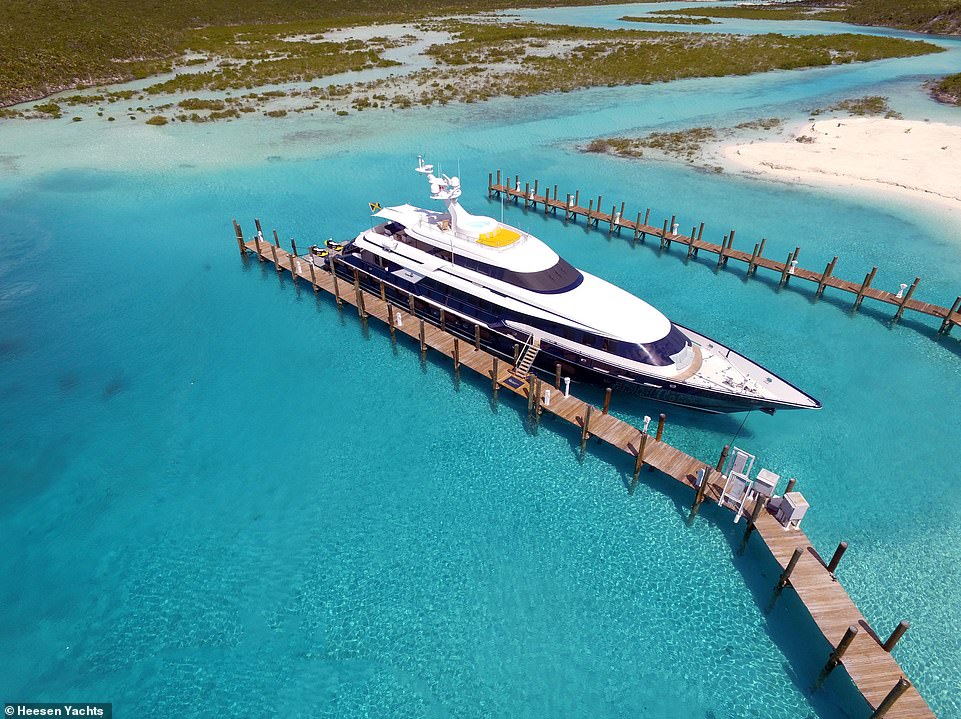 Octopussy pictured moored in the Bahamas. The current fastest superyacht in the world is the 140ft ‘World Is Not Enough’, which has a top speed of 70 knots (80mph)Octopussy

It has five spacious staterooms, a huge main salon and a formal dining area with floor-to-ceiling glass doors, which open out on to the main deck.

The current fastest superyacht in the world is the 140ft ‘World Is Not Enough’, which has a top speed of 70 knots (80mph).

Built in 2004, the vessel was also designed by Mulder Design and is the brainchild of Staluppi and his close friend, businessman John Rosatti.

While Octopussy can now ‘only’ reach 32 knots (36mph) – she’s a lot heavier post-refit – the speed achieved in 1988 is a record that still puts her in the top 20 fastest superyachts ever.