Home Yachts Superyachts The Tetrahedron Superyacht Concept, the Boat That Can Fly But Never Did
YachtsSuperyachts

The Tetrahedron Superyacht Concept, the Boat That Can Fly But Never Did 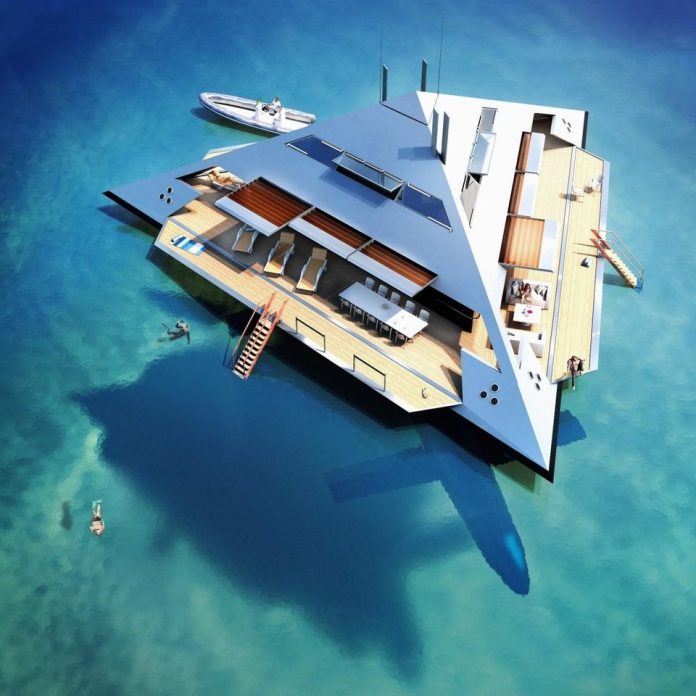 At the intersection between the naval industry and aviation is a superyacht concept that would best be described a flying boat or, in the words of architect Jonathan Schwinge, “aviation at sea.”

The Tetrahedron Superyacht Concept (or Tetra, for short) is the boat that can fly, in the words of the same architect in whose mind it was born. Sadly, though it came thisclose to becoming a reality, it never did. But that shouldn’t stop billionaires from dreaming it could still happen, right?

Tetra took all yacht design principles and turned them on their head. Drawing inspiration from aviation, it proposed a superyacht that was basically a pyramid structure (made of carbon fiber and stainless steel) sitting on a single strut, attached to a torpedo hull underneath the waterline. When stationary or traveling at low speed, the pyramid floated but, when it picked up speed, it rose above the waterline as if it were flying.

As renderings in the gallery attached show, it was something along the lines of an Imperial Star Destroyer, a striking build that was menacing in its minimalism, yet promised high efficiency and the utmost luxury. The renderings were made public to great fanfare in 2016 and, throughout the rest of the year and the following one, Schwinge kept saying he was in talks with a German shipyard to make it happen. It’s been radio silence on that front ever since.

In 2016, Schwinge was telling Forbes, “We are currently working with a large superyacht yard and the design has been developing forward. Much of the development has a new feel – the ‘Trimaran’ 3 hull has now been replaced by a black coated ‘bat-form hull’ with special retractable ocean landing systems.”

Had Tetra been made in the original form, it would have benefited from a hull called HYSWAS (Hydrofoil Small Waterplane Area Ship), meaning the pyramid with the strut, attached to the torpedo-shaped hull. Side-mounted adjustable hydrofoils could lift the vessel out of water at high speeds, allowing for smooth traveling with virtually zero rolling and slamming through rough water.

In turn, this would have completely eliminated seasickness, by delivering the smoothest, quietest cruise imaginable. Considering that Schwinge imagined it reaching top speeds of 38 knots when above water (and 15 knots during “takeoff”), that is a real selling point right there.

Moreover, “an auto-pilot ‘fly-by-light’ system taken from the aviation industry would control difficult roll forces and maintain foil born speed. This would also control pitch and heave,” the designer explained at the time.

When not traveling at full speed, the pyramid would float on three underbelly hulls. Technically, the Tetra was a trimaran, but one that was attached to the torpedo hull, which meant it could “fly.” Well, the closest thing to that in terms of naval design.

Because of reduced out-of-water drag, the Tetra would have been ideal for long-distance traveling: the designer imagined it with an estimated range of 3,000 nautical miles, and many of those would be covered very quickly at that speed. The elevated hydrofoil propulsion would have improved efficiency considerably, making this superyacht a leader in its class.

This sounds like a whole lot of science fiction, but the reason Tetra got so many people excited was that the idea behind it was grounded in actual fact (Star Wars references don’t count as actual facts, sorry). The HYSWAS hull was based on an existing hull design that had been developed by several companies: the Maritime Applied Physics Corporation in America, for instance, had designed the technology demonstrator The Quest way back in 1995.

Despite a rather small size, given the pyramid structure of the Tetra, it still had plenty of space, so all luxury amenities you usually expect on a superyacht would have been accounted for. Schwinge imagined it with accommodation room for ten people, six guests and four crew. He never said how many cabins it would have, but renderings showed it would come with living quarters above sundecks that would surround the pyramid. These sundecks would get instant water access by opening up, by means of ladders.

It would also come with outdoor dining area and a tender garage for all the water toys six people could want. Given the size, there wasn’t a pool and perhaps not even a gym but, seriously now, when you’re traveling at such speeds on a superyacht that looks like a Star Destroyer, does that even matter?

Oceanco NXT – the future is zero, zero impact on the environment

Oceanco unveils its vision for future demands by reflecting across industries, with the ultimate goal of zero impact on the environment.
Read more
Superyachts

She also features a full-beam "private beach" and an an expansive bow terrace. Having already mastered the multihull, Sunreef Yachts is...
Read more
Superyachts

UP40 - Explorer is the second of three concepts developed by Antonini Navi based on the modular steel platform that allows the...
Read more
- Advertisment -