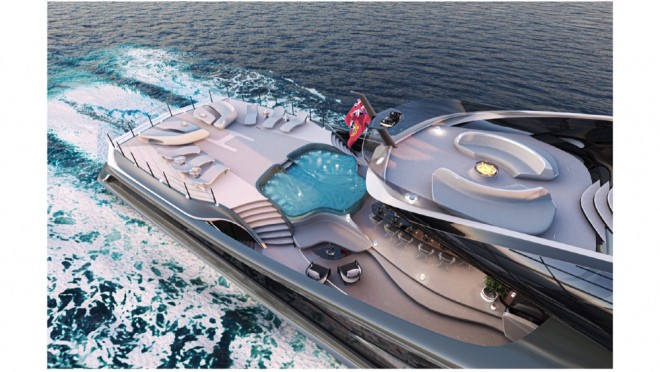 Futura has hybrid engines, a glass exterior and a fish-like shape, along with dozens of other technologies that foster sustainability.

Vripack’s 217-ft. Futura concept is a fossil-free hybrid with a glass superstructure, an electricity-generating kite and a big sense of whimsy.

Amsterdam-based Vripak believes that progress requires the occasional moon shot, a project that pushes boundaries and synthesizes existing technologies in a way that recreates expectations. The design studio has always operated under the theory that few will seek something that doesn’t seem possible.

Futura aims to show the world that a full-featured superyacht can combine elegance and sustainability. “By approaching sustainability as a design challenge, we’re not waiting for owners to request this technology, we’re presenting them with a concept based on sustainable solutions that currently exist,” Bart Bouwhuis, Vripack’s co-creative director. “Owners just need to want it.”

Futura is about a third the height of most superyachts in her class which, along with a glass topsides, makes her lighter and easier to be propelled by hybrid engines. Vripack

That “wanting” starts with a curvaceous, eye-catching exterior meant to “mimic nature,” in co-creative director Marnix Hoekstra’s words. Slender and elegant overall, Futura stands about one-third as tall as other yachts in its 220-ft. size range. A narrow bow that widens amidships is reminiscent, when seen from above, of a whale’s body, and the glass superstructure has rhombus-shaped ribs that recreate the shape and stability of a cocoon. The glass also saves considerable weight while giving the upper decks a unique, see-through quality.

The designers worked with natural shapes to create a more ergonomic superstructure, along with a more efficient running surface. Vripack Design

“You can see everything on the boat,” says Bouwhuis. “In practice, this means that everybody on Futura can be doing their own thing, but you’ve still got this consciousness of where your family and friends are.”

Inside, a unique split-level arrangement starts with a lounge area that opens off a swim platform. The lounge leads to a “beach house” and the six guest suites. The lounge also provides access to the main deck, where an alfresco dining area connects to a pool and a sun deck (it also functions as a helipad.) On another level up, a full DJ booth overlooks the pool and deck, so guests can party like pros.

The fossil-free features start with hybrid diesel-electric engines that use plant-based diesel, which reduces CO2 emissions by 90 percent and SOx and NOx by 30 percent. A gasifier optimizes the fuel mix to minimize unburned diesel in the exhaust, while a catalyzer neutralizes whatever does not combust.

A kite that releases at the push of a button cranks a generator that sends electricity to the all-organic water-salt-and-sand based batteries. This “bio” set-up offers capacity equivalent to lithium-ion, with infinite recharges, but it can’t replicate the high-intensity discharge of the more common chemical cells.

Hoekstra and Bouwhuis are quick to point out that despite the name, Futura is not about some science-fiction future. Instead, she’s designed on technologies and systems that are in use already.

“We made a decision, to go more with the cutting edge than the leading edge to show what was possible,” says Hoekstra.

Tankoa Yachts announces the sale of the new first T580

This is the first 58-metre model, a fantastic addition to the fleet of the Italian shipyard. The hull will be built in...
Read more
Superyachts

A sleek, muscular new predator has taken to the seas with the launch of a 36m custom support vessel by Alia Yachts....
Read more
Superyachts

This is the second yacht sold in Spring 2021 by the Dutch shipyard. Project Gemini’s construction was started as a speculative venture,...
Read more
Superyachts

Lürssen is proud to announce the successful launching of project 13800 on April 29, 2021. Her delivery is planned for summer 2021...
Read more
Superyachts

Sanlorenzo Yachts: delivers the first unit of the 62Steel

Heesen is delighted to announce the delivery of Moskito, YN 19255, previously known as Project Pollux. At 55 metres with a Gross...
Read more
- Advertisment -

Following in the wake of the award-winning first unit in the Otam Aluminum Custom Range 35m Gipsy designed by Tommaso Spadolini, the Ligurian...
Read more

Self-assured and defiant, with a slew of new features and an incredible 48 knots of power: Pershing 6X expresses the boldest and...
Read more

With six months to go to the start of the 42nd Rolex Middle Sea Race on Saturday 23 October, the Mediterranean’s premier...
Read more

The next level in wireless, wearable man-overboard technology

This is surely among the most intelligent marine applications of wireless technology yet seen? Two overboard location alert systems (OLAS) from Exposure Lights...
Read more

YYachts in Greifswald will hand over four yachts to their owners this spring. The start was recently made with "Vegas Baby". This...
Read more

“M35' WRC is a Moana Bluewater Yachts born to sail without limits in the most modern and efficient way and to race...
Read more
Load more