U.F.O. Is the Self-Sufficient Luxury Houseboat You Will Never Want to Leave 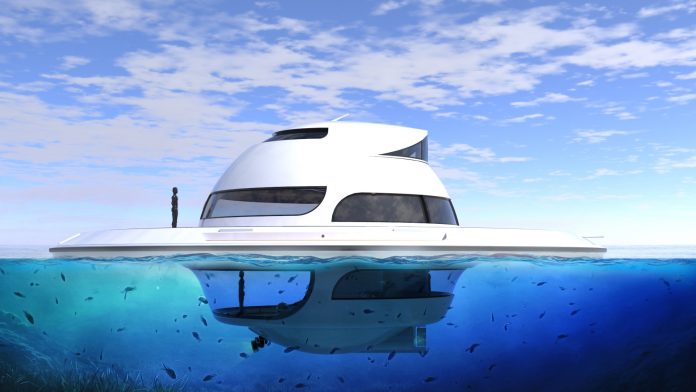 Isolation never looked this good, fun or luxurious. Meet the luxury houseboat U.F.O., which stands for Unidentified Floating Object and is occasionally referred to as a “yacht,” a total misnomer.

U.F.O. has seen several iterations over the past decade, which is how long designer Pierpalo Lazzarini from Lazzarini Design has been working on the project. The most recent – and noteworthy – ones are the 2016 U.F.O. 2.0 and last year’s U.F.O. 1.2.

Lazzarini is fascinated with alien flying ships, which you may have guessed from the name of this particular watercraft and its overall shape. Another one of his popular projects is also inspired by an UFO, of the flying type, the Jet Capsule we featured in another coverstory.

This particular watercraft is bigger, fancier, more luxurious and better fitted for life at sea. It is basically a 3-level structure that comes with batteries and optional solar panels and wind turbines, which would make it endlessly autonomous. Storage space, living quarters and the ability to move across short distances would make this the perfect residence in an apocalypse-like scenario. Or, you know, for the ultimate billionaire introvert.

The 2.0 version of the houseboat had a 20-meter (65.6-foot) diameter, was bigger and more comfortable. The upper level consisted of the captain’s station and a pool / jacuzzi, with the retractable roof allowing bathers to top their tan in between spa sessions. Underneath it was the main living area with a kitchen area, with ample cooking and dining spaces, and a small bathroom.

The disk that kept the entire structure afloat hid the batteries and weights, the latter of which would allow for the third level to remain submerged. The third level, with surrounding views of the seabed, was the sleeping quarters: a king-size bed with a very spacious bathroom, with no sacrifice to personal comfort. All interior options could be customized according to the future owner’s preference.

“The possibilities of usage and layouts are unlimited for this proposed model,” Lazzarini said at the time. “The U.F.O. 2.0 can be used for a number of purposes including hotel reception, gym or a floating restaurant. Furthermore, the external deck can be customized into garden platforms and teak can be installed instead of panels.”

The floating disk could also be used as a sundeck, an actual garden or a bike path, albeit not a very challenging or interesting one. Propulsion would be possible thanks to a pair of 80 hp electric engines, which would take the entire floating house to a top speed of about 9 knots.

In the spring of 2019, Lazzarini Design announced the upgraded Unidentified Floating Object: a smaller but still luxurious, more practical version called 1.2. This one was only 12.5 meters (41 feet) in diameter and had only two levels, with the possibility of attaching a jacuzzi on top of the structure.

The idea remained the same, though: one half of the houseboat would be above water and the other half submerged, with the possibility of moving for short stretches at low speeds included. The upgraded model will move even slower, at 3.5 knots. This is clearly not a lot, but it’s enough for transfer distances.

Like with the predecessor, the upper habitable area would be living room with a small kitchen and the captain’s station, while the bottom one would consist of the living quarters and a bathrooms. The massive window on the submerged room is now fitted with a similarly-sized wiper that ensures the views of the seabed are never obstructed.

The 1.2 version of the U.F.O. would use a four-point anchoring system and be truly self-sufficient. In fact, Lazzarini imagined it could even be used as a charging station for other vehicles, in addition to having complete autonomy. Solar panels, a desalination system, other means of alternative energy and plenty of storage space could be used to help guests stay at sea for as long as they want.

When the upgraded concept was unveiled to the public, Lazzarini reiterated older plans of turning to crowdfunding to get the first running U.F.O. on water. He imagined it could be build by 2021, with pledgers being offered day-long stays on the floating saucer for their contribution, once completed. Then, ‘rona happened.

Stash this idea for later, though, because it’s a promising one.

What we’re witnessing is known as the Sunbeam ConceptONE, created by two designers, Maximilian Troicher and Anja Didrichsons. To make...
Read more
Design