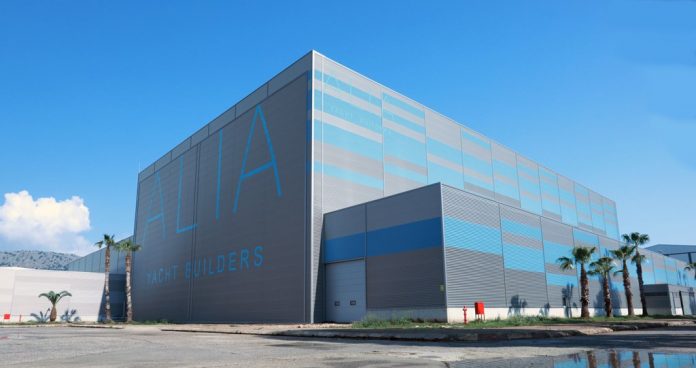 “The new facility has also allowed us to consolidate and streamline a lot of processes that were spread out before,” says Gökhan Çelik, founder and President of Alia Yachts. “ This means we’ve been able to cut time and costs while increasing capacity and efficiency, which are al l advantages that can be passed on to our clients.” As with shipyards throughout Europe, Alia Yachts has experienced some slow down in production due to the coronavirus pandemic, but the lockdown in Turkey was much less severe than in other countries and most manufacturing industries closed only at the weekends.

“Naturally, we have social distancing protocols in place and we’re being vigilant to protect the health of our workers,” says Çelik. “ The main difficulties resulted from a ban on intercity travel, which made it difficult for subcontractors to move around, and there were some interruptions in the supply chain. But most of our processes are done in house , so we experienced only minor delays and we’re now making up for lost time.”

Alia Yachts has a busy summer approaching after the recent turning of the hull of its 36 metre shadow vessel slated for delivery in 2021. Once complete it will support Project Phi, the mothership currently in build at Royal Huisman in the Netherlands.

In June, the shipyard will join the hull and superstructure of Al Waab II , a 55 metre steel and aluminium motoryacht with interior, exterior and naval architecture by Dutch design studio Vripack.

“This is a hugely exciting project, but also a challenging one as we’re working to a tight build schedule of just 24 months,” says Çelik. “ Despite interruptions caused by coronavirus, however, construction is on track and we should wrap up the hotworks in another couple of weeks.”

Also this summer, the shipyard is due to join the hull and superstructure of Nozomi II, a 32.40 metre sistership to 30.5 metre Virgen del Mar VI (formerly Project Nozomi), being built up spec

“I can also reveal that we are in the final phase of negotiations for more than one 40 metre plus project and we hope to be able to release more information shortly concludes Çelik.