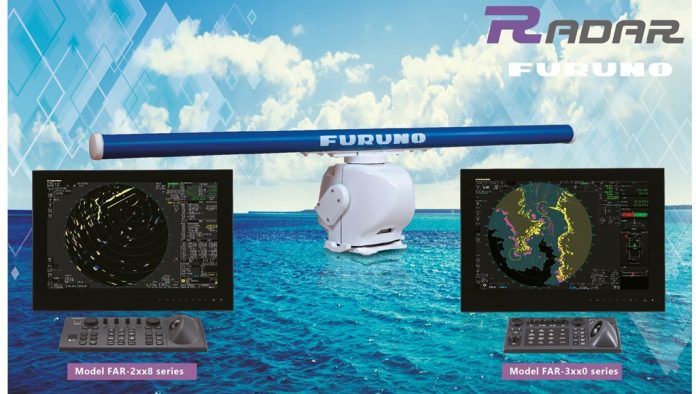 X-Band Radar generally provides better target resolution, while S-Band Radar, operating at a lower frequency, is less affected by rain and fog, and can detect targets at greater distances.
Furuno NXT Solid-State Radars rely on electronic components rather than magnetrons to generate their microwave pulse, requiring less power than traditional Radars. There is no pre-heating of a magnetron needed, so the startup time of Solid-State Radar is much faster. Because there are no consumable components, maintenance costs of NXT Solid-State Radars are drastically reduced.

The advanced Nxt Radars
The advanced NXT Radars also feature Furuno’s updated antenna and gearbox that provides high signal accuracy and excellent reliability. Their design produces less drag, reducing the burden on the gearbox and allowing the NXT Radar to operate for prolonged periods.
These new NXT Radar gearboxes share the mounting footprint of multiple prior generations, so retrofitting from old to new is easy and inexpensive. Due to Furuno’s innovative system architecture, the Radar signal is processed from analog to digital directly within the gearbox, providing a clean, noise-free transmission and enhancing the clarity of the Radar presentation. Clear echo images and lower noise produce a better view around the vessel, and the NXT Radar will generate echoes even from weak targets, such as very small craft observed at a distance.

Simple and intuitive user interface
These NXT Radars also deliver a simple and intuitive user interface, including an InstantAccess bar with menu shortcuts for frequently used functions. The Radar’s familiar physical controls are ergonomically and logically designed, and the new interface allows for all operations to be accessed and controlled from the trackball.
As a leader in marine electronics, Furuno is committed to providing efficient and reliable tools to ensure your safety at sea: the NXT Radars are an example.

Mercury Marine is proud to make boating easier and more enjoyable for all new Mercury customers of outboard engines of 175HP and...
Read more
Technology

TEAM Italia is celebrating 20 years of activity with over 500 completed projects for mega and superyachts (30-100 metre range). These projects...
Read more
Technology