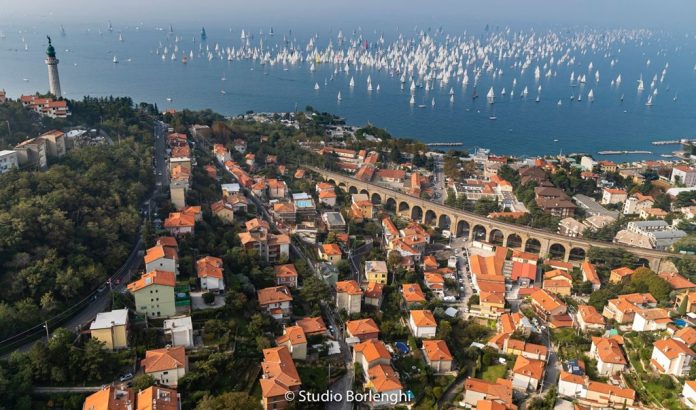 Trieste, July 21st 2020 – Starting today, July 21st, registration is open for the 52nd edition of the Barcolana presented by Generali, which will take place on October 11th in Trieste (Italy), which will be preceded by- starting on October 3rd – events planned at sea and on land.

“We have worked very hard” – said the president of SVBG, Mitja Gialuz – “to get to today, the day when the registrations for the Barcolana are opened. This is a symbol of the great passion for sailing which we share, in a time when so many other sporting events have been canceled. The title of this year’s Barcolana, “Together”, represents everything we are: we are people of the sea who want to come together to race, respecting the environment and following all the safety guidelines, maintaining a positive outlook, with the ability to adapt and the will to win over the fear and uncertainties that have characterized the last months in Italy and around the world. Barcolana 2020 will be different, but not understated: there will be enthusiasm, plenty of events, commitment, fun, all the elements that have always characterized it” said President Gialuz.

Enrollments – Having confirmed categories, route, date, time, and registration fee, the Barcolana regatta will take place in the Gulf of Trieste on October 11th, starting at 10.30am, and will announce important news regarding the procedures for registering, dictated by the need to avoid gatherings and to comply with safety regulations.

Starting today, Barcolana 2020 enrollment will be online, at the website www.barcolana.it; When completed, you will be sent the bag, gadgets and all materials – including their bow number – in order to participate. The SVBG’s organization has had to make significant changes to enhance their online platform: the entire enrollment process, and more generally

The Barcolana website and e-commerce have been upgraded and made better from the point of view of the user experience by Barcolana’s digital partner, IKON. In addition to this “digital evolution”, a call center, built in partnership with IS COPY, will be available to help those who are not familiar with the online enrollment process.

“Mandatory” Mooring – To avoid the clustering of boats along the Rive, the organizers of the 2020 edition will require the owners to have – and indicate at the time of completion of their registration – a mooring booked for the period in which they will be in Trieste to participate in the event. To facilitate the arrival of crews from afar, more than 400 free moorings will be set aside by the organization.

E-Commerce and experience – Barcolana will continue with its marketing ventures, and will do so not only with the pop-up shop during Barcolana, but also with the enhancement of its e-commerce site: from today it will offer – in addition to the merchandise and the regatta poster designed by Lorenzo Mattotti made with Illy which was presented three weeks ago – also a new section dedicated to tourist “Experiences”. “Launching a tourism project, the Experience, at this time” – commented Gialuz – “is an important signal for our entire territory. We have prepared, in accordance with the guidelines, tourist packages to experience the Barcolana, but also to take advantage of the days of the regatta to visit Friuli Venezia Giulia”.

The official Polo – The official polo shirt of the event, which Barcolana entrusted to North Sails for the second year, will be royal blue. The partnership continues after the success of the 2019 edition: the official clothing will be available in stores during the event, in North Sails stores and online.

The events calendar  – The calendar, featuring some new events and confirming most of the traditional events at sea, will be published in the second half of August. All the traditional regattas connected to Barcolana have already been confirmed, new activities will be announced by the Barcolana Academy, which will organize numerous advanced sailing courses to prepare fans for the regatta. The briefing for participants on Saturday October 10th will be held online, and much will be added in the coming weeks, especially with regard to ground events.

Enviromental Commitment – Environmental commitment is clearly part of Barcolana’s DNA. Barcolana will be the first regatta in the world to include in its enrollment form the indication of the role of R.eco, or ecological manager, who will have the task of ensuring, on the part of its crew, a sustainable participation in the regatta from an environmental point of view.