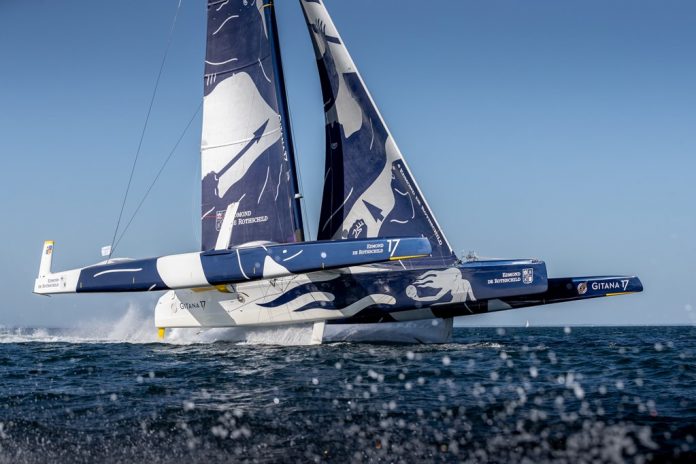 La Trinité-sur-mer, Tuesday, July 21, 2020 – What a pleasure to rekindle the ties with the intensity of competition! The beaming smiles of the six sailors aboard the Maxi Edmond de Rothschild said it all this Tuesday lunch time after crossing the finish line of the Drheam Cup 2020 offshore of La Trinité-sur-Mer in south-west Brittany. And to add to the magic of the moment, it was in full flight making over 35 knots that the 32-metre giant rounded off the 750-mile course that began at noon on Sunday in Cherbourg. What a show!

The Cammas-Caudrelier duo and their men took victory after 1 day 21 hours 30 minutes and 33 seconds, two hours ahead of 2nd placed Sodebo, Actual completing the podium. It was a hotly contested and thrilling match between these three crews thanks to some very varied conditions, ranging from 1 to 22 knots of breeze! With a firm hold on the head of the fleet from the start despite the light winds, the sailors of Gitana Team hung onto the top spot throughout the 750-mile course. Last night, they made the most of a long and particularly dynamic reach to definitively open up their lead to take line honours shortly after 10:30 hours local time this Tuesday 21 July

Masterful sailing from beginning to end

“Right at the start, we pulled off a small tactical move inshore, which enabled us to steal a bit of a march on our rivals even before we attacked the cross-Channel passage. Up next, the weather didn’t necessarily favour the lead boat, which meant that our pursuers were able to catch us right up again, but this little cushion of a lead we’d gained at the start, small though it was, was important as it meant we always had a slight jump on them throughout the race! That slight edge also prompted our rivals to make errors by taking greater risks to close on us, especially as we negotiated a ridge of high pressure and again last night”, explained Franck Cammas.

Initially, the Ultimes were due to round the Isle of Man in the Irish Sea as part of a 1,100-mile course. Twenty-four hours before the start and taking into account the latest grib files, Race Management, in agreement with the organiser, opted to shorten the course to prevent the fleet from being ensnared for days in the calm conditions associated with the high pressure. The passage of a waypoint in the Irish Sea yesterday served as a good indicator of what would have awaited the crews in this race without this modification: “It was a very wise decision to shorten the course and bring it in line with the weather conditions at the time. The aim was to sail and not remain pinned to the racetrack for hours in windless zones and hence with no match racing,” explained Cyril Dardashti, director of the Gitana Team. Franck Cammas shares this sentiment, admitting on his arrival dockside today how much he’d enjoyed the past two days of racing: “It was a very fine race and it was intense, which is just the way we like it. There were some tactical phases, other periods which were just a drag race and a lot of reaching at the end, as was the case during the second night when we were hunting down the cardinal mark off Rochebonne, which was great because we didn’t have conditions as quick as that in last year’s Fastnet. It was quite good being able to push the boat in these conditions. It’s never easy to permanently remain close to 40 knots, like we did last night. It was a great finish. We learnt a great deal from this race. It was a technical course in a small space, because the English Channel and the Irish Sea aren’t very big at the end of the day given the size of our boats. That means we can run through all the different manoeuvres you can do on an Ultime.”

A shakedown for the crew prior to the Jules Verne

The only race on the cards for the 2020 season before their Jules Verne Trophy record attempt, the Drheam Cup was a must and the perfect opportunity for the men of the Maxi Edmond de Rothschild to see where they’re at both competitively and technically, as Charles Caudrelier explains: “It was important to be here as you can count the number of opportunities to go racing on the fingers of one hand! This is especially true in conditions like those we encountered last night, which enable us to drive the boat at her full potential. We’re delighted with the modifications we made to the Maxi over the course of the winter. From the outside, the boat looks the same, because aside from the fairly obvious aerodynamic additions, like on the beams, you really need sharp eyes. However, the team has done a really good refit and today we are able to see the fruits of our labour. I believe we have further optimised the platform and the level of performance we’ve achieved since her relaunch has made it all worthwhile. The race format didn’t necessarily lend itself to actually training for the Jules Verne, but it gave us a chance to head offshore again and rediscover the mechanics of sailing the boat… The Drheam Cup has launched our Jules Verne Trophy record campaign!”

Following on from the Fastnet, in August 2019, and the Brest Atlantiques last December, Franck Cammas and Charles Caudrelier have secured another win in the Drheam Cup. That brings to three the number of victories out of the four races contested since their arrival in the Gitana Team, figures which testify to the great alchemy that reigns between the skipper pairing and the latest addition to the Gitana fleet. Three years on from her launch, the five-arrow maxi-trimaran, the first vessel of her kind designed to fly in the open ocean, has unquestionably entered the maturity stage, but according to her skippers, she still has some surprises in store and has even more power under her bonnet: “We beat the boat’s speed figures last night, posting over 46 knots. However, what’s most impressive of all are the average speeds in excess of 40 knots as we’re now able to keep up this pace for long periods. It’s not over yet!” concluded Charles Caudrelier, grinning from ear to ear.