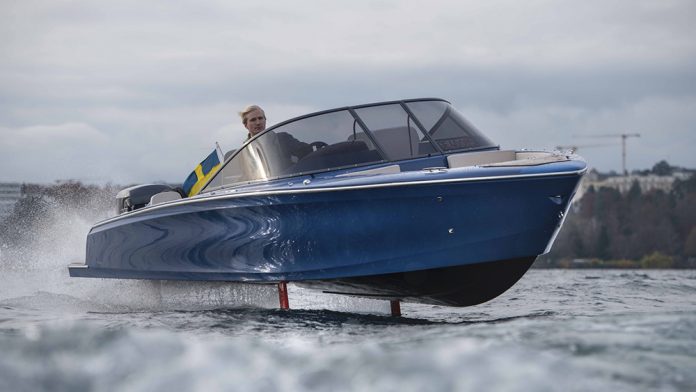 The whisper-quiet speedster can climb to 30 knots.

Who better to put the world’s first and only electric hydrofoil powerboat through its paces than a marine-world legend? So concluded Erik Stark, six-time Powerboat World Champion, who recently tested out Candela’s groundbreaking new vessel in the waters of Sweden.

The joyride, which was captured in Stark’s new Team Subtech video, was prefaced by a tour of the Candela factory in Stockholm. Here, Candela’s founder and CEO, Gustav Hasselskog, gave Stark the skinny on the state-of-the-art electric speedster.

Indeed, the vessel is fitted with a 40kWh battery pack and 55kW motor, which affords a range of up to 50 nautical miles when sailing at 22 knots. Full tilt, she can hit 30 knots. It’s not exactly the 130 knots that Stark is used to hitting, but impressive nonetheless.

On top of that, the hydrofoils ensure a much smoother ride since you’re lifted above rougher waters. Candela has also developed an automated landing sequence for seamless touchdowns. Basically, when you pull back on the throttle, multiple hydrofoils automatically flare out like little wings to give a smooth re-entry to the surface of the water.

The vessel spans 25 feet and can fit up to six seafarers. There’s even generous forward seating that looks ripe for sundowners. Best of all, since she’s fully electric, the vessel is whisper quiet and can be recharged at your dock overnight. She’s also 95 percent cheaper to run than standard boats and reduces local emissions by 99 percent.

Hydrofoiling isn’t exactly a new concept—in fact, the technology dates back to the 1900s—nor is it underrepresented. Recently, we’ve seen everything from shape-shifting boats to lifted catamarans. Still, Candela’s is the first fully electric model to hit the water, and she’s already garnered a loyal following. The company has almost sold out for 2020 and the 2021 waiting list is filling up fast. So far, Candela has delivered 16 boats across Europe and the US, all of which were built in Sweden. Best order yours posthaste, gents.

Canadian engine manufacturer Vision Marine makes some of the most powerful electric outboard engines in the world and now wants to use...
Read more
Boating

Cranchi Yachts choses a digital format for the presentation event for its latest model: the A46 Luxury Tender, a Yacht that for...
Read more
Boating

The new Dolceriva with hard top has a timeless beauty in every sense, because it will never lose its shine over the...
Read more
Boating

Combining comfort, efficiency and respect for the environment, with a keen eye for the details that make a boat instantly recognizable: this...
Read more
Boating

chaefer Yachts is the largest Brazilian shipyard, with more than 30 years experience in excess of 3,500 units manufactured and delivered around...
Read more
- Advertisment -