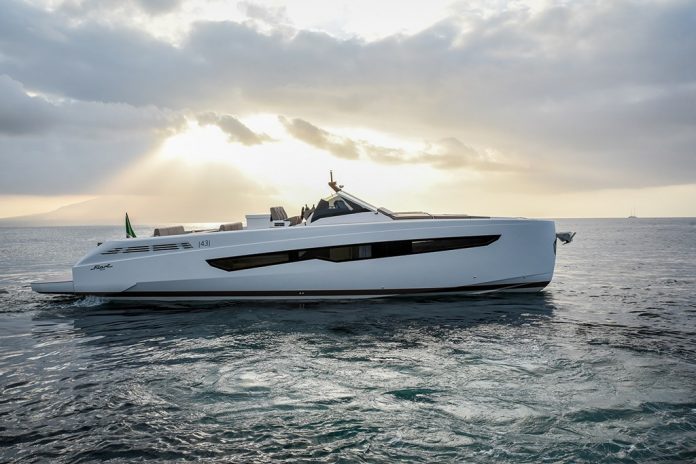 The Fiart 43 Seawalker touched the water for the first time on August 22 at Baia, Naples. The launch took place at Fiart Mare’s historic headquarters where thousands of boats have been built and launched over the yard’s six decades in business.

The event was attended not just by Fiart Mare’s managers and technicians but all of the artisans whose skills and experience combined to create a yacht of superb technical and aesthetic quality.

With the 43 Seawalker, Fiart Mare is relaunching the highly successful Mediterranean yacht concept first introduced in the Fiart 33 Seawalker, a model as ideally suited to day-to-day navigation as fast cruising. Stretching 13.84 in length and 3.99 in the beam, the 43 Seawalker has a walkaround deck with a modular layout. Its interiors offer two separate cabins: one forward with a double berth and one aft with side-by-side single-berths, both served by a large bathroom with separate shower box.

The intermediary between Fiart Mare and the French owner was the OMV Yachting Group, an organisation with offices in Port Grimaud and Saint-Tropez on the French Riviera. OMV played an important role in creating a seamless balance between the yard’s personalisation capabilities and the client’s requirements. The latter, in fact, chose a cockpit with a layout that includes a large sun pad, a small settee and two movable tables to boost the versatility of the spaces. The optionals selected for the first Fiart 43 Seawalker include a large electro-hydraulic lifting stern platform which submerges to not only make it easier for guests to enter the sea but also facilitates launching and retrieving the tender.

1960: Fiart Mare rides the wave of technological progress, becoming the first European yard to build a boat from fibreglass, then an absolutely leading-edge material. This move marked a huge leap forward for the boat industry. The craft in question was a small 3.6m open called Concita.

2020: 60 years later, Fiart has produced over 150 extremely popular models entirely designed and built in its own facilities in Italy. Said craft have sold in thousands all over the world. The yard continues to build on its technological leadership by turning out stunning motoryachts considered among the world’s finest. Today, in fact, Fiart Mare Group offers a range of models from 33’ to 60’ with the brand Fiart and  over the 60’ with the brand Cetera – designed for all-around sea lovers who demand quality in every single detail aboard. These are boats for owners who demand fun at the helm but are also looking for safety and reliability. People who truly appreciate the boat/home concept that only Fiart manages to deliver on despite its models sportiness: craft with unexpectedly large volumes and ingeniously utilised surface areas. To which the yard also brings a standard of personalisation that guarantees each owner not just a boat but a Fiart of their own.