Home Events Regatta ETF26 - Billy Besson, once again on the highest step of the...
EventsRegatta

ETF26 – Billy Besson, once again on the highest step of the podium 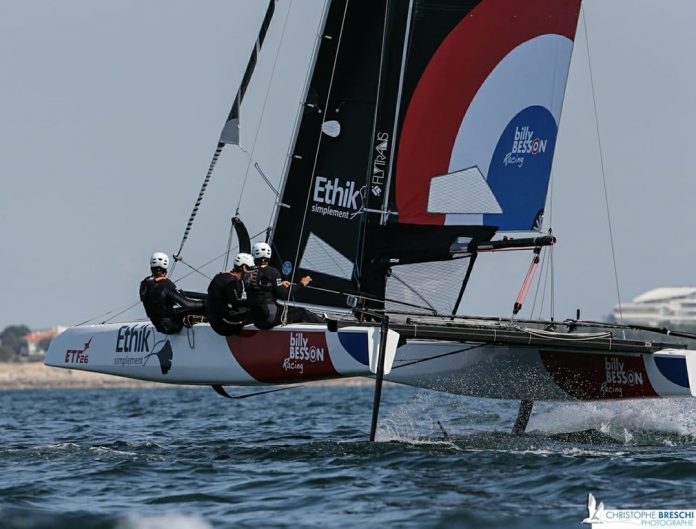 Hardly out of the Warm Up of Carnac, the crews found themselves on the beautiful rochelais race course to compete in the National organized by the Société des Régates Rochelaises. One again, a very high level with a line-up of about twenty wolrd championship titles all regatta sailors included!

The teams have been racing for 3 days between raids and stadium in delicate wind conditions, especially on the last day, which required a lot of concentration and tactical finesse.

The Billy Besson Racing by Ethik won almost all the heats, the Youth Foiling Team made a big comeback in the ranking and the Team Pro and Ville de Nice – ABC Arbitrage had a very close fight because only 2 points separated them at the end of the weekend. Jean Christophe Mourniac, winner of the ETF Series 2019 confides “the level has gone up, we have to fight!”.

Billy Besson : “The regatta went really well, we worked really well. It’s exactly the same courses that we do in SailGP, and it’s easy to gain a bit of experience. Even if the boats are not the same, there are a lot of similarities, that’s what makes it possible to work well. It’s important for us to stay in the game”.

Arnaud Dorange (ETF26 Class President) : “The ETF26 is a fast boat, very fun, which attracts international and sharp crews like those of SailGP (ndrl : Billy Besson and the Danish Nicolai Sehested), experienced owners or even ocean racing sailors like Jean Pierre Dick. The National in La Rochelle was a very nice regatta. Congratulations to the winner Billy Besson”.

Rendez-vous for the 3rd act of the ETF 2020 Series in La Trinité sur Mer, the Spi Ouest France, the flagship regatta of the season, on September 25-26-27!

We will also see the Danish SailGP crew absent in La Rochelle due to a calendar incompatibility. Unfortunately, the 2 English crews will be absent again because of Covid-19.

After being introduced as a concept at the ORC Annual Meeting in November 2016, it’s been over 4 years of effort to...
Read more
Regatta

With six months to go to the start of the 42nd Rolex Middle Sea Race on Saturday 23 October, the Mediterranean’s premier...
Read more
Regatta

A little less than two days before the official start of the Spring Regattas - Splendido Mare Cup which will begin on...
Read more
Regatta

The 25th anniversary of the Superyacht Cup Palma is shaping up to be a landmark celebration of Europe’s longest running superyacht regatta.
Read more
Regatta

2022 European Championships will be held in Aarhus, Denmark