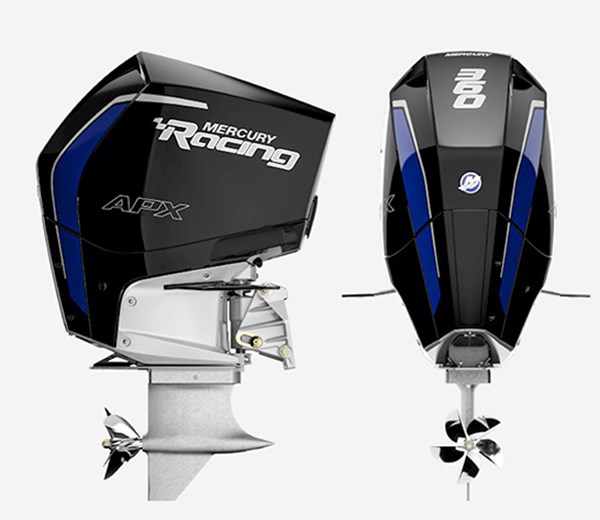 FOND DU LAC, Wis. (September 15, 2020) – The new Mercury Racing 360 APX competition outboard is a powerful four-stroke V8 designed specifically to power Formula One tunnel boats on the UIM F1H2O World Championship. The 360 APX outboard is the first model in a new Mercury Racing Apex Series of outboards designed for closed-course competition, and will be available in late summer of 2020 to qualified racing teams.

“The 360 APX will drive a new era of performance for this premier class of tunnel boat racing,” said Stuart Halley, Mercury Racing general manager. “It combines a durable, low-emissions, four-stroke powerhead with amazing performance, and will require much less maintenance than the two-stroke outboard currently in use in the F1H2O World Championship.”

The UIM F1H2O World Championship is the flagship international series of single-seater inshore circuit powerboat racing. The series attracts the world’s leading F1 Teams competing in tunnel-hull catamarans that hairpin turns at more than 145 km/h and top 225km/h on the straights.

“I am excited about the arrival of a new low-emissions competition outboard engine from Mercury Racing, focused at the top level of powerboat racing,” said UIM President Dr. Raffaele Chiulli. “The engine, designed with input from the UIM and H2O Racing, significantly reduces exhaust emissions while at the same time providing the speed and excitement that powerboat racing fans expect from our flagship series in circuit racing.

The 360 APX derives from the Mercury Racing 300R, the induction system, midsection and calibration are new as well as the new overdrive spur-gear set to enable 9600RPM at the prop-shaft, a digital control offers smooth and precise throttle application. The 360 APX uses an evolved version of the Mercury Racing Super Speed Master (IV SSM) outboard gearcase. The overdrive spur gear system is designed to accommodate multiple gear ratios, so the teams can select the ratio that best fits each particular race. The top cowl and driveshaft housing covers are lightweight carbon-fiber composite with a robust quick release latching and sealing system ease access to the midsection.

TEAM Italia is celebrating 20 years of activity with over 500 completed projects for mega and superyachts (30-100 metre range). These projects...
Read more
Technology

A handy tool in your smartphone BUC: The new Besenzoni app

A handy tool in your smartphone BUC, the Besenzoni app for smartphones and tablets – originally designed for gangway control – expands...
Read more
- Advertisment -