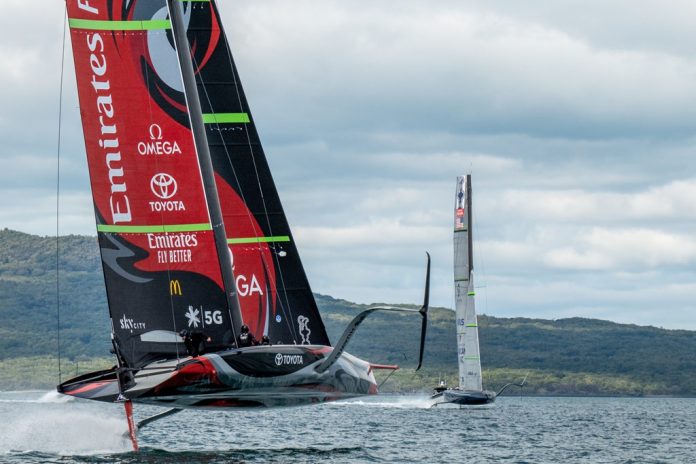 First competed in 1851, it predates the car by 35 years, the inaugural flight of the Wright Brothers by 52 years, and the modern Olympic Games by 45 years.  Whilst newspapers were in print when the first America’s Cup was won, that first race around the Isle of Wight took place 69 years before the invention of broadcast radio, 74 years before broadcast TV was demonstrated, and 154 years before the launch of YouTube.

Fans of the America’s Cup all around the world will be able to enjoy coverage via all forms of media on every screen in 2020 and 2021. The primary objective of the live broadcast of the 36th America’s Cup is to make this the most viewed and accessible America’s Cup competition.

Set against the picturesque background of the Hauraki Gulf of Auckland, New Zealand, with a new title sponsor, Prada, and in a dramatic new class of racing yacht, the AC75, the world’s best sailors will race to win the oldest trophy in international sport.

“Since we won the America’s Cup in Bermuda in 2017, we have always stated that our objective was to make this America’s Cup the most inclusive and accessible America’s Cup in its 170 year history. And a big part of this is making the broadcast of the events as widely available as possible via national free-to-air networks, supplemented by major pay channels, and onour website and digital platforms,” said Grant Dalton, CEO of the Defender, Emirates Team New Zealand.

Patrizio Bertelli, CEO of COR 36 (Challenger of Record), added: “Since the very beginning of this edition we have prioritised the quality of broadcast production and the wide distribution – with the broadcast of the America’s Cup to the largest possible audience – over an economic return. We are therefore very pleased that so many national “free-to-air” channels and major pay networks will show all the events of the Prada America’s Cup World Series Auckland, the Prada Christmas Race, the Prada Cup, and the 36th America’s Cup. We are confident that our commitment will receive in return a record audience.”

Racing in the spectacular AC75s in Auckland, New Zealand will begin on 17-20 December 2020 with the Prada America’s Cup World Series Auckland and the Prada Christmas Race. The Prada Cup, the Challenger Selection Series, begins on 15 January 2021. The winner of the Prada Cup will meet the Defender, Emirates Team New Zealand, in the 36th America’s Cup Match starting on 6th March 2021.