Osseo, the Performance Sailing Yacht Perfect for a Millionaire Pirate 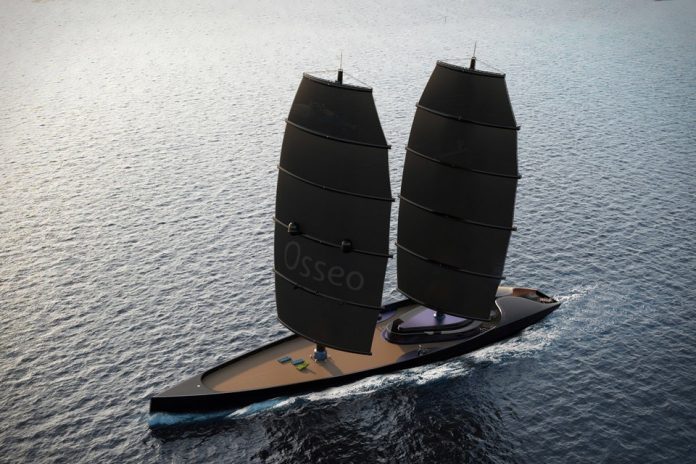 The brainchild of Serbian designer Igor Jankovic, Osseo is an incredibly beautiful and elegant yacht that is simultaneously modern and old-school, for the very romantic fact that it partly relies on wind power for propulsion, too. Introduced in 2019, it remains to this day one of those concepts one can’t but wish were brought to life, by simply looking at it.

Osseo is designed for hosting events, with the capacity to accommodate 12 guests in utmost luxury. There is nothing flashy about this superyacht, contrary to what that term would make you assume. In fact, it’s almost spartan in how it minimalist it looks from the outside.

Osseo, like its real-life precursor Black Pearl, the world’s largest sailboat, is black. That in itself is bound to make any vessel stand out in a sea of white builds, but Osseo is not just about a unique color theme. With a hull of carbon fiber and graphene, which gives it resistance to corrosion, a light weight and a blue-purple tinge, it is fully rigged with black masts and sails.

Of course, it would use a DynaRig system, which is at least two times more efficient than traditional sails and involves freestanding, rotating masts and sails that deploy instantly, with just one person at the controls. Also known as a Falcon Rig, a DynaRig system has sails that, when deployed, leave no gap between them, which makes them act as a single airfoil for maximum efficiency. The Black Pearl, for instance, was able to reach speeds of 30 knots on sails alone during sea trials.

Jankovic doesn’t go into the details of the propulsion system of Osseo, saying only that it would also have diesel electric propulsion.

“Osseo is a luxury performance yacht with exceptional sailing performance and uncompromised luxury and accommodations,” he writes on his official website. “The 72m [236-foot] Osseo is a fully rigged using innovative DynaRig system and many other technological features.”

Since this is a “performance” yacht, one could very well assume it would be capable, in theory, of a performance similar to Black Pearl. This beauty looks as if it was made to fly.

Osseo also stands out for its elegant design. Spaces on board are used to create generous relaxing areas, including an indoor and outdoor dining area, beach club and plush lounges. The contrast between the dark exterior and the delicate, earthly tones of the interior is on purpose, helping to create an oasis of relaxation in the middle of the ocean.

The beach club is uniquely designed, too. It’s partly covered by a semi-transparent roof and tinted class, which makes it ideal for day-long use: sunbathing and dips in the sea during the day, and sheltered entertainment area during nighttime, with ambient lights and the possibility for al fresco dining. A small dip pool is included, for guests who don’t feel like getting saltwater on their designer swimsuits.

And that’s just about every detail available on a concept that stands out for its design, theoretical efficiency and solid execution. Just enough to leave you wanting more, or at least wishing some pirate-type with many millions in the bank would come along to make this a real thing.

Custom-tailored for family cruises across the Seven Seas, the Sunreef 80 Nomad was recently handed over to her owner.
Read more
Sailing Yachts

Her name is Elevate. She is a conceptual design from Hullform and Invisive. Two designers out of Romania with a vision unlike any other...
Read more
- Advertisment -