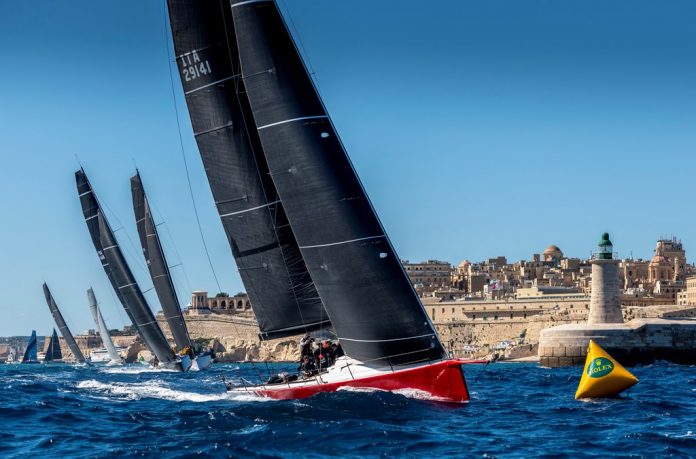 17.00 CEST Even with a reduced fleet, half the size of recent years, it was hard to not get sucked into the emotion and atmosphere of today’s Rolex Middle Sea Race start. The 41st edition got underway, as planned, on schedule and, most importantly, all clear. Seven starts and 50 yachts. Given the backdrop of a global pandemic, it marks a remarkable achievement for the organisers, the Royal Malta Yacht Club, and its highly professional volunteer team. As we go to press, the main body of the fleet is streaming across towards Capo Passero on the south eastern tip of Sicily. Impressively, the leading multihull, Maserati (ITA), was abeam the lighthouse on Isola di Capopássero at 1445 CEST, a mere 2.5 hours after its start.

It was a glorious day to start a yacht race. Valletta’s golden limestone bastions, rising boldly from the waters of Grand Harbour, bathed in bright sunshine. The force 4 north westerly, creating a whitecap strewn vista beyond the breakwater, was sufficient to allow crews to clear the line with relative ease. The pin end at the foot of Fort St Angelo was understandably favoured with Valletta casting a wind shadow over section beneath the Saluting Battery, where the race committee was located. The early starts were close fought affairs with teams keen to press home an advantage on their immediate opposition.

Class 1 Start
The most powerful monohull start, and the penultimate in timing, took a while to wind up. Aragon (NED), the biggest in the fleet, belted across the start with the smaller Wild Joe on her hip and just to leeward. The arguably more powerful I Love Poland and E1, together with Sisi-The Austrian Ocean Race Project were slow to power up in a diminishing wind. Aragon held position and nerve to exit on one tack. Once on the wind, I Love Poland took control overhauling both Aragon and Wild Joe by the turning mark at St Julian’s. If conditions do as predicted, the Polish crew will have their work cut out to protect the lead overnight. Many of the Polish crew on E1 are doing the race for the first time. Sailing skipper and helmsman Rafal Sawicki was enthusiastic ahead of the start: “We’re a mainly amateur crew, and we are very happy we can do this 600-mile race even with all the problems around the world. It is really good that the organisers have managed the race and we can take part. It is a must do race.”

Multihull Start
The six-boat multihull class was an extraordinary sight. Reminiscent of a Klingon battle fleet (for anyone that remembers Star Trek from the 1970s), five racing trimarans set up their timed start-line runs from deep within Grand Harbour. Poor Asia, the Outremer 55 Light, more cruising than racing in this company, looked like a startled rabbit in the headlights as she tried to keep clear and find her own lane. Riccardo Pavoncelli’s MOD70 Mana crossed at speed edging Maserati and leaving Antoine Rabaste’s larger Ultim’Emotion in her slipstream. Mana only arrived in Malta yesterday evening. Brian Thompson commented ahead of the start: “We are very excited about this year’s Rolex Middle Sea Race. It is probably the best multihull fleet we have had and, this year, the racecourse looks as challenging as ever.”

Maserati had cut their arrival time even finer, reaching the Valletta Fairway Buoy at 0800 CEST this morning and starting the race without setting foot on Maltese soil in an effort to avoid a period of isolation when they return to Italy after the race. It was quite a sight as Maserati chased Mana through the fleet after exiting the harbour, eventually overhauling them 10nm after the laid mark at St Julian’s.

Class 2 Start
The five-boat group is many people’s favourite to provide the overall winner under IRC. Eric de Turkheim’s Teasing Machine (FRA) has form at this race winning her class in 2017 and finishing third overall. Vadim Yakimenko’s Russian TP52 Freccia Rossa has won the Rolex Giraglia and is reckoned to be a demon in the light conditions predicted to lie ahead. These two led from the line with Freccia Rossa breaking free of the harbour confines ahead of Teasing Machine.

Class 3 Start
A fight for the favoured pin end caused several teams to suffer a less than perfect start. Maksim Nemchenko’s Farr 45 Favorit plus, stayed out of trouble and perfectly executed towards the middle of the line. Dominique Tian’s French Ker 46 Tonnerre de Glen adopted the same tactic. Favorit plus led the class out of Grand Harbour, much to the delight of the team whose home port is Kotor, Montenegro. At 1700 CEST Kito De Pavant’s Class 40 Made in Midi was leading on the water.

Class 4 Start
Right from the gun, two Maltese yachts locked horns in a battle that is set to continue around the 606nm course. Sean Borg’s Xp44 Xpresso and First 45 Elusive 2, skippered by Christoph, Aaron & Maya Podesta, both made a great start. While Xpresso was the first boat in class to leave Grand Harbour, after rounding the Fairway Buoy, Elusive 2 soon took up pole position on the water.

Class 5 Start
Jonathan Gambin’s Maltese Dufour 44R Ton Ton Laferla judged their approach to the start to perfection and found good breeze to win the exit from Grand Harbour with the crew stacked high on the windward rail. Also starting well were Paul Debono’s Elan 410 Bait in their first race, Jonathan Camilleri Bowman’s Maltese Falcon II, Alexey Moskvin’s J/122E Buran and Max Muller’s German Luffe 4004 Prettynama2. Towards the back was Italian entry Mia. The owner, Luigi Stoppani, is taking part in not just his first ever Rolex Middle Sea Race, but his first race ever: “Last year I bought my boat, and decided I needed to get to know myself and my boat better. So I took the chance to participate in this race. There are many difficult parts, but we are prepared: the boat, the sails, and the crew, we are ready to start.”

Class 6 Start
The Grand Soleil 40 Aziza, sailed by a Latvian crew and skippered by Ilgonis Balodis, started on port tack at the pin end and pulled off a stunning start. Starting well too was the young Maltese team on J/109 Jarhead, skippered by Lloyd Hamilton. Another J/109, Chestress from Italy, also put in a good start. The owner, Leonardo Petti, is on his second Rolex Middle Sea Race: “We have not sailed as a crew since the race last year. We wanted to, but it has not been possible,” Petti announced. “I think this is one of the most beautiful races I have ever done. The course is fantastic. It is wonderful to see volcanoes, to experience hard conditions. It’s tough.” One of the smallest yachts in the race had the honour of leading the class out of Grand Harbour: Jean-Francois Nouel’s French Sun Fast 3200 Hakuna Matata. At 1700 CEST, Jean Luc Hamon’s French JPK 10.10 Raging Bee was going well.

Oyster Yachts has announced the dates of its fourth Oyster World Rally, allowing a limited number of lucky sailors to reserve their...
Read more
- Advertisment -