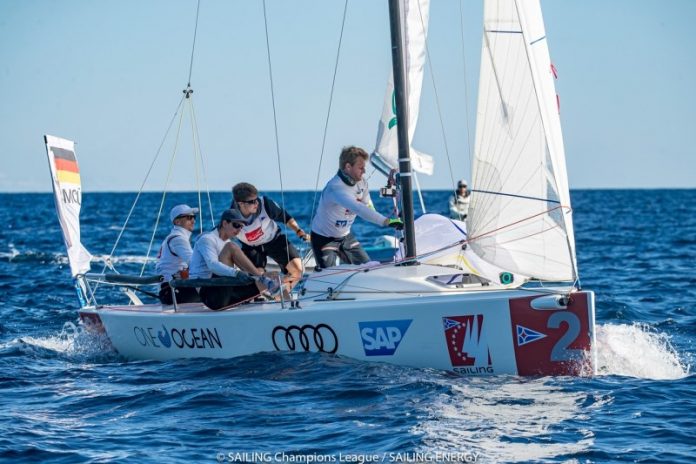 It was a perfect last day of racing at the Audi SAILING Champions League that saw the German team from Segel-und Motorboot Club Überlingen cinch the highest spot on the podium. The Italian team from Aeronautica Militare came in second ahead of the Swiss team from Seglervereinigung Kreuzlingen in third place. The event was held from October 15th to today and was organised by the Yacht Club Costa Smeralda with the support of Title Sponsor Audi and main partner the One Ocean Foundation

This morning at 10AM the teams were on the water and ready to go. They were racing off Porto Cervo in mistral wind from 12-15 knots. Three more flights were held today bringing the event’s total to fourteen completed flights and 56 races. At the end of all of the flights the teams that have finished in the top four positions and have qualified for the final series are Aeronautica Militare, Segel- und Motorboot Club Überlingen, Seglervereinigung Kreuzlingen and Akhmat National Sailing Team.

After a mixed bag of results in the previous days of racing, today the German team from Segel-und Motorboot Club Überlingen stayed concentrated and had their best day. With two wins out of four races they are now the champions of the SAILING Champions League 2020. The Italian team from Aeronautica Militare is second after sailing well and outing up a good fight today. On the third step of the podium we have the Swiss team from Seglervereinigung Kreuzlingen who were edged out in the final race, just a few seconds behind the German team.

Michael Zittlau, skipper of the Segel-und Motorboot Club Überlingen team: “I still can’t believe that we have won the SAILING Champions League. It’s incredible, we’re from a small Club on Lake di Costance in Germany and we came here thinking that we might manage to finish in the top ten at best. We were sailing against some top level teams, in the final event we could barely keep up but in the end we won and it feels fantastic!”

Michael Illbruck Commodore of the YCCS had these words: “In four days we have seen all kinds of weather conditions, the teams sailed in gusts at up to 30 knots. I have to say that it has been a real challenge for the twenty-seven teams that have participated! Events like these embody the fundamental values of sailing like sporting spirit, competiveness and a sense of belonging with one’s club. We hope to welcome many teams again next year here in Porto Cervo!”

Following a 12 month Media blackout with respect to the Global Pandemic, The 2022 Golden Globe and 2023 Ocean Globe Races are...
Read more
Regatta

Joschke Completes her Solo Round the World Outwith the Vendée Globe

Franco German skipper Isabelle Joschke was rewarded with beautiful spring sunshine and a big, warm and affectionate welcome back to the Les...
Read more
Regatta

Nearly every Vendée Globe, including this ninth edition, has delivered a sting in the tail of one sort or another to unfortunate...
Read more
- Advertisment -

Triton’s new 13000/2 TE, standing for Titanic Explorer, is designed to be the deepest-diving, acrylic-pressure-hulled submersible ever produced. It also is the first with...
Read more

It, equipped with a submerged body, wings able to make it "take off" and a system of mobile hulls, has characteristics that...
Read more

"A-Frame" is the name of the crane designed and built by AMS in collaboration with the Cantiere delle Marche for the first...
Read more

ADSB with Novamarine for the production of rigid hull inflatable boats