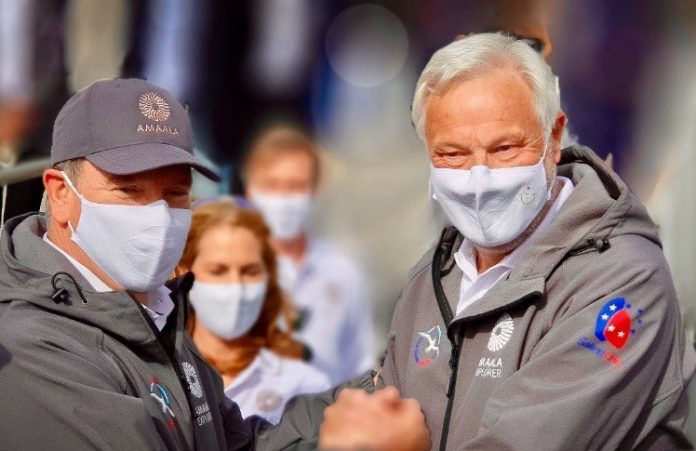 The OceanoScientific Mediterranean Contaminants Expedition 2020 ended on Thursday 29 October at the honorary pontoon of the Yacht Club de Monaco, from which the Amaala Explorer maxi-catamaran set sail on Thursday 15 October thanks to partnerships with Amaala and Biologique Recherche, as well as to the sponsors of the OceanoScientific France and Monaco associations. That same evening, Yvan Griboval, the initiator and director of the CO2-free oceanographic campaign by sail under the scientific direction of the Institut Français de Recherche pour l’Exploitation de la Mer (Ifremer), took stock of this sailing expedition from Monaco to Porto Cervo (Sardinia), Barcelona (Spain) and La Seyne-sur-Mer (France), during a dinner conference at the Yacht Club de Monaco. At this occasion, the naviator – explorer specified his future objectives as president of the OceanoScientific associations and the OceanoScientific Expeditions director.

“When I returned from the OceanoScientific Expedition 2016-2017, I was convinced of the need to adopt a common denominator of Humankind as a means of raising the awareness of the public at large about the imperative need to better understand the Ocean in order to better preserve it. I thought music would be the perfect medium. That was how we first thought of an Anthem of the Ocean which became Love the Ocean written, composed and performed by the young Monegasque artist Olivia Dorato,” Yvan Griboval explained during the dinner conference. Love the Ocean was broadcast for the first time and presented to the Sovereign Prince at the arrival of the Amaala Explorer maxi-catamaran in Monaco on 28 October.

“However, since last spring’s lockdown and even more at the end of these two weeks of sailing, I am now convinced thatthe best way to make the world population aware of the importance of the Ocean is to help oceanographic and scientific research focusing on the well-being of human beings and their health. We shall continue to collect physico-chemical data at the Ocean – Atmosphere interface, in particular thanks to the new version of the OSC System. But we shall now go much further in the scientific approach during our next OceanoScientific Expeditions by sail without any CO2 emissions or waste. To do so, we are working hard with the Centre Scientifique de Monaco (CSM) and are planning a forthcoming OceanoScientific Expedition – this time on the theme of coral and in the Red Sea – setting sail on the Thursday of the next Monaco Ocean Week, in March 2021”.

“The corollary of that decision is that I shall not be able to sail around Antarctica during the Southern Winter as I wanted so much to do!” said Yvan Griboval, not without emotion. “It is too personal an act, even selfish considering the time required for the preparation (over two years), and then sailing (four to six months). Three years and a lot of money to attempt a personal “feat”, seems somewhat pointless. It would be three years lost for our oceanographic activities for the benefit of Health, also lost for our thirteen-year-old triplets. They need their father’s presence too much at this time of life when their adolescent dreams form the future…”

Drawing from the lessons learnt during the OceanoScientific Mediterranean Contaminants Expedition 2020, Yvan Griboval insisted on several parameters which will now guide the organisation of the next OceanoScientific sailing expeditions, scheduled to be by catamaran rather than monohull.

“By having on-board Linn Sekund, the marine biologist of the Team OceanoScientific, we realised the importance of having a scientist by our side to optimise the efficiency of our sailing expedition. Similarly, the presence of the On Board Reporter (OBR) Manu Valadés Escobar allowed us to send quality photo and video images to the social networks, and then use them for a well-illustrated conference just a few hours after our return to Monaco. It is essential to increase the audience for our adventures and, in doing so increase their impact tenfold to raise awareness about the need to preserve the Ocean”.

“We dedicated each port call to our local partners so that they could communicate about their own actions to raise awareness about Ocean preservation. We are therefore extremely pleased to have worked with One Ocean Foundation in Porto Cervo; with the Fundación Ecomar chaired by Theresa Zabell and with the Fundació Navegació Oceànica Barcelona (FNOB) in Spain; with the Toulon Provence Mediterranean Metropolitan Authority (TPM) and its eight ports, including that of La Seyne – Brégaillon where the Amaala Explorer was docked. Without forgetting the faithful support of the Prince Albert II of Monaco Foundation, which provided its backing for the exhibition of the plankton fresco produced on the quayside of the Yacht Club de Monaco by the OceanoScientific Monaco with the photos of the underwater photographer Greg Lecœur.”

On the return to Monaco, Amaala, the main Partner for the OceanoScientific Mediterranean Contaminants Expedition 2020, was represented by Nick Naples,Chief Executive Officer and Brendan Jack, Chief Sustainability Officer.

Nick Naples said, “We are proud to sponsor the OceanoScientific Expedition. It perfectly aligns with our goal to create a luxury destination that is a global leader in sustainable tourism.”

Brendan Jack took the floor to recall: “On the Amaala site in the Red Sea we have one of the finest remaining coral reefs in the World. However, as with all of the world’s reefs, it too faces the same climate change and human activity based threats, such as sea temperature rise, ocean acidification, and pollution… For these reasons, the importance of the scientific research being carried out by the OceanoScientific team during this Expedition, and the equally important analysis of the collected sample data by Ifremer, cannot be emphasised enough. Our Oceans – the Med and the Red – are connected. We share common issues and we shall share common solutions”.

On Thursday, 29 October, the line of twelve exclusive products from the Love the Ocean collection was unveiled, produced by 727 Sailbags with recycled sails (mainsail, solent and staysail) from the OceanoScientific Explorer Boogaloo with which Yvan Griboval made his single-handed round-the-world OceanoScientific Expedition 2016-2017, the first oceanographic campaign by sail without CO2 emissions for sixty days under the 40th Southern Parallel.

Silent-Resorts is a new venture created by Silent-Yachts, the worldwide leader in solar electric luxury catamarans.- The company has developed a new...
Read more
Blue Ocean

The Ocean Race has announced the second in its current series of Ocean Race Summits will take place as scheduled on 27...
Read more
- Advertisment -