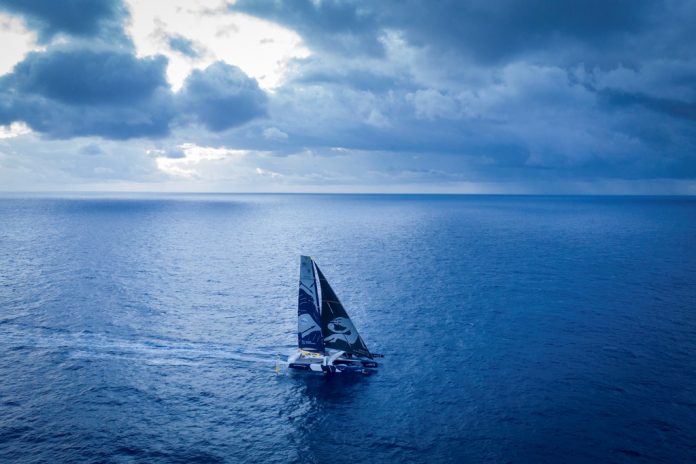 After three days at sea on their first round the world record attempt, Franck Cammas and Charles Caudrelier, in agreement with Cyril Dardashti, the director of the five-arrow racing stable, have this evening taken the decision to interrupt their record bid and return to their port of registry. This announcement comes as a result of damage that occurred when the boat collided with a UFO* yesterday, rendering it impossible for the crew to sail the Maxi Edmond de Rothschild at her full potential. Currently situated to the north of the Cape Verde archipelago, the sailors that make up Gitana Team are positioned some 1,900 miles from Lorient. Gitana 17 is now pointing her bows towards this destination.

“The decision to turn back really hasn’t been an easy one to make. It was carefully thought out and all the different parties involved in the project were consulted and the crew made the decision. It is motivated by two elements: the incident that occurred yesterday and the technical consequences discovered this afternoon, together with the quality of the window we’ve enlisted in. Indeed, day after day, our weather observations are confirming that the South Atlantic will not be showing us her best side, with a Saint Helena High that is a long way south, forcing us not just to take a big detour around the outside but also to plunge deep into the south to round the Cape of Good Hope. Even though the routing is still giving us a passage within the record time, we know that such a feat would require us to be at our full potential, which unfortunately is no longer the case. Turning back today means we can quickly return to our technical base, effect the necessary repairs and then very quickly get back on standby ready to set sail again this winter to conquer the Jules Verne Trophy”, concluded Cyril Dardashti.

When setting sail from Ushant in the early hours of Wednesday, the possibility of turning back was clearly mentioned by Franck Cammas before leaving terra firma. Though the doubts of the co-skipper of the Maxi Edmond de Rothschild were more geared around the reliability of the weather window that his crew were preparing to take on, this scenario of breaking gear was also among the cases discussed within the team in the run-up to the departure. This is not an unprecedented situation in the Jules Verne Trophy, in fact it even forms an integral part of the history of the record! Ironically, on this exact same date some 4 years ago, the crew of Idec opted to turn back whilst it was making headway to the south of the doldrums following a deterioration in the weather window. However, this first aborted attempt did not prevent them from setting sail again nineteen days later and returning to Ushant on 26 January 2017, the record and an exceptional new reference time in the bag.

Review of the damage

26 November 14:00 UTC – On Thursday afternoon, whilst slipping along downwind at over 30 knots between the Azores and Madeira, the Maxi Edmond de Rothschild hits a UFO (Unidentified Floating Object). The impact is violent, immediately causing the 32-metre giant to slow. Franck Cammas and Charles Caudrelier’s crew alerts the shore team and begins its investigations. The effect of the impact on the rudder of the port float and more precisely its trim tab, has caused a piece of the steering system to break. David Boileau immediately switches back to his role of boat captain and quickly proceeds with the repair. After 1hr at a reduced pace, the latest addition to the Gitana fleet gets back out on the hunt for the record at high speed. Visually, the rudder blade is not damaged but the appendage proves to be hard to manipulate, which suggests there is damage to the system for raising and lowering the port rudder. For all that, a check is impossible as the area located at the end of the float is too exposed and too dangerous to venture out to. The Maxi Edmond de Rothschild continues her course towards the equator.

27 November 09:00 UTC – To adjust their trajectory towards the equator, the men of Gitana put in several gybes. During the second, completed in the morning, when switching onto port tack, those on watch on deck notice that the port foil is also damaged and the evidence the crew discovers leave no room for doubt; they are the result of an impact, likely the same one suffered yesterday afternoon. Despite the crew being motivated to carry on, a series of exchanges throughout the day with their technical director, Pierre Tissier, and the manager of the design office, Sébastien Sainson, conclude that the appendage can be repaired at sea but the crew would no longer be able to use it at its full potential.

The Gitana Team wish the crew of Sodebo every success with their attempt.

Facebook
Twitter
Pinterest
WhatsApp
Previous articleVendée Globe Day 19, Between the South of Gough Island and the Doldrums
Next articleWhy Real-Time Data Matters to the Maritime Industry