Home Events Regatta Vendée Globe Day 19, Between the South of Gough Island and the...
EventsRegatta

Vendée Globe Day 19, Between the South of Gough Island and the Doldrums 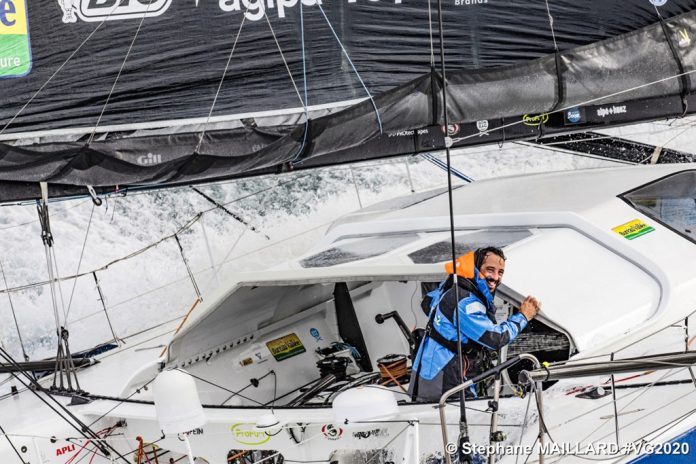 After cutting off part of his damaged port foil LinkedOut solo skipper Thomas Ruyant is back in full race mode, chasing runaway Vendée Globe leader Charlie Dalin who has escaped into the Roaring Forties, surging eastwards towards the longitude of Cape of Good Hope now with a cushion of 300 miles.

Ruyant cut two metres from the tip of his damaged foil in a perilous operation which was made easier by the unusually clement wind and sea conditions in the South Atlantic. His speeds will be compromised on starboard gybe especially during the ensuing month in the southern oceans but the skipper from north of France is determined to all he can to mitigate any loss of performance

“Thomas is moving well now and wants to get as far south, to cross the fleet before he gybes over and it is good to see him back in the race at almost full potential. In terms of numbers it is difficult to estimate how much his potential will be compromised, the designers and team are working on estimations to what the new polars would be but the boat is compromised we don’t have the righting moment that we used to, but whether that is ten percent or twenty per cent we don’t know yet. It might be two or three or four knots when the boat is being used at full potential.” Team Manager Marcus Hutchinson suggested on the Vendée Globe Live programme at lunch time today.

With more than 300 miles of a lead Charlie Dalin will be able to modulate his speed in the south on the Verdier designed Apivia. He was averaging more than 20kts at times today, now racing at around 41 degrees south, he gybed at around 0800hrs this Friday morning at around 50 nautical miles north of the Antarctic Exclusion Zone – the virtual ice barrier that the solo racers must stay north of. With around 1300 miles to go to the longitude of the Cape of Good Hope, Dalin should cross on Monday morning.

Finally clear of the sticky clutches of the South Atlantic high pressure the main peloton seem to have been gifted a great weather situation, not least Louis Burton (Bureau Vallée) and Sam Davies (Initiatives Coeur) who were first to break south three days ago. They are lined up on the face of a low pressure system which should catapult them east to close with slightly more wind pressure than their closest rivals to their north. But there is the enduring prospect of a fast, close race between the boats placed second to tenth today.

Yannick Bestaven is fourth this afternoon on Maitre Côq, 14 miles up on Kevin Escoffier (PRB) who in turn is 14 miles ahead of Boris Herrmann (Seaexplorer-Yacht Club de Monaco) 18 miles clear of ARKEA PAPREC sailed by Sébastien Simon. Further to the south Burton and Davies are 12 and 50 miles behind Simon.

Burton continues to impress. The skipper from Saint Malo is on his third Vendée Globe. His boat won the race in 2016-17 in the hands of Armel Le Cléac’h and Burton’s team had already organised its purchase before it had crossed the finish line last January. He trains independently of the IMOCA training groups at Port La Fôret and Lorient and works to a limited budget, such that the VLP-Verdier design is in the same configuration as when Le Cléac’h triumphed four years ago.

In his wake, Sam Davies is getting ready for a change in her conditions aboard: “We’re off now on the conveyor belt. I have been telling myself that this may be the last time we see blue skies for a while, as they are not very common in the Southern Ocean. The solar panels are being fully charged. I’m spending a lot of time outside to stock up with vitamin D before the South.”

There was a similar atmosphere with Kevin Escoffier (PRB), 5th in the fleet on a slightly more northerly route: “The world will be changing for us tomorrow. We’ll be sailing ahead of the front. We’re going to have to be fast to stick with it for as long as possible. You have to know exactly when to gybe in relation to the front to get in the right place for the low-pressure system forecast for 1st December. It will be slamming a bit more with winds forecast in excess of forty knots and heavy seas according to the charts. I cleaned up the boat to get ready for this ‘New World’ ahead of us in the Forties and the Indian Ocean. My next shower will probably involve using the kettle.”

Meanwhile Alex Thomson took the chance last night to further consolidate his repairs on Hugo Boss before he heads into the big south. But this morning he had the black and pink machine hammer down averaging over 20kts. He is 11th, 661 miles behind Dalin this afternoon. Front of mind will be memories of 2016-17 when he was 819 nautical miles behind Armel Le Cléac’h at Cape Horn but closed that gap to finish 16 hours behind in second place.

“It feels good to be focusing back on the race again and chasing the leaders into the Southern Ocean” Thomson said. “There is a long way to go but I’m feeling good and looking forward to heading downwind finally where I think we’ll really see what Hugo Boss is capable of”.