Relieved Escoffier speaks about his rescue by Jean Le Cam 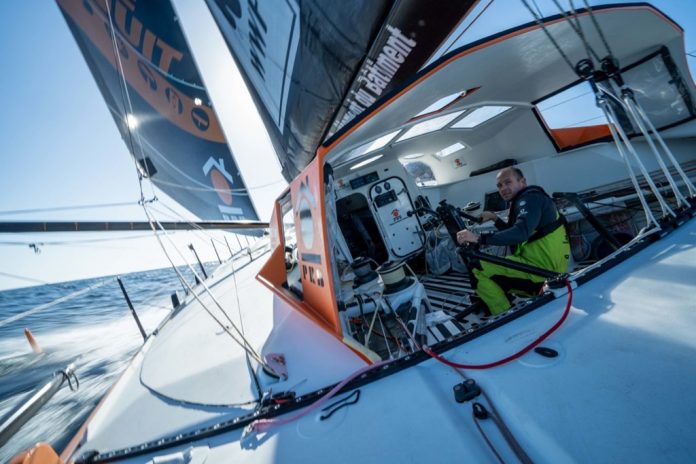 After being rescued from his liferaft by fellow Vendée Globe competitor Jean Le Cam in big seas and strong winds the early hours of this morning some 840 nautical miles South West of Cape Town, South Africa, Kevin Escoffier has been recovering on board Le Cam’s appropriately named IMOCA 60 Yes We Cam!

The 40 year old solo sailor, a member of a well known Saint Malo sailing family, had to abandon his IMOCA 60 PRB, within what he later estimated to be two minutes when his boat virtually broke in two after burying its nose in a wave while racing in five metre waves and 25 knot South Westerly winds. Escoffier only had time to grab his survival suit before being washed off the boat and clambering into his liferaft which automatically inflated.

Veteran 61 year old Jean Le Cam, racing on his fifth Vendée Globe, answered the request of Race Direction to divert to try and pick up Escoffier whose boat’s emergency beacon had been activated at 1346hrs UTC.

When he arrived in the area some two hours later he located Escoffier in his liferaft but was then unable to manoeuvre and prepare properly to effect a rescue on time before losing sight of the liferaft in the big seas, strong winds and growing darkness.

But it was only when he was directed close to a locator beacon position which coordinated with the predicted drift pattern that Le Cam spotted a reflected beam of light bouncing off a wave that he realised he had finally located Escoffier again. He plucked him from the liferaft at 0118hrs UTC this morning.

It was only when the two suddenly appeared together on a Skype video call which had been running constantly from Le Cam’s boat to a monitor in the Les Sables d’Olonne HQ that Race Direction suddenly realised the mission had been successful and Escoffier had been rescued.

A world renowned ocean racer may have been on only his second ever solo IMOCA race but Escoffier has won the crewed Volvo Ocean Race in 2018 on the Dongfeng team and was part of a successful Trophée Jules Verne round the world in 2012. He was key technical director of Armel Le Cléac’h Vendée Globe winning programme on the 2016-17 race.

The 49th BVI Spring Regatta and Sailing Festival, which was scheduled for March 29 to April 4, 2021, has been postponed until...
Read more
- Advertisment -