When two become one, Escoffier transferred off Yes We Cam! 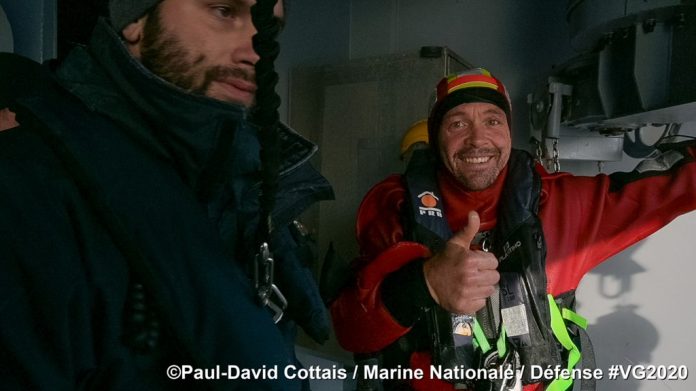 At around 0210hrs UTC at a location in the South Indian Ocean some 360 miles north of the remote Crozet archipelago, Kevin Escoffier (PRB) was successfully transferred from Jean Le Cam’s IMOCA to the Nivôse, a French Navy frigate.

Escoffier was dramatically rescued last Monday by fellow Vendée Globe competitor Jean Le Cam after his IMOCA PRB broke in two when it nosedived into a big wave. The 35 year old skipper from Saint Malo had spent 11 and a half hours drifting in a liferaft before being picked up by 61 year old five times Vendée Globe veteran Le Cam.

The evacuation of Escoffier – via a Nivôse rigid inflatable boat – went well, despite the big seas in the area.

And so Jean Le Cam has resumed his race in solo mode. In a message to the Vendée Globe Race Direction, Frédéric Barbe the captain of the Nivôse, wrote: “Kevin is in great shape, he is going to enjoy a hot shower. We are heading for Reunion Island. It is the start of beautiful day.”

Nivôse is a Floréal-class frigate which has 84 sailors on board and its main missions are the surveillance of maritime areas under French sovereignty in the Indian Ocean (Reunion, Mayotte, the French Southern and Antarctic Territories) and the fight against illicit activities at sea. It is based in Port-des-Galets, on the west coast of Réunion island, Nivôse is 93.5 meters long, 14 meters wide and has a displacement of 2,600 tonnes.

Sébastien Destremau, the skipper of the 26th placed Imoca Merci, has been finally forced to abandon his attempt to complete his second...
Read more
Regatta

Racing some 35 miles off the NE corner of Brasil, at Recife this afternoon, speeds remain very even between the top trio...
Read more
Regatta

He was briefly on the podium during the festive season, and now he’s back. Boris Herrmann is in the throes of pulling...
Read more
- Advertisment -

Sébastien Destremau, the skipper of the 26th placed Imoca Merci, has been finally forced to abandon his attempt to complete his second...
Read more

New York Yacht Club American Magic fell in both of its races on Day 2 of the Prada Cup, the Challenger Selection...
Read more

Prada Cup: A day of ups and downs in wind, foils and points

A tricky and yet revealing day for the Challengers competing in the PRADA Cup Round Robins due the to the tricky light...
Read more

On an ongoing mission to share its passion for sailing, Beneteau together with Seascape presents three new members of the 7th generation...
Read more
Load more