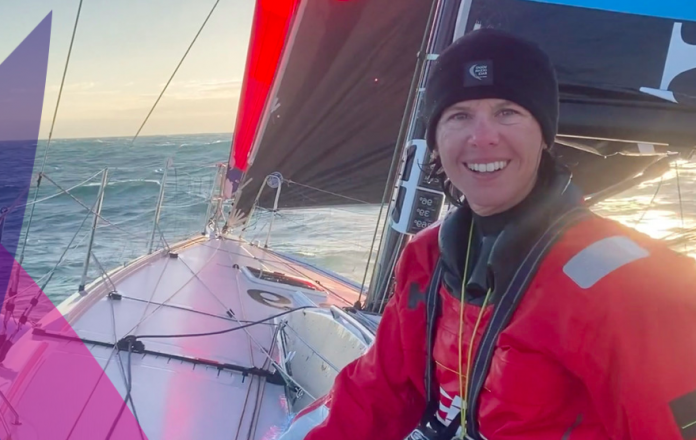 Having already represented Italy in the Laser Radial at London 2012 and in the 49erFX at Rio 2016, Clapcich is now set on joining the Mixed Two Person Offshore Keelboat Event at Paris 2024.

“In my background, I have two Olympic Games as well as the Volvo Ocean Race, on board Turn the Tide on Plastic in 2017/2018,” explained Clapcich.

“I’m a resident in the USA right now; my wife is American and I’m waiting for my citizenship. Because it has been more than four years since I raced for Italy, I would be eligible to represent the USA in 2024.

“I’ve been lucky enough to be part the sailing world for so many years, and I hope that I will still be around for another few years because I really love the sport.”

With a strong combination of Olympic and offshore experience already under her belt, Clapcich makes a perfect candidate for such a campaign, and she admits the “magic” of double handed offshore is what attracted her to this challenge.

“Being out in the ocean, especially just with two people on board in a really small boat, is quite an adventure,” she said.

“We face all the conditions that the weather gives to us and we need to be prepared for everything.

“I think the double handed offshore events are really growing sailing. It can be really hard to organise a team with 10 people or even more, if you think about the Maxi.

“But it can be really easy to just find a friend or a family member or a partner and just go out sailing, in a pretty small boat that is really manageable just with four hands on deck.

“The experience is pretty special. When you’re out there in the ocean with just two people on board, it can be pretty magic.

“I think the sailing world has started to really love it. We can see right now with the Vendée Globe; everyone is attached to the tracker to see what these amazing sailors are doing out there in the solo configuration, and the double handed is not so far off from that.”

Particularly important to Clapcich, as a female sailor, is that this new event will ensure that sailing is gender balanced at the Games, while she also believes it offers something new and exciting to the Olympic audience.

“I think it’s a massive opportunity for the sport, and also to show the world that sailing is really moving forward with gender equality and including women in the sport, and showing that men and women can play equally in the sport and in the boat,” she said.

“I think it will be a fantastic event. It will be the longest event in the history of the Olympic sport, in the pretty iconic Mediterranean spot of Marseille.

“It will be a really tough race no matter what the conditions will be; all of the athletes will need to be prepared for everything and it will be challenging for everybody.

“I think it will be pretty good for all the fans at home to follow the tracking and try to cheer for their home country sailors out there.”

Both Clapcich and Fielding have already started working towards their ultimate goal of making that start line in Marseille in four years; and if Clapcich’s enthusiasm is anything to go by, they are sure to give it their best shot.

“State Street Marathon Sailing Team’s preparation [for the campaign] has already been going on for a few months,” she said.

“We started in Newport, Rhode Island, and we moved down to Port Royal in South Carolina for the winter sessions.

“The goal is both getting better at double handed and single handed sailing – we think that being completely aware and comfortable by yourself will help your co skipper to be comfortable with you on board, and vice versa.

“We are focusing a lot on training, especially long sessions and night time sessions; we all know that it’s a bit harder compared to just sailing in daylight.

“I feel that we never stop learning something and I love [to learn] all about weather forecasting, routing, and how to sail from point A to point B in the fastest and smartest way possible.

“That’s something that is really challenging me and that I love to put a lot of energy in.

“I think it’s a real ‘360’ kind of training compared to maybe other sailing disciplines, when you’re way more focused into specific technical and short course tactics and strategic decisions – this is a way wider preparation.

“I have the feeling that probably four years will not be enough – for everybody, no matter who you are and where you come from!

“It will be a challenge for every country, for every sailor who wants to do this Olympic campaign.

“At the same time, it’s something that gives us big motivation every day to go out there and push really hard.”

In a generous offer of support for the 2021 ORC European Sportboat Championship held over 23-29 August, transport company DFDS has agreed...
Read more
Sport

Nova Scotia will host a 400-strong field of the world’s best sailors from over 35 countries when the World Championships for three...
Read more
Sport

Over the past 2 years, a new discipline of sailing called "Wing Foil" has emerged. Winging can be see as a crossover between...
Read more
Sport

The eyes of the global sailing community will be on Mussanah this week as 102 competitors from 16 countries across Asia and...
Read more
Sport

ILCA will celebrate the achievements of this five-decade run

From the Weekender to the Laser to the ILCA Dinghy The world’s largest one-design racing class turns 50 this...
Read more
- Advertisment -