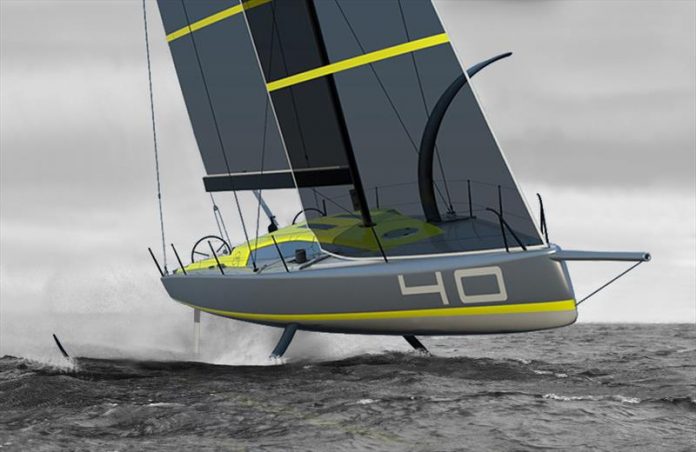 From the designers of the Persico 69F, the MW40OF is an offshore racer with full foiling capabilities packed into a manageable size and capable of normal docking without issues from foils sticking out and with safety and simplicity as driving factors.

Thought for a crew of 5, the concept is 40ft LOA and is equipped with fully retractable round foils, canting keel and twin rudders with elevators.

The whole process that went on designing and developing the 69F allowed us to confirm theory with practice in different aspects of the still evolving foiling ground and monohull foiling in particular. Despite the boat did everything that was planned her to do and outperformed expectations, it’s in the details and on the water where you bring up a great deal of confidence to take steps in new directions.

An offshore racer with full foiling capabilities, at a manageable size and capable of docking normally was an idea always around. Naturally we imagine to race such a boat in coastal offshore races we have at hand at our land home but of course the idea goes beyond and with some potential clients that could be interested in such a concept we thought to do a first design loop around such premises.

Putting all pieces together to come up with something that fulfil the goals you impose to is always a challenge but such a premise falls short when speaking about a foiling vessel.

While the concept may seem straight forward in this foiling era, there are plenty of constraints that quickly set some clear limits. It is the usual short blanket problem as you will want to cope with several aspects: Foiling Performance, Floating Performance, Static Stability requirements and last but not least a handful of practical issues to sort out.

You cannot cover all aspects in an ideal way and they sometimes work against each other, so you must choose priorities and find some balance to make the concept work.

A relatively small boat helps on the foiling side due to its better power to weight ratio, but not so much on stability requirements as a smaller boat and greater beam/length ratios means heavier bulb weights to meet static stability requirements. So, after some initial studies a 40ft seemed a good compromise to start with and from where concept could grow or shrink depending on client needs and/or further developments.

Foil & Keel must be thought as working together. Configuration needs to maximize foiling capacity, fulfil docking requirements but also promote transverse stability on flight. On top of that it must not compromise non-foiling conditions too much.

One of our driving goals had dynamic transverse stability on flight as in the end means how easy the boat will be to keep foiling through changes on wind strength or waves which is particularly important in a boat that takes the most from high average speeds more than top speeds as is the case of offshore and long-distance coastal races.

The very first big choice is the option to have a fixed keel instead of a canting keel. This allows you to have a lighter boat to fulfil static stability requirements. But although that looks very tempting on paper, it might compromise dynamic stability of the boat in any other than smooth, flat water conditions due to the lack of upward force exerted by a fix keel at normal heel angles. On top of that the canted keel also helps pushing the boat out earlier despite being a slightly heavier boat. So, a canting keel system oriented to this particular use still seems to be a good compromise.

Foil configuration itself is pretty natural when thinking on a dock-able boat, with a fully retractable round foil being the way to go. But this foil geometry also makes sense with a boat that will always work with some heel to conform a double point support together with the keel at the front. This type of foil is relatively shallow and needs the heel of the boat to maximize its action. It also has the additional benefit of allowing complete removal on light wind conditions. Then a retractable double rudder set up stands up natural too with leeward rudder matching perfectly with heel and increasing righting moment.

Initial VPP studies show reaching and downwind foiling points already at 12kt TWS with boat speeds between 19kt and 30kt across normal wind range. There is also potential upwind foiling with TWS above 15kt yet with full use of the foil in winds above 10kts in what is usually called semi foiling or skimming modes with TWA in the range of 65-75. Further work will be carried out for an optimization of the rig and sail wardrobe towards defining final VPP figures and sail crossovers.

A double wheel was chosen to steer smooth and firm, integrated to the cockpit seats to save space. All running rigging is centralized around the back of the cabin as usual on offshore boats with a central pit and winches on the sides. Traveler track at the back made sense as its own bridge will conform part of rudders support structure and make for a safe cockpit enclosure. Also, room for a coffee grinder will be necessary to allow quick trimming of the mainsail when foiling although the details has yet to be developed as rig power management is crucial for a steady flight. An offshore styled type of cabin intends to cover the crew as much as reasonably possible completes the general exterior look.

A standard two spreader mast that stays inside the beam of the boat (no outriggers nor rotating mast) made sense to keep things simple and docking of the boat standard. Room for deck poles to optimize Code 0 type sails size and sheeting angles it’s on the plan in order to optimize both foiling and floating polars.

For more information and/or request of a bidding package please contact with info@wilson-marquinez.com