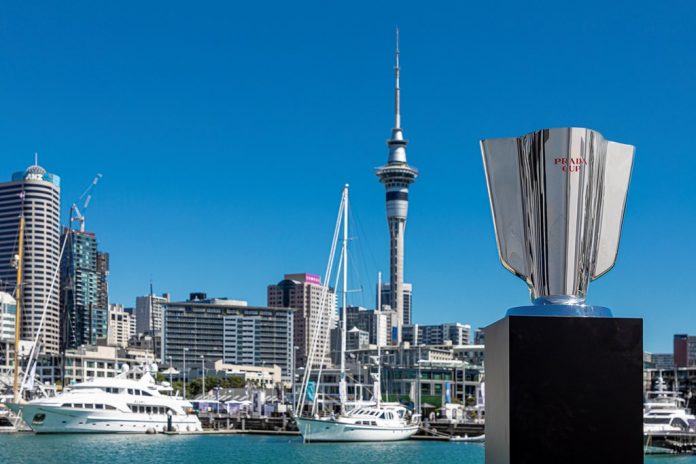 From tomorrow there can be no mistakes: each point counts, and each mistake less is one step forward towards winning the Prada Cup, therefore the possibility of challenging Emirates Team New Zealand in the America’s Cup Final Match.

The daily program includes two regattas starting at 3 pm (New Zealand time). All three teams will compete in 4 round robins, the first two scheduled for this weekend, the next ones taking place from January 22nd to January 24th . The team with the best score will move straight to the Prada Cup Final, whereas the other two will compete again in a semifinal to the best of seven races, i.e., the first to win 4 races will enter the Final.

The final act of the Prada Cup starts February 13th. Here the first team with 7 victories will win the Trophy and earn the right to challenge the New Zealand defenders. Racing promises to be tight and highly competitive, with each defending every inch of the course from their opponents. From the thrilling pre-start maneuvers, of which we have had an exciting preview in the December competitions, to the tactical choices throughout the course, every second will be decisive.

Luna Rossa Prada Pirelli will take to the water in the second match of Friday against the British challenger Ineos Team UK who in recent weeks has shown great improvements, both in terms of maneuvers and speed, as was to be expected from such a team.

Saturday will be the turn of NYYC American Magic, while Sunday will feature a double race for Luna Rossa who will first face the British and then the Americans.
The forecast is for two days of medium-light winds from west / southwest, whereas on Sunday the arrival of a front from the west could still create some uncertainty on the conditions.

Don’t miss any of our team’s racing and download the complete calendar here: https://bit.ly/2Kcl4o6

During the Prada Cup, Race Director Iain Murray will be able to choose from the five available racecourses, spread throughout the Hauraki Gulf, depending on the weather conditions.

The Racecourse configurations will be windward/leeward with an upwind start, windward gate, and downwind gate. Racecourse’s length will depend upon the prevailing weather conditions, and so do for laps’ numbers, which Race Director will declare before the start.

In the case of the AC75, the classic racing rules have been updated to meet these flying boats’ requirements for speed and performance.

In Italy, Rai and Sky will follow all the races live starting from 2:50 am.
On RaiDue, Giulio Guazzini will host with Edoardo Bianchi and Ruggero Tita. On Sky 205 channel, Guido Meda will support by Flavia Tartaglini and Roberto Ferrarese
To enrich the programming dedicated to this historic competition, the networks will include a series of interviews and features on Luna Rossa Prada Pirelli, the only Italian team participating in this edition, and on the America’s Cup, the oldest trophy in the world of sport, which in 2021 celebrates its 170th anniversary.
On our website, it will be able to follow the races directly from ACTV (America’s Cup TV) with commentary in English from Ken Read & Stephen McIvor together with Olympic gold medallists Shirley Robertson and Nathan Outteridge.

Facebook
Twitter
Pinterest
WhatsApp
Previous articleBestaven: it’s hard, I have the impression I haven’t been lucky
Next articleJBoats is excited to announce a sleek brand new 28 footer, the J9

Organizers from the Kalev Yacht Club and the Offshore Racing Congress (ORC) have announced a change to the Notice of Race that...
Read more
Events

Following the Race start from Lorient, France, at the end of May, the inaugural edition of The Ocean Race Europe will stop...
Read more
Events

For almost a year, the organising committee of the Semaine Olympique Française has designed and developed many measures to welcome the elite...
Read more
Events

The Notice of Race for the 31st edition of the Maxi Yacht Rolex Cup has been published today. The event, organized with the support...
Read more
Events

The 17th Edition of PalmaVela is Postponed to October 2021

Given the current health situation caused by the COVID-19 pandemic, the Real Club Náutico de Palma (RCNP) has made the decision to...
Read more
Events

Genova Italy will host the finish of The Ocean Race Europe

The historic maritime city is already the home of The Grand Finale - the finish of the next edition of round the...
Read more
- Advertisment -