The three musketeers strike out for Vendée Globe victory 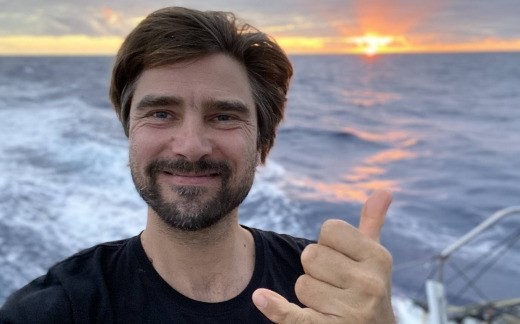 With just five days or under 2000 miles to go until the first skippers finish the ninth edition of the Vendée Globe the outcome still hangs in the balance. Today and tonight Charlie Dalin and Louis Burton of France and Germany’s Boris Herrmann have the chance of making a small but potentially decisive breakaway from the hard chasing group of six solo skippers, their small advantage could grow over the weekend. Meantime at the back of the fleet France’s Alexia Barrier and Finland’s Ari Huusela face the toughest moments of their race yet as they are set to round Cape Horn over the weekend in 40-45kt winds and big seas.

Dalin-Burton-Herrmann are the standout trio going into the last weekend.

If they are able to sail clear first from a high pressure ridge and connect with a small secondary low pressure system leader Charlie Dalin (Apivia), Louis Burton (Bureau Vallée 2) and Germany’s Boris Herrmann (Seaexplorer-Yacht Club de Monaco) will be rewarded by the chance to jump ahead of their rivals and perhaps establish enough of a gap to ensure they finish on the podium. But the timing to catch this little weather system is critical. Miss it and they will be left behind.

There is still every chance that Herrmann can become the first ever non French winner of the Vendée Globe, or indeed to match the results of his close friend Briton Alex Thomson who finished second in 2016-17 and third in 2012-13, Mike Golding who was third in 2004-5 or Ellen MacArthur, runner up to Michel Desjoyeaux in 2000-2001.

Speaking on the English Live show to Italian ocean record holder Giovanni Soldini who he has sailed more than 30,000 miles with – the equivalent of more than one lap of the planet with Herrmann warned.

“The next hours are very critical. It could be in the next six to 12 hours the race could be pre-decided. If I can keep a good breeze and speed, I am right now doing 16-17kts, if I can keep this with a good course to the NNE and can soak into the stronger breeze to the north of this high pressure if I can line up in that breeze and keep the same distance to Charlie then that would be a big relief. The opposite here is if the wind eases off and I get stuck 70 miles behind Charlie and they get away then things would work out very differently.

Thomas Ruyant, Damien Seguin and Yannick Bestaven are all on a very nice line and if I suddenly see them going 16 knots that can very quickly change the place between third and sixth place.  Nothing is decided today. It is incredible to have a kind of restart five days before the finish. It is incredible. I am looking forwards to gybing north and then getting into the bigger seas 4-5 metre waves like back to sailing in the Southern Ocean a bit.”

“The outcome of the match is not at all clear but I will just continue to sail as well as possible”. Remarked metronomically regular Dalin who has been the most consistent leader throughout the race, topping the standings on 199 rankings including today, the 75th day of racing.

And while the next five days of racing will be the most exciting and closest watched of any edition of the Vendée Globe yet, the first boats to finish could be in the early hours of the 27th ,  some positions on the final podium may yet be decided by the subtraction of the time allowances allocated by the International Jury to sailors who helped in the search and rescue of Kevin Escoffier between November 30th and December 1st after Escoffier’s boat broke in two. Herrmann carries six hours to be subtracted from his race time, Yannick Bestaven 10 hours and 15 minutes and Jean Le Cam 16 hours and 15 minutes.

Therefore the podium and other places may be decided by the subtraction of these redress times after the finish line.

Behind the current three leaders, the pursuers are unlikely to benefit as much from the low pressure systems. “They will continue to sail to the North,” says Christian Dumard, the Vendée Globe meteorologist. “And if they can’t get to the first system, they should benefit from the second system which is much larger.”

Italy’s Giancarlo Pedote (Prysmian Group), in seventh is part of this group, confirms: “We are going to continue heading north to follow the rotation of the wind. And as soon as we get out of this high pressure area, we will hook into the winds from the low to race downwind and reach to Sables-d’Olonne. Nothing is ever decided until the finish line.”

“Boris is a great sailor, he is maybe a little bit German but he has a nice spirit, he is a great guy and we have had a lot of experience together. I am so happy to see him going so well in the Vendée Globe. I think Boris is perfectly in the race I know he has studied very well the situation with the meteo. He has sailed a great race especially good in the Southern Ocean to come out with the perfect boat with no damage and that is the key. He works well with the boat and tries not to break anything. It is a great success to have the boat.”

Alexia Barrier and Ari Huusela, a Cape Horn worthy of their Vendée Globe

At almost 6000 miles behind the leaders approaching Cape Horn Alexia Barrier (TSE – 4myplanet) and Ari Huusela (STARK) are facing particularly tough conditions as they prepare for a challenging exit from the Pacific Ocean after eight days of hard sailing in squalls, rain and even hail. They can expect 40-45kts of wind and five metre seas.