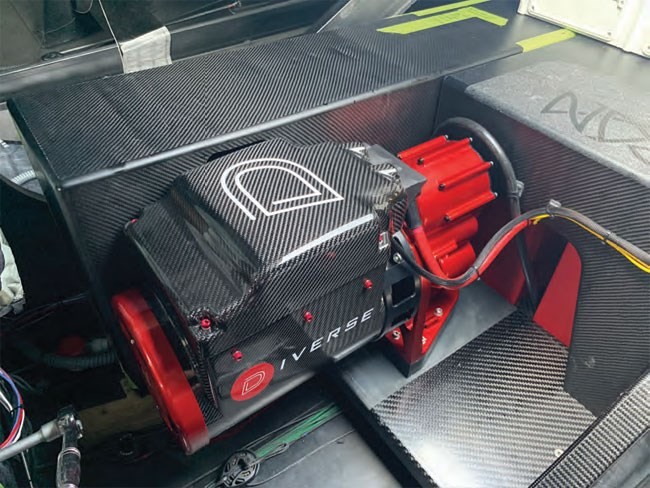 The fairways and marinas of the Hamble River have been quiet this year but in the light-industrial units set back from the river, innovation continues apace. The real lifeblood of the Hamble has always been its ecosystem of specialist companies, run by sailors for sailors, where a lot of next-generation yacht racing technologies are created and refined. In one of those sheds, Diverse Performance Systems produced load cells and pins for most of the Vendée Globe fleet and three of the four AC75 teams, but that’s only a small part of what they do. The clue’s in the name.

Diverse also designed and built the foil control system for the latest Hugo Boss; installed hydraulic sail control systems on Velsheda and Galateia that give both yachts a competitive advantage in manoeuvres; worked on DSS foil bearing designs for Canova and Wild Oats; invented game-changing technology for TP52 and Fast 40+ teams; developed new deck hardware for the ClubSwan 125… and those are just a few of their projects. With a wide-ranging portfolio of performance-boosting products and services – and two world-class prosailors as part of the management team – they’re very well placed to spot emerging trends in yacht racing.

‘We’ve had serious enquiries about systems for large – 60ft plus – foiling monohulls,’ says Diverse managing director Nick McGarry. ‘But not for grand prix boats, they’re for brand new offshore racer-cruisers.’ There’s a crucial difference between pro-racing foilers and the sort of boat that an owner-driver can safely enjoy. For all but the most talented (and athletic) sailors on the planet, sophisticated and largely automated control systems are needed to make a foiling yacht safer and easier to use. And while many companies can supply parts of the solution, Diverse is one of very few with a proven track record of delivering the complete, fully integrated package of hydraulic hardware, foil actuation and flight control systems, sail control systems and programming logic.
Diverse’s hydraulic engineering expertise goes beyond the narrow field of yacht racing. One of the company’s ventures into other marine sectors is supplying hydraulic systems for submersible craft, where complete reliability is far more critical.

One step back from the bleeding edge, perhaps the most notable of Diverse’s recent innovations is an ultra-light, minimum-drag electric saildrive. When the all-conquering Fast 40+ RÁN VII launched back in 2018, its electric drive system drew a lot of interest. Unfortunately, the original edrive proved unreliable and Diverse was called in to develop a better performing, more robustly dependable solution. The result – now thoroughly sea-trialled by RÁN and available for any 30ft-60ft yacht as either a standard or custom installation – is a 15kW propulsion system that’s 30 per cent smaller and 20 per cent lighter than any other saildrive on the market. A larger version for 60 to 80-footers is in development.

When we started looking at edrives we found that there was nothing on the market for raceboats,’ says Tim Powell, skipper of RÁN. ‘The saildrive units were all very large with far too much drag.’ ORC Category 3 dictates a motoring range of five hours at 6.2kts; Diverse’s e-drive goes beyond that with six hours at 6.4kts on one charge of the 48v, 550Ah lithium ion iron phosphate battery. ‘We’ve spent a full week testing – running it at max revs, checking battery life, confirming its reliability – and it has certainly met all of our requirements,’ Powell says. ‘The boat can actually make 8.5kts but we’ve capped the drive’s maximum power.’

‘We’re launching it as a product but we’re not ready to share all the details of how it works,’ McGarry says. He does reveal that the whole thing weighs less than 50kg; that nearly all parts except the motor itself and the battery are designed and manufactured in house; and also that the motor is air-cooled rather than water-cooled, which means two of the usual through-hulls aren’t needed.

With the e-drive now ready to roll out, Diverse’s design engineers are now working on a related project: generating power to charge batteries under sail. ‘We’re developing a new type of feathering propeller,’ McGarry says. ‘Most designs are efficient in either propulsion or regeneration mode, but not in both. This one will be efficient in both modes.’

"A-Frame" is the name of the crane designed and built by AMS in collaboration with the Cantiere delle Marche for the first...
Read more
Technology

The Warehouse supports ETNZ to achieve a carbonzero certified campaign

It is called "OPTIP" and is the tool that, through the use of Hololens and augmented reality, materializes objects by contextualizing them...
Read more
Technology

The British sailor, based in France, aims to demonstrate the potential of renewable energies by sailing around the world using a Hydrogen...
Read more
Boating

Fincantieri, through its subsidiary E-phors, specialized in providing cybersecurity services and products, has recently provided a pivotal training course in partnership with...
Read more
- Advertisment -