Gigawave 350 GW-X Boat, make your own monster wave for Surfing 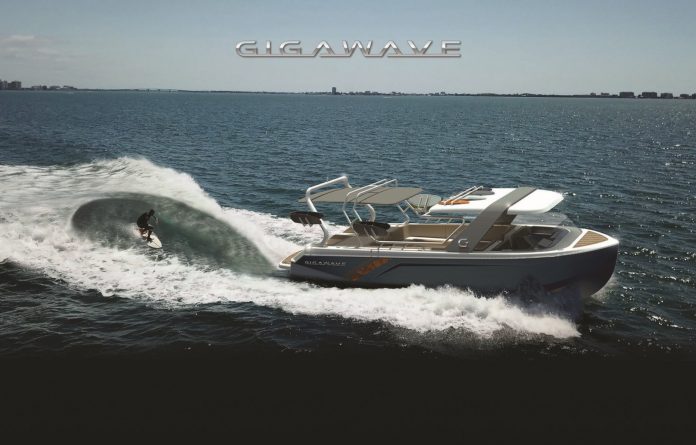 Whatever your line of work, you can’t make waves (shameless pun) if you don’t think outside the box, break molds and rules, push through glass ceilings, and all other similar cliches for saying that you really need to stand out among everybody else doing the same thing.

In this particular case, one particular company is doing it with a watercraft they call the first of its kind: an all-electric boat that delivers a head-height continuous wave for wakesurfing. Meet the Gigawave 350 GW-X concept from Gigawave.

Wakesurfing is a type of watersport that implies surfing a boat’s wake. The bigger the displacement of the boat, the bigger the wake and the bigger the amount of fun to be had by surfing it. For this reason, wakeboard or inboard ski boats with added ballast are preferred because they can create bigger wakes, and the propellers are underneath and less likely to make contact with the wakesurfer.

Gigawave is a startup that aims to shake up the industry of wakesurfing by delivering the biggest wave possible. The Gigawave 350 GW-X could also appeal to professional surfers for this very reason (why go searching for a swell if you could create your own?), which would expand the watercraft’s marketability considerably.

Introduced in late 2020, this type of watercraft is still very much a concept at this stage. That said, it does seem to have the upper hand to many other concepts we’ve discussed in our Coverstory section, in that investors and supporters have already expressed interest. Some of them also put their money where their mouth was, which means Matthew Blew and Ryan Wetjen-Barry, the two masterminds behind this product, have started work on a first prototype.

Testing is still some distance away, but as far as theoretical possibilities go, the Gigawave could become the largest displacement wakesurfer hull ever built and the first of its kind in appealing to both professional and amateur surfers. It would also be all-electric and incredibly powerful (though not exactly fast, since speed is not the focus here), so it would deliver noise- and emissions-free rides with minimal maintenance and running costs.

The Gigawave has “retro and playful” styling for a look “that has never been seen before,” the designers boast. Truth be told, it doesn’t look particularly thrilling or outstanding in terms of design, but its (theoretical) merits lie in its ability to create a continuous wave that is twice the size of similar boats.

“Sculpted by the wave manipulation system and given its size from the largest displacement wake surfing hull ever built, the continuous, head-height wave matches the size and feel of ocean waves,” Gigawave boasts. “It’s big, powerful, and clean; delivering a massive barrel that will take the sport to new levels.”

That wave is the direct result of the design of the hull. It has a V-deep entry angle for a smooth ride and is directly proportional to the boat’s impressive weight: 30 tons, of which 8,000 pounds (3,628 kg) is factory ballast. The lithium-ion battery pack is part of that ballast.

Measuring 35 feet (10.66 meters) in length and with an open layout on top (with a combination of soft- and hardtop for the cockpit and a tiny foredeck), it would seat 28 passengers in total, all of them facing rearward for easy access out at water. Power would come from twin 300 hp electric motors that would deliver a top speed of 18-22 knots and a surfing speed of 9-14 knots. According to the designers, the goal was never to make this boat very fast but rather to design it in such a way as to create that gigawave behind it. That meant adding weight and sacrificing speed.

The runtime would be of about four to five hours, with a standard charge time in around six hours – or two, using an industrial charger.

Gigawave hopes to be able to bring this wakesurfing boat to the market sometime next year, at a price of $600,000. “Our mission: be progressive, achieve ultimate performance, and build purpose-driven products to better ourselves and our planet,” the company states. The current mission is to raise money to build the first prototype and start tank-testing to try out these theories.

Yesterday marked a moment in history, as the first time a flying electric motorboat raced a flying sailing yacht. Both designs use...
Read more
Boating

From luxury catamarans to a foiling surfboard, these silent, stylish rides will get you on the water without needing a drop of...
Read more
Boating

Wooden Boats is no stranger to challenges. With its vocation of combining elegant design with efficient engineering and performance as its starting...
Read more
Boating

Navier, a Silicon Valley boating startup, is building a community of boating enthusiasts to push the adoption of clean and efficient watercraft...
Read more
Boating

Fiart: the Seawalker range is enriched with the new 35′

There is an emotional fil rouge that has been guiding the design of Fiart models over the last sixty years: these models...
Read more
- Advertisment -