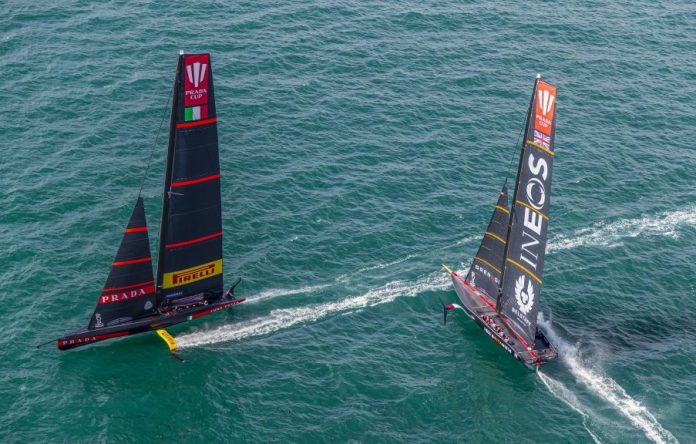 After a two-week stop, on February 13th the Prada Cup resumes with the final series of races that will determine the team to challenge defender Emirates Team New Zealand for the America’s Cup.

For the first time in the long history of the trophy, both teams competing in this final phase represent two countries in the European continent: Italy’s Luna Rossa Prada Pirelli against British Ineos Team UK.

Starting this weekend, the race program calls for two races a day, starting at 4 pm in New Zealand and 4 am in Italy. The series features regattas to the best of 13 races, in which the first team to win 7 races wins the Prada Cup, the prestigious trophy created by the Australian designer Marc Newson and handcrafted by the most prestigious Florentine silversmiths.

Luna Rossa Prada Pirelli reaches this final phase after winning against the US team NYYC American Magic in the semifinals, whereas Ineos Team UK enters the finals as the undefeated team in the first stage of the Challenger Selection Series.

Both teams have made the most of these past two weeks to optimize their boats and maneuvers. The semi-final regattas faced by Luna Rossa have proved invaluable towards improving boat handling and onboard communication for the afterguard. During this period additional modifications have been made to the on-board systems and some boat components.

“This last week has been very intense, we have worked in all possible areas that could give us an extra edge in performance. Squeezing the boat to its full potential becomes increasingly difficult as the performance gain curve begins to flatten out.

The design team and shore team have worked long hours to bring the boat to this stage, with improvements over the entire wind range.Boat handling on the water and communication onboard are also responsible for good performance gains. The sailing team, with the coaches and the whole team on the water, have done a great job.”

The final phase will introduce two amendments to the rules: new wind limits, established in the Notice to Competitors #39 of 10.02.2021 issued by COR / D, with reduction from 23 to 21 knots, and the reinstatement of the “delay card”, a time bonus allowed to each team to request a 15-minute delay for technical reasons.

The weather conditions for this weekend are extremely variable. Saturday forecasts are of light to moderate winds that could increase in intensity on Sunday.

“There is a high pressure that dominates the weather situation both east and west of New Zealand. There are two high pressure centers both west and east of New Zealand. This causes the gradient wind to be very weak and in the central part of the day we will have a breeze that could reach up to 10 knots. In the afternoon the center of high pressure from the east will become dominant and we will have an increase in the easterly wind, which could lead to an increase in the sea breeze up to 14 – 15 knots.

The gradient wind is from east – north/east, due to the high pressure east of New Zealand. It will be a moderate east – north/east wind. This wind could create a more pronounced wave on the north racecourses and more intense conditions on the racecourses near the coast, with rotations and shifts in intensity ranging from 15 to 20 knots due to the presence of the islands. “