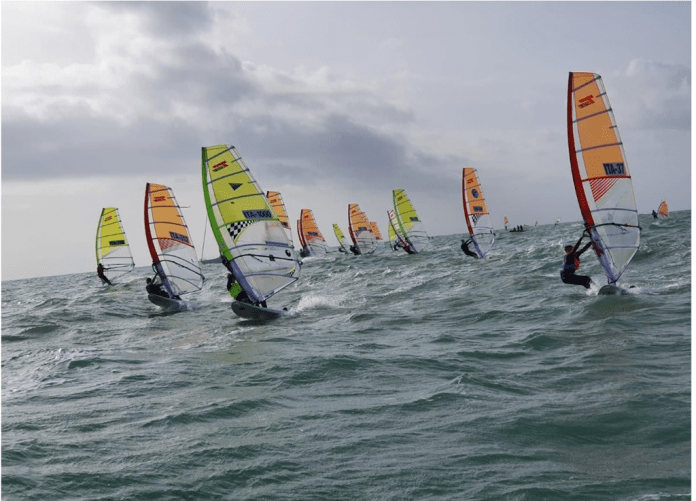 The Windsurfing Club Cagliari shines at the Memorial Marco Rossi Final Cup, the first regatta of the 2021 calendar for the Techno 293 sailboards. With fourteen athletes present, the Cagliari association took three first places, a silver and a bronze .

The regatta. The regatta took place in Ostia, under the aegis of the city section of the Italian Naval League and in difficult weather conditions, with strong winds always planing over 20 knots and waves. Another complication, the cold caused by the burian wave, the icy wind coming from Siberia.

In fact, the third and final day was canceled due to the low temperatures (-2, the minimum reached) and the ice present on the boards, which would have made the performance of the tests complex and dangerous. The committee thus decided to stop everything and make the rankings of the first two days definitive.

The results. Based on these, Federico Pilloni imposed himself in the ranking that added up the Under 17 and Plus (Under 19) thanks to five first places and a second in the final race, then discarded. In the same category, which also gathered the Plus, second place among the women’s Plus for Angelina Medde. Also present were Enrico Niola (11th Under 17), Alberto Angius (5th Plus, a few points from the podium), Lucia Napoli (22nd Under 17).

The second gold medal also came in the Under 13 with Pierluigi Caproni, winner of all four races held between Friday and Saturday. For teammate Mattia Lai, an 11th place.

To enrich the Windsurfing Club medal table, Teresa Medde’s success in the Under 15: third in the overall ranking, on a par with Davide Terzaroli (LNI Civitavecchia), conquered the primacy in the female ranking. On the third step of the pink podium, Alessandra Cosentino.

These are the best positions in the division that recorded the most massive participation by the Cagliari team: at sea also Alessandro Giagoni (11th overall), Igino Stefano Orrù (16th), Lorenzo Murtas (17th), Maria Aste (18 °) °), the latter in the first comparisons in the national field.

“Overall, the team scored excellent placings”, the balance of Andrea Melis, coach of the Techno 293 team of the Windsurfing Club Cagliari, “unfortunately the very intense cold prevented some guys from expressing themselves to the best of their abilities. The trip was an occasion for confirmation for many well-known names and a great training experience for newcomers ”.

“It was a great opportunity for all of us, it is difficult to compete in regattas during the Covid emergency”, underlined Federico Pilloni, “we had the opportunity to check the progress made and to compare ourselves with the opponents of the other clubs. I am particularly satisfied with my results, but also with having raced against boys in the Plus category, due to the single grouping. Too bad for the last day, there was a good wind and I would have really enjoyed it ”.

Fierce competition on Day one of the iQFoil International Games in Campione, Lake Garda, for the almost 200 riders coming from 29...
Read more
Wind surf

What we’re witnessing is known as the Sunbeam ConceptONE, created by two designers, Maximilian Troicher and Anja Didrichsons. To make...
Read more

After being forced to abandon her race on 5th December following a violent collision with a floating object south of Cape Town...
Read more

With the prospect of being unable to run the early season events to an appropriate standard and have them properly accessible to...
Read more
Load more