Home Regatta America's Cup A decisive weekend for the Prada Cup, on Saturday we return to...
RegattaAmerica's Cup

A decisive weekend for the Prada Cup, on Saturday we return to racing 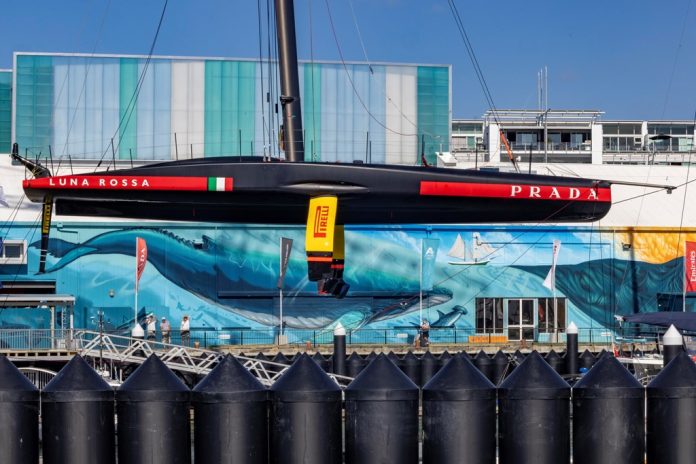 Luna Rossa Prada Pirelli who dominated the first two days of racing last weekend is firmly in command with a score of 4 to zero. Now, a few hours from the start of the last few matches, one wonders if the values ​​on the field are still those already seen.

The Italian crew has proven strong in a wide range of conditions and is confident in boat speed, tactics and communications.

A small break was foreseen in the program, last Monday was rest and Tuesday was a reserve day, it became five days. For the Cup teams, time is the most precious asset and we have already seen how much it can affect performance. The teams spent the days training (also allowed with level 3) or in the shed making changes to the boats and it is not surprising that they did not tell anything about what they did, discovered or changed.

The wind forecast for Saturday is a south-west breeze with a base of 10 knots and increases up to 14 knots and area E will likely be used. These are conditions in which, based on its previous performance, Luna Rossa will be is always found well. Ineos, on the other hand, struggled in the lulls, but a double-digit wind speed could be good for staying on the foils throughout the race and fighting.

If Luna Rossa is able to take home two more victories on Saturday to take the Prada Cup, she will have to beat Ineos Team UK once on Sunday. For Sunday the forecast wind is more uncertain, but according to some weather models the wind could change direction and blow from the north with a base of around ten knots and gusts up to 15. The reduction of the available regatta fields (B and C were excluded to avoid groups of over 100 people) creates an additional difficulty in finding the best course. The weather forecast fits Camp A, the most northerly and open in the Hauraki Gulf and Race Director Iain Murray could choose it.

Once again, the light medium conditions could play in favor of the Italians, even if one of the winning cards of Sir Ben Ainslie and Giles Scott is how they can interpret the variable conditions, the wind shifts: with two wins by Sunday evening Ineos lives to Monday, with a wind forecast of 15 knots from the north-east, more suited to the English boat that could start to hope again.

The Hauraki Gulf is known for difficult-to-predict and changeable weather, particularly during the summer months when land mass creates local conditions and sea breezes that can cancel each other out or combine forces to build a stronger wind. In these conditions, if it is necessary to race, rather than trusting the work done on the boats, it will be necessary to keep an eye on the racing field.