Home Sailing Not only America's Cup: Olympic sailors are back in the water
Sailing 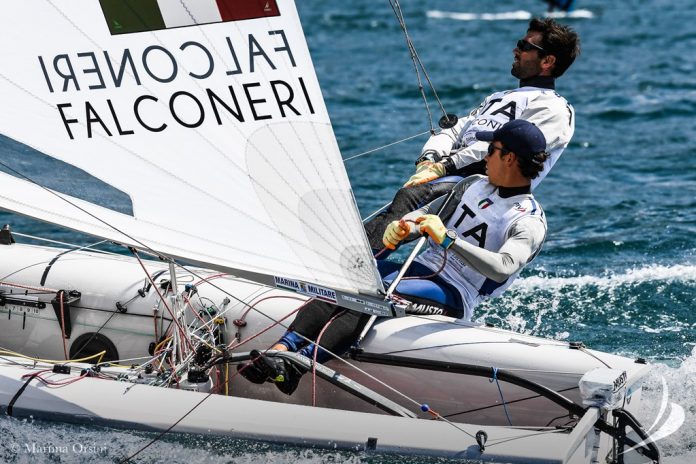 In the week that will see Luna Rossa in the first regattas of the 36th America’s Cup, Olympic sailing is also back on the water in the year of the Tokyo Games. Everything is ready in Vilamoura, on the Atlantic coast at the southern end of Portugal, for the World Championship of the 470 Olympic classes for men and women, with the addition of the title for the 470 Mixed category which will be Olympic from Paris (Marseille) 2024 The European Olympic Windsurfing Championships RS: X for men and women are also held on the same waters and on the same dates.

It is a first attempt at a restart for Olympic sailing, halted worldwide by the pandemic, and five months after the Tokyo 2020 Olympics postponed by one year. 80 boats registered for 160 athletes from 22 nations.

Organized by the Capable Planet Clube Náutico, in collaboration with the international classes 470 and RS: X and under the aegis of the Federação Portuguesa de Vela, the championships have started with the measurement procedures and will follow this program: for the 470 Class regattas from Monday 8 and final on Saturday 13 with the Medal Race in the top 10 of the rankings and award ceremony; for the sailboards, the regattas start from Tuesday 9th, while the final is on the same day of Saturday 13th, true Medal Day.

The entire organization of the championship follows very strict rules according to the anti-Covid protocols, all social and gathering opportunities are canceled, the athletes are checked and tested.

470 men’s or mixed world championship  – 52 male or mixed crews from 20 nations, some of the best crews competing, who will certainly also be in the running for medals at the Games.

The Spaniards Jordi Xammar and Nicolas Rodriguez, the French Kevin Peponnet and Jeremie Mion, the British Luke Patience and Christian Grube, the Greeks Panagiotis Mantis and Pavlos Kagialis, the Swedes Anton Dahlberg and Fredik Bergstrom, the Turks Denis and Ates are to be kept in sight. Cinar, the Americans Stuart McNay and David Hughes.

The big news of the 2021 World Cup is the clear development of the mixed man / woman crews, which will be an Olympic specialty in just three years in Paris (Marseille) 2024. The choices of many nations are geared towards the future, and in the men’s fleet half of the teams he actually runs for the Mixed rankings.

From the Spanish Silvia Mas Depares and Patricia Cantero Reina to the French Camille Lecointre and Aloise Retornaz, from the English Hannah Mills and Eilidh McIntyre to the Dutch Afrodite Zegers and Lobke Berkhout, from the Polish Agnieszka Skrzypulec and Jolanta Ogar to the Slovenian Tina Macarol and Veronika.

European windsurf rs: x female  – 28 athletes from 18 nations. The two blue athletes of Olympic windsurfing at this World Cup are Marta Maggetti from Cagliari (Fiamme Gialle), who boasts a double 5th place at the last two World Championships in Torbole in 2019 and Australia in 2020, and the Ancona Giorgia Speciale (CC Aniene ), ultra-victorious in the youth categories (even a gold at the Youth 2018 Olympics), two years ago she reached the Olympic class with a 6th and an 11th in the previous two World Championships.
Present the best athletes of the specialty, starting from the Dutch Lilian De Geus, world champion in office, and the French Charline Picon, second in the 2020 World Cup and gold medal at the Rio 2016 Olympics. To keep an eye also the English Emma Wilson, the Israeli Katy Spychakov, the Polish Zofia Klepachka and the Spanish Blanca Manchon, respectively fourth, sixth, seventh and ninth in the 2020 World Cup.

European windsurf rs: x male – 46 athletes from 20 nations. The Azzurri at this World Cup are Mattia Camboni (Fiamme Azzurre), European champion 2018 and Daniele Benedetti (Fiamme Gialle), the two historic friends from Civitavecchia who compete for the selection for Tokyo, in addition to the young Carlo Ciabatti (Windsurfing Club Cagliari), and Angelo Lilla (Circolo Surf Torbole).
Many champions of the Olympic sailboard competing: Thomas Goyard, third in the 2020 World Cup, the Israeli Shahar Zubari, fourth in the same championship, the Polish Radoslaw Fumanski, seventh, and the English Tom Squires, ninth.