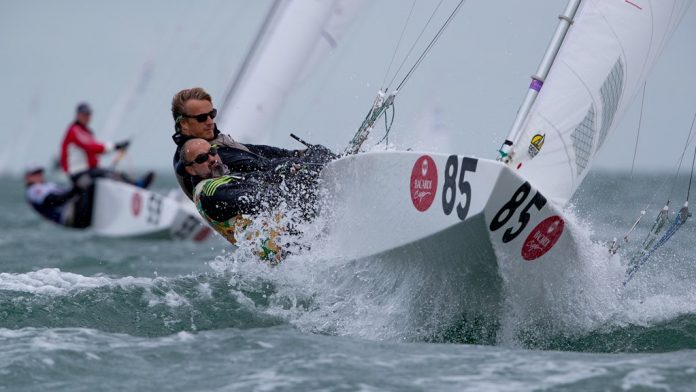 An epic opening day at the 94th Bacardi Cup on Biscayne Bay featured tropical temperatures, an overcast sky and a steady north-easterly breeze averaging 15 knots, with gusts up to 20 knots.

Racing got underway at 1130 hours in a battle for the front row as the twenty-five boats jostled for pole position as they relished the day’s stunning conditions. For many, the Bacardi Cup marks the first racing opportunity for many months, so it was no surprise to see a fleet of exhausted but very happy sailors return ashore. Dominating the race track were three former World Champions, who took the advantage off the line and proudly displayed their gold Star mainsail badges of honour to the opposition as they seized the top three places.

Despite not sailing together since last year’s Bacardi Cup, taking centre stage were defending Bacardi title holders and reigning World Champions, Mateusz Kusnierewicz/Bruno Prada who knocked out a masterclass of showmanship and skill, as they covered the fleet from start to finish. The pair owned the lead from the outset, opening up a great divide of over a minute to rack up their first leader board incision.

“The conditions were super tough,” commented Prada. “There were some choppy waves, so it was super challenging.”

Acknowledging the powerful conditions Kusnierewicz expressed a sense of relief, saying, “I think the race officer made a really good decision that we sail only one race, because for the fleet sailing in wind above 20 knots is, after a long break, well let’s say we are very warmed up!”

Recognizing they could not close the gap to the leaders, Eric Doyle/Payson Infelise focused on maintaining their speed and position, steadily increasing their advantage over third placed George Szabo/Guy Avellon. Doyle won the 1999 Star Worlds, and the pair won the 92nd Bacardi Cup in 2019. Szabo, who won the 2019 Star Worlds, and Avellon had their work cut out to hold onto third place, in a close call as the fleet pursued them in a frisky battle.

Augie Diaz/Marcus Koy made up significant ground after finding themselves back in the third row of the starting line up by the Committee boat. They were forced to head right off the start line, but it turned out well as they found flatter water and gained through the fleet to finish in fourth. An impressive day considering it was their debut race, as Diaz’s intended crew was unable to travel to the USA. Diaz finished second overall behind Kusnierewicz/Prada here last year and again 2nd behind them at the 2019 Worlds, so there is clearly unfinished business for Diaz as he seeks to become this year’s hero.

With a smaller fleet of twenty-five boats this year, the Organizing Committee has made an exception for the 94th Bacardi Cup only and adjusted the traditional one race per day format to allow up to ten races over the six days of racing. The warning signal for race 2 is scheduled for 1125 hours on Tuesday 9 March 2021. From Thursday 11 March 2021, the J/70 and Melges 24 Classes will join the action at the Bacardi Cup Invitational Regatta.

Covid-19 has changed the format of this year’s Bacardi Cup Invitational Regatta, with local restrictions meaning entry quotas were introduced for the first time, as well as national and international travel constraints also impacting the entry list. In collaboration with the Organizing Committee, all sailors are following Covid-19 protocols to minimize risk and achieve a safe environment, with preventative measures including negative Covid-19 test results, temperature checks, social distancing, mask wearing, staggered arrivals/departures and virtual briefings. The normal post-race Bacardi hospitality has been replaced by a cocktail takeaway, with all teams given a Bacardi cocktail bag to enjoy at home.