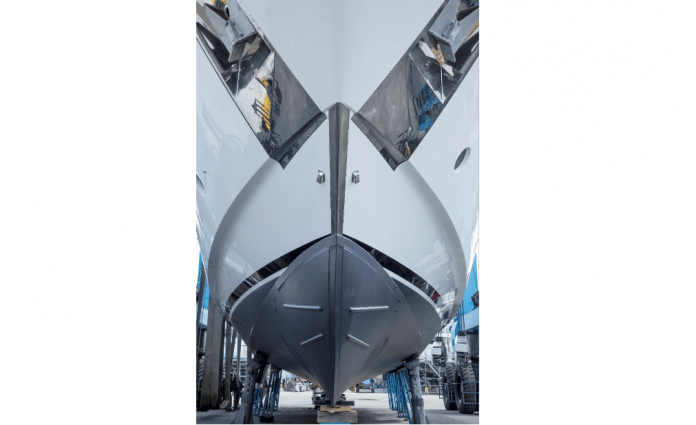 The Azimut|Benetti Research and Development Office took part in the European Project “Paint-it A new environment-friendly manufacturing approach for marine antifouling coating” (LIFE15 ENV/IT/000417 PAINT-IT), a major international research effort co-financed by the European Union through the LIFE Programme in the area of antifouling coatings for hulls, confirming its intention to contribute to a yachting industry that is respectful of the marine ecosystem.

With growing enthusiasm and awareness, Azimut|Benetti Group has for years been a leading force in efforts to improve the sustainability of the yacht industry on an ongoing basis. Through its Research and Development Office, the company supports and plays an active role each year in numerous research projects addressed to reducing the environmental impact of the yacht industry.

The latest important initiative to which Azimut|Benetti has made a vital contribution is the Paint-it Project, an interesting research effort led by an international working group with funding from the European Union. The project, supported by several leading industrial players, including not only Azimut|Benetti but also Colorobbia Consulting (Sovigliana-Vinci in the province of Florence) with its Colorobbia Research Centre, and the Rome-based universities of Tor Vergata – Department of Business Engineering (a point of excellence in this sector) and “Niccolò Cusano” – Department of Engineering, has led to the development of several innovative non-toxic antifouling coatings for marine applications featuring a high level of environmental sustainability, because no biocides harmful to aquatic species are released into the marine environment, unlike traditional antifouling coatings, which leach biocides based on the toxic action of copper compounds and other similar organic/metallic substances. As well as eliminating biocides, these coatings also have a significant environmental impact in terms of lower energy use, greenhouse gas generation and waste production, by reducing the need for hull maintenance, and of greatly reduced CO2 emissions.

The scope of this project isn’t limited to the yachting industry. In addition to the marine sector, the formula tested can be used in civil engineering, in wastewater treatment plants and, more generally, in plants that use water systems in various industrial production processes.

The Research and Development Office’s support for this project forms part of a broader strategy adopted by the entire Azimut|Benetti Group, which has always had a special focus on the sustainability of the production cycle by concentrating on a series of factors, including close control of the supply chain, the application of the best technological solutions (in terms of hull shape evolution, propulsion systems and the choice of materials, including Carbon Tech), the study of yacht disposal processes, and sponsorship of various associations with a mission to control and reduce the impact of the industry on the environment, including the Blue Marine Foundation and the Water Revolution Foundation.

This commitment not only represents a fundamental pillar of the corporate culture, but is also a response to the latest market trends driven by the new generation of owners, who are increasingly determined to enjoy their relationship with the marine environment in a more respectful, caring and aware way.