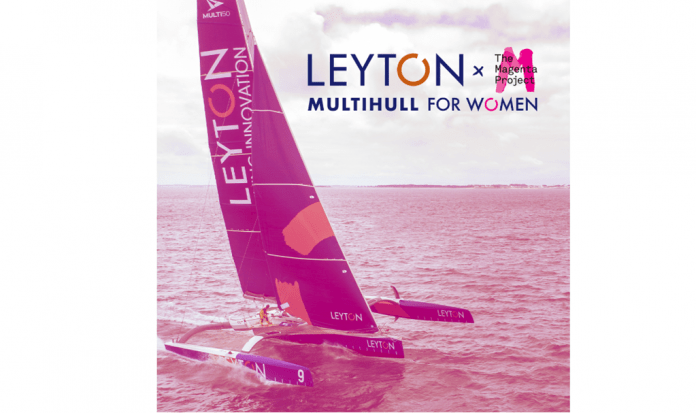 The Leyton x Magenta three-day clinics will include an opportunity to sail offshore overnight with Sam Goodchild, Leyton Sailing Team skipper and his crew onboard the Multi50, as well as a series of workshops and seminars with guest speakers from across the sport.  The first event will be held in La Trinité-sur-Mer in Brittany from the 20th – 22nd April 2021, and will be managed by Elodie-Jane Mettraux, a highly experienced offshore and match-racing sailor and founding member of The Magenta Project.

The Leyton x Magenta clinics are open to all female sailors who are keen to pursue a career in offshore sailing, in particular multihulls.
Two further clinics are planned for July and September, in southern France and the UK, respectively.

This initiative was launched by Sam Goodchild, Leyton Sailing Team skipper, who comments: “I know how hard it is to break into sailing, especially the offshore multihull class, so I am really pleased that we are able to work with The Magenta Project on this initiative.  There are some great female sailors out there that just need to get that lucky break and we are hoping, that through this process, we will be able to find sailors that could, in the future, join our team.”

The Magenta Project’s Abby Ehler adds: “We are really excited to partner with Leyton on this programme.  It is a great extension of our existing Magenta Mentoring Programme, and the opportunity that Leyton, Sam and the team are giving to these nine women is second to none.”

“One of the biggest issues holding women back is opportunity and running clinics such as these opens the door of possibility for those struggling to make an inroad into our sport.  This is Sam and Leyton’s initiative, and we are delighted to help them facilitate it.”

There will be opportunities for three female sailors at each clinic, and interested parties should, in the first instance, complete the application form [HERE].  Applications will close on the 26th March and the successful candidates will be announced on 2nd April 2021.

Caroline Villecroze, Leyton Chief Marketing Officer, concludes: “We are delighted that this project initiated with Sam can be launched alongside Magenta Project. Gender equality is at the heart of the Leyton Group concerns. We need to keep working at all levels to facilitate women empowerment. This sailing project is the perfect example. These clinics will allow talented women to gain experience in multihull sailing. We will also include a woman in the Leyton permanent crew which we will announce soon.”