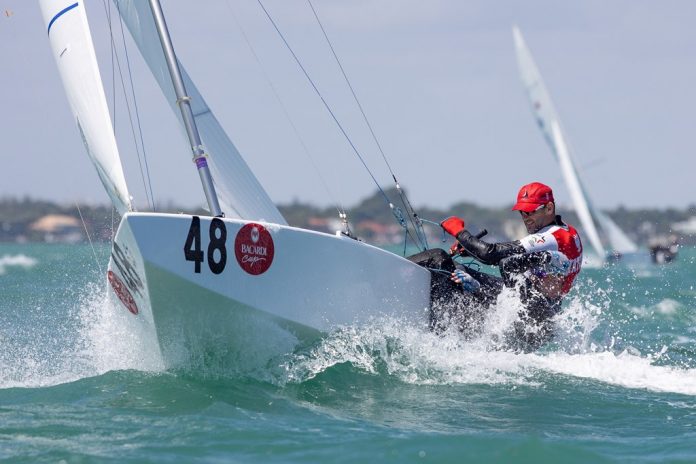 Perfect performance weather conditions delivered an average 14 knot breeze with occasional gusts up to 20 knots on Biscayne Bay, Miami, where racing continued for the Star Class contesting the Bacardi Cup and kicked off for the J/70 and Melges 24 Classes racing the Bacardi Cup Invitational Regatta.

A stunning day of racing delivered a full schedule, with three races for the J/70 and Melges 24 and two for the Star Class. No change in the Star Class frontrunners with Mateusz Kusznierewicz/Bruno Prada (POL) holding firm, whilst earning first day colours in the J/70 and Melges 24 were Travis Odenbach and his team on ‘Honey Badger’ and Bruce Ayres and crew on ‘Monsoon’.

Racing for the 94th Bacardi Cup continued after racing was called off yesterday due to strong wind, with two back to back races on a double triangle course and the race throw out coming into play after race 4. Continuing as fleet power brokers are defending Bacardi Cup champions Mateusz Kusznierewicz/Bruno Prada (POL), who racked up two more race wins to make it four in a row. Their unrelenting performance could prove invincible, but nobody triumphs at the Bacardi Cup win without a battle to the end.

Eric Doyle/Payson Infelise (USA) scored a 2,5 to sit 3 points off the leaders, with John MacCausland/Phil Trinter finishing 4,2 and, now able to discard their DNC from race 1, they advance nine places to 3rd overall.

“It was just phenomenal racing,” commented MacCausland. “Phil and I came out of the day feeling pretty strong. First race we didn’t start so well but came on strong and second race we were strong the whole time and very looking forward to the rest of the week. I think the conditions are going to get a little lighter so will give us old guys a little rest!”

MacCausland is racing with former band member Trinter, so they have a lot of chemistry despite not sailing together since 2015. The pair won the 2013 Star Worlds and Trinter won the 2010 Bacardi Cup with helm Rick Merriman.

Sitting on tiebreak 10 points with MacCausland/Trinter, the super talented Augie Diaz was the 2016 Star World Champion, but the closest he has ever got to the top spot at the Bacardi Cup is 2nd place last year. He and crew Markus Koy have been on a baptism of fire as Koy only flew into Miami the evening before racing.

“I had like a last minute arrangement with Augie Diaz, a guy which I ever wanted to sail with and finally got the chance,” explained Koy. “So the first two days were kind of tough, we got along, we developed ourselves as a team a little bit more. Even today we are feeling better as a team and still more races to come, so we are super happy and really looking to get better and better every day.”

Two more days to go and whilst Kusznierewicz/Prada seem unstoppable there is plenty to wrestle for.

The J/70s were up on the race track first and after a short postponement faced a wind against tide windward/leeward course. Three races were fought in 12-16 knots of shifty breeze and variable pressure ensuring plenty of twists and turns, although a relatively level playing field in the 17-boat Melges 24 fleet saw the race wins shared across different teams.

Ryan McKillen and his crew on ‘Surge’ strode ahead in the opening race, sitting pretty at the front of the twenty-two boat fleet. They are the top placed finishers from 2020 returning this year, but their follow up was not quite so special with scores of 17, 5 seeing them end their day in 7th overall.

Consistency from Travis Odenbach and his team on ‘Honey Badger’, as the only team scoring an all top-5 line, rewarded results of 4,2,1 with the overall lead.

“Today was a great day for us,” said Odenbach. “I learned a lot. We had great upwind boat speed and the thing I really want to work on now is downwind. This is really new to me as I don’t drive the ’70 a lot, so I am learning kind of the modes downwind. Tomorrow I think we will have a better idea of how to do that and it was really critical to pick puffs downwind and gybing to get across the course. Upwind was all about getting off the starting line. We did a really good job of that and being able to hold a lane. The guys kept me focused today so I was pretty pumped about it.”

Positioned just three points behind the leaders is reigning J/70 World Champion Joel Ronning and his team on ‘Catapult’, with John Brim and crew on ‘Rimette’ one point adrift in third.

Just 4 points separate the top three teams in the seventeen boat Melges 24 fleet, who kicked off racing at 1120 hours with a shifty breeze and short wave chop for their windward/leeward races.

Like the J/70, this massively competitive fleet saw different teams claim mastery of the track to seize the three wins, with race glory going to defending champion Bora Gulari and his team on ‘New England Ropes’, Laura Grondin’s team on ‘Dark Energy’ and Bruce Ayres on ‘Monsoon’.

Gulari opened with a win, but his DNF (did not finish) score in race 2 was not quite the follow-up game plan. Opting for a pin end start, a misjudgement pushed them into a scuffle with the pin boat anchor line and after eventually freeing themselves the fleet had done a horizon job. Even the worst happens to the best!

Ayres stepped it up a notch from a 5th in the opening race, to score 2,1 and edge into the overall lead by 3 points over Travis Weisleder on ‘Lucky Dog’ with Laura Grondin and her team on ‘Dark Energy’ in third.

Ayres is racing with three new team members, so first up they were working on team dynamics, but there is no shortage of pedigree with Ayres winning the Melges 24 Worlds in 2017, placing 2nd in 2019 and 3rd in 2018.

“It is really great to be back in Miami,” said Ayres. “The last regatta I sailed was last year here in March. Through the covid, working at home with the hotels has been brutal,” he added in reference to his professional career with Ayres Hotels, “so it is really good to get out in the boat. These guys are all really strong sailors, so I am getting the rig right and it makes my job a lot easier and the biggest thing is that we have fun.”

Restricted entries for all fleets due to covid-19 has seen the Bacardi Cup Invitational Regatta whittled down from its usual 200+ boat entry list and over 500 sailors to 64 entries, with only the Star, J/70 and Melges 24 able to race. The Viper 640 and VX One fleets have kindly stepped back and will re-join the racing in 2022.

In a generous offer of support for the 2021 ORC European Sportboat Championship held over 23-29 August, transport company DFDS has agreed...
Read more
- Advertisment -