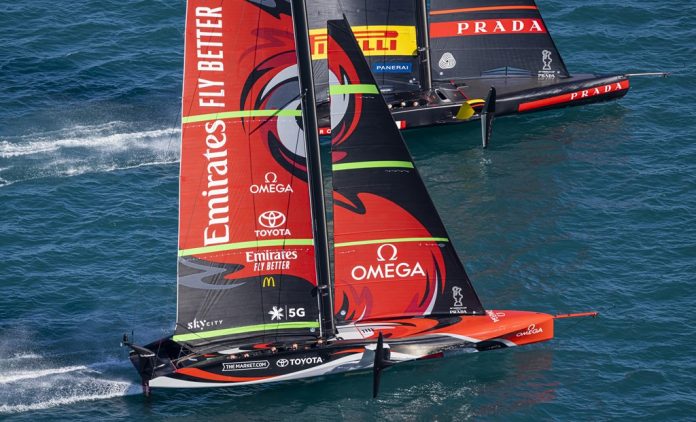 Day 5 of the America’s Cup was without a doubt the most heart stopping of the 36th America’s Cup. After four days of deadlock and races decided 5 minutes after the start, today Emirates Team New Zealand put 2 points on the scoreboard and took a 2 win lead.

For the first time in this America’s Cup both races saw lead changes. Unsteady and light winds played a big role in the change of fortunes as being on the foils meant the difference between leading and loosing.

With the scoreboard at 5:3, the deadlock is broken and tomorrow is going to be a key day. Will the Kiwis keep the momentum and win the 36th America’s Cup or will the Italians fight back and push the Cup into a seventh day? The question will be answered tomorrow at 4:15 pm NZT.

So far in the 36th America’s Cup neither team had won two races in a row, so was this the moment that the game changed? The left-hand shift that had been present in the closing stages of the first race of the day had persisted forcing Regatta Director Iain Murray to shift the course axis slightly to match. The breeze had also dropped slightly and was now down to 9 knots.

Luna Rossa Prada Pirelli were using a larger jib than Emirates Team New Zealand, would this pay off in the lighter breeze? Into the zone the Italians tried to get onto the Kiwis’ tail but had a slow gybe. The Kiwis were off the hook momentarily.

As they turned to head back Luna Rossa Prada Pirelli were ahead and to leeward. Seconds later it was an even start with the Italians at the pin end. Sailing high they managed to bounce off the Kiwis, forcing them to tack over to the right. If the Italians wanted the left they had now got it to themselves.

The breeze was staying low, this was a different race to race 7. When the pair came back together with Luna Rossa coming in from the left they were ahead of Emirates Team New Zealand: the margin 60 m.

As the pair crossed they swapped sides on the course. With the breeze now down to around 8-9 knots, keeping the pace on and avoiding costly manoeuvres was now key. At the second cross the Italians were still ahead and had extended their lead.

Towards the top of the course both boats had congregated towards the right-hand side of the course. The breeze was still showing signs of remaining at 8-9 knots. As Luna Rossa passed through Gate 1 they were 16 secs ahead as they took the right-hand mark. The Kiwis took the same mark. Seconds later during the gybe the Italian jib looked like it couldn’t be trimmed properly and was over eased for some time costing them distance all the while. Within seconds the race had closed up but there was further drama to come as the breeze dropped and the Kiwis splashed down leaving them dead in the water. Luna Rossa appeared to have got their jib back under control and were still at speed, hurtling into Gate 2 doing 34 knots to the Kiwis’ 14 knots.

But at Gate 3 there were problems for the Italians. The breeze had dropped further and their last tack onto the layline dropped them off their foils. They managed to creep around the right-hand mark and slide out to the right-hand side of the course. But there was no breeze here and the Italians failed to get back up onto their foils.Then came the news that the race would be shortened to 5 legs, finishing at gate 5, the final upwind leg.

Meanwhile, Emirates Team New Zealand were still flying and hauling back lost distance. The breeze was so light that the Italians had not been able to make any progress downwind, adding to their problems.
Emirates Team New Zealand managed to pull off a clean tack and stay on the foils they were hauling in distance fast. Now the tables were turning, the Kiwis still flying, the Italians stuck in the water and heading to the boundary as the Kiwis overtook their opponents. Penalty after penalty for the Italians as they sailed through the boundary, not that it made much difference. Getting back onto the foils was key.

As the Kiwis continued to sail at speed each gybe from here was crucial to maintain their lead. And while at the bottom of the course there was still a reasonable amount of breeze, there was still a tricky upwind leg to come. But Emirates Team New Zealand managed it perfectly and while the Italians got back onto their foils, they were now over 2,000 m behind with just over a leg to go.

And from there nothing changed as Emirates Team New Zealand won the second race of the day.