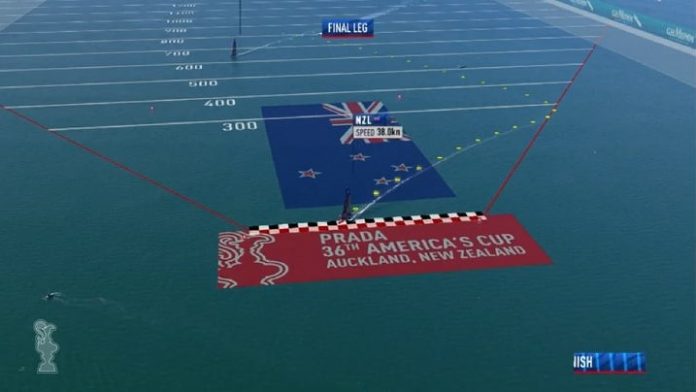 On day 7 of the 36th America’s Cup presented by PRADA, the Kiwis scored the 7th point they needed to raise the Auld Mug in front of thousands of spectators .

A spectacular achievement for Emirates Team New Zealand and the yacht club they represent, the Royal New Zealand Yacht Squadron. Another confirmation that – in sailing – the Southern hemisphere country of 5 million people can punch way above its weight.

Luna Rossa Prada Pirelli, fought until the last race and the team showed talent and experience throughout the whole event and their story is far from over.

As start time drew closer there was little sign of the breeze, forcing a postponement.

But then, as the clock counted down the breeze started to build and after a 30min delay race 10 was underway.

Just as Luna Rossa Prada Pirelli entered the pre-start area helmsman Jimmy Spithill talked about wanting the right-hand side of the course, a quick clip from the onboard comms that gave us a clue to the strategy and play that was about to unfold.

As both came back towards the line Team New Zealand had started to windward of Luna Rossa Prada Pirelli, coming in slightly late to the line and tacking off onto port straight away to take the right-hand side of the course.

Luna Rossa Prada Pirelli found themselves in a right-hand shift and were unable to tack across. The Kiwis were able to lock into the right-handed breeze and gained the early advantage.

As the pair came together the Kiwis tacked in front of Luna Rossa forcing the Italians to tack back onto starboard and allowing themselves to go back to the right-hand side of the course. A strong tactic following a solid and confident start.

As the pair came back together for the second time the Italians had made distance and ducked the Kiwis as they crossed. Luna Rossa were now able to get to the right-hand side of the course.

As the breeze fluctuated the key was to get into phase with the breeze.

Around gate 1 it was Emirates Team New Zealand that led by 7 seconds taking the right-hand mark while Luna Rossa Prada Pirelli took the left-hand mark. A split was what the Italians wanted if they were to find a passing lane on the downwind leg. The Kiwi task was to close down the opportunities.

Downwind, having swapped sides the Kiwis were sailing at 41 knots to the Italians’ 39 knots but as the pair came into gate 2 the game was still close as Luna Rossa trailed by just 9 seconds.

Meanwhile, Emirates Team New Zealand headed out to the right-hand side of the course, protecting their position whenever required.

But as the second beat unfolded the Kiwis started to stretch out their lead, increasing the distance to around 300m on the water.

By now they were free to choose the mark that they wanted at gate 3 taking the left-hand side and leading by 27seconds. Luna Rossa split once again taking the right-hand mark in an effort to find a different and quicker route down leg 4.

But even if they were to find more breeze, the Kiwis were sailing consistently quicker and had pulled the distance out to over 500m. By gate 4 that had translated into a lead of 37 seconds as they rounded the left-hand mark to head out to the left-hand side of the course.

Behind them Luna Rossa took the right-hand mark and did the more difficult move to get out to the right-hand side of the course and continue to keep out of phase with their opponents.

The third upwind leg offered little in the way of a comeback for the Italians. All they could hope for now was for their opponents to make a mistake.

Through the last gate, Emirates Team New Zealand took the right-hand mark rounding 49 seconds ahead as they headed off on the last leg of what would surely be the last race in the 36th America’s Cup.