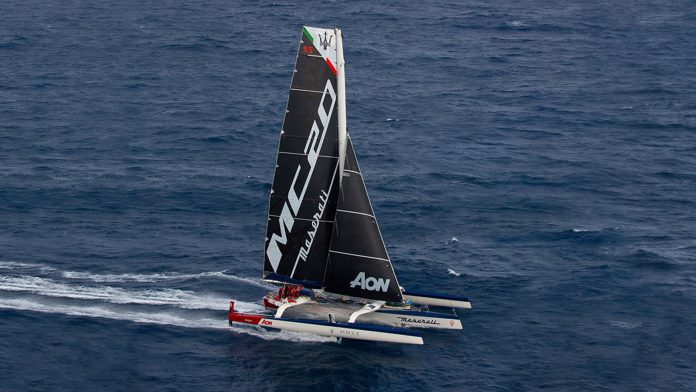 The Italian trimaran crossed the starting line off Monaco at 1:18 54” on Sunday March 21st and picked up speed towards Corsica. «At first we were sailing really fast with 25/30 knots of north-easterly wind, reaching up to 38 knots of speed, then the wind dropped before the Strait of Bonifacio for a couple of hours. Luckily, the wind got stronger again and we started speeding up in the strait. It’s been really incredible, we crossed the finish line sailing at 35 knots! We knew this would be a risky window because of the light wind near Corsica, but we wanted to try anyway and we did our best, pushing Maserati Multi 70 to the maximum, and we did it: we’re all very happy, and exhausted!»

Aboard Maserati Multi 70, with Giovanni Soldini, there was also Vittorio, an Italian Olympic sailor and Nacra17 World Champion, who already raced with the trimaran’s crew in many occasions. With them, Guido Broggi, Carlos Hernandez Robayna, Oliver Herrera Perez and Matteo Soldini.

Soldini and his Team already attempted to beat the record last weekend, during the night between March 13th and 14th, with tough weather conditions. A few miles after the starting line, the rudder’s fuse system engaged; with violent wind and waves, putting the rudder back into operation would have been too dangerous and the Team was forced to give up.

Maserati Multi 70 was back into the water at the end of February, after almost four months in the shipyard. In the next days, the Italian Team will set sail towards England, looking for new records.