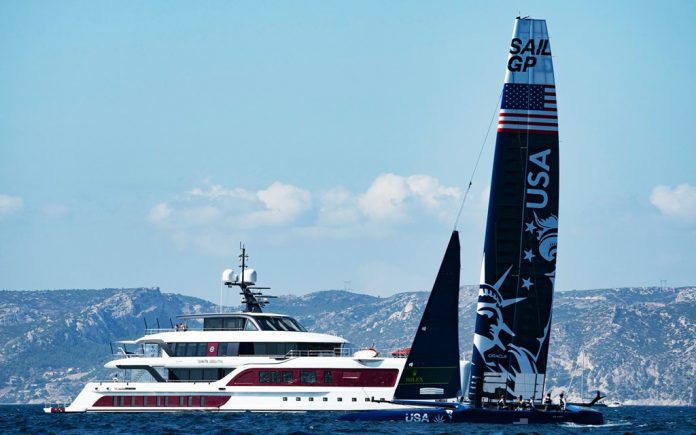 Following a successful superyacht program in New York and Marseille during the league’s inaugural season in 2019, SailGP Adrenaline Yachts returns for Season 2 with an extended program beginning with the season opener set for the beautiful island of Bermuda.

On April 24-25, the Bermuda Sail Grand Prix presented by Hamilton Princess will set the stage for an expanded season that will feature an expanded eight-event calendar. Following the opening event, the first-ever Italy Sail Grand Prix will be held June 5-6 in Taranto. The championship will then continue in Europe with the Great Britain Sail Grand Prix | Plymouth on July 17-18, followed by the ROCKWOOL Denmark Sail Grand Prix | Aarhus on August 20-21.

The closing events in Europe will be held in Saint-Tropez (France) on September 11-12, and Cádiz (Spain) on October 9-10, before the league heads to the southern hemisphere for the first ever New Zealand event in Christchurch (January 29-30, 2022). The season culminates with the Grand Final in San Francisco on March 26-27, 2022.

With new teams, new cities, new technology and the sport’s largest monetary prize at stake, Season 2 promises to be intense. The New Zealand SailGP Team under the leadership of Olympic gold medalists Peter Burling and Blair Tuke will make its debut, alongside a new-look United States team with Jimmy Spithill at the wheel. Season 2 will also welcome the sport’s most successful Olympic sailor of all-time Sir Ben Ainslie (GBR) who will line up against the remaining teams – reigning champions Australia, Denmark, France, Japan and Spain. With four Olympic champions among the league’s eight helms, who have combined for 10 medals in 14 Olympic appearances, fierce rivalries will be formed.

BWA Yachting will partner with SailGP to manage and deliver the SailGP Adrenaline Yachts. The program offers an unprecedented experience and is designed for owners who want to witness the most competitive racing on water from the comfort of their own yacht.

The limited availability membership guarantees a premium position in a designated area on the racecourse perimeter – for an unrivaled view of the heart-pumping racing. For the ultimate experience, membership also grants complimentary merchandise and access to additional event activities, always in compliance with safety and health standards and regulations.

BWA Yachting VP Americas Laura Esteve said: “Watching the eight national teams fly in front of your deck at speeds exceeding 50 knots while they fight for the $1 million is going to be incredibly exciting! We are delighted to welcome back the super yachts that joined us in 2019 and look forward to growing our SailGP superyacht family for SailGP Season 2.”