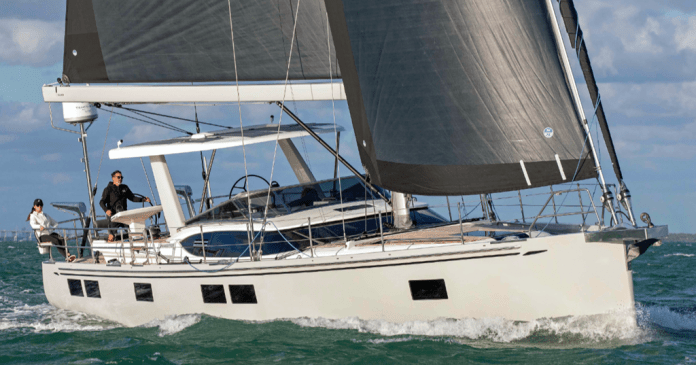 The first unit of the award winning Hylas H57 has arrived on the East coast of the US. The sailboat will be based in Fort Lauderdale for the near future where in person visits and sea trials, as well as virtual guided tours, are now available.

There are a number of design enhancements that Bill Dixon has brought to the Hylas range with this model.
“The twin rudders and the solent rig with a self-tacking jib make the Hylas H57 easy to sail in all conditions,” said Hylas Yachts Director Peggy Huang. “Comfort underway has been improved with a designer hardtop and integrated windshield.

The optional extending awning over the aft deck also brings a whole new level of relaxation when it comes to dockside “apres sail” comfort. To extend seasons and during extended passages an optional helm enclosure extends from the hard top. Supported by a carbon frame this all weather protection brings year round enjoyment. Other characteristics that we have come to expect from Hylas such as build quality, ocean crossing capability and the benefits that the center cockpit brings to living space below remain intact.”

In recognition of this innovative design and quality build she has been awarded the Best New Yacht Development award by the Yacht Building Association of Taiwan.

The owners have taken full advantage of the Hylas yard’s willingness to customize by introducing some interesting enhancements.
“There is so much innovation with this yacht I just couldn’t resist making some personal choices that would reflect our vision for such a forward thinking design,” said co-owner David Crafa. “The new Hylas H57 SV Vanishing Point is designed to be extremely self-sufficient while never sacrificing the comforts of home thus keeping with the tradition of building a smart, safe, fast and luxurious yacht just like the legendary models that came before her.”

UPGRADES
This first Hylas H57 has a number of options and enhancements.

To keep the sailboat safe and self-sufficient while offering maximum comfort, hull#1 has been fitted with next generation technology such as Raymarine‘s Augmented Reality System as well as cutting edge FLIR thermal imaging cameras mounted in critical areas such as the spreaders and in the engine room. The camera feeds flow through raynet and can be overlaid on electronic charts or the HD digital radar.

The network also displays NMEA data from the Volvo D150 power plant as well as the Northern Lights 9kw Generator. As always, Auto pilot, weather, instruments and the new fusion RS 770 Apollo series entertainment system are networked. All systems on the network can be displayed and/or controlled from any of the 3 Axiom 16XL multi displays at the helm or down below at the nav station or by remote via the ray control app on iPhone or iPad.

At the heart of the first Hylas H57, Xantrex has designed a high capacity Lithium Iron phosphate battery bank and charging system complete with 1200W of their new low-profile solar panels which are easily mounted on the hard top.

The Xantrex lithium batteries and charging system w solar has been designed by the engineers at Xantrex to accommodate the hyper efficient TMD Thermodynamica Inverter HVAC system which allows for aircon and heating run times of over 12 hours running directly from the house 24v battery banks without having to charge from the Genset.

There is also a complete custom design plumbing system from Raritan. It utilizes their marine elegance heads and two separate electro scan units, which sanitize black water and eliminate having to call and wait for the pump out boat all day. A high efficiency dual element 18-gallon Torrid Marine Explorer series water heater makes hot water for days and can even be run from the DC Lithium batteries or directly from solar. Our Seagull IV X-1F freshwater filter helps keep drinking water tasting great.

“More featured equipment that keeps us comfortably while away from the dock is our Parker 500 gallon per day water maker. It’s high output, simple to operate, very robust and easy to maintain,” commented David Crafa. “An Ultra anchor keeps us exactly where we expect to be when we wake up in the morning. And when we need to get into shore our new center console Highfield CL380 outfitted with an E-propulsion Navy 6.0 will get us there without burning a lick of fuel. It’s our Aqua Tesla! When the weather’s up and the current is strong, Sidepower Bow and Stern Thrusters make easy work of shorthanded docking.”