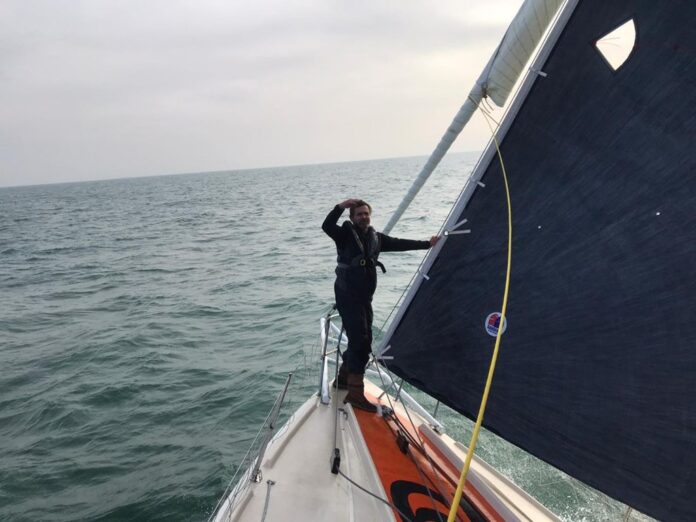 Neil Payter has been professional sailor and commercial fisherman since 1985 then moved onto becoming a professional skipper and feels now ready for the Global Solo Challenge.
He holds a Yachtmaster Ocean certificate and has been an RYA Yachtmaster Offshore instructor for over 20 years. He has crossed the Atlantic 14 times, sailed from South of France to Namibia and back, and clocked over 160.000 miles at sea making him a very experienced sailor and seaman. He has also raced in the OSTAR and the Azores and Back Race single-handed and in the Round Britain and Ireland.

We have interviewed him in Lanzarote where he was enjoying beautiful weather and a view of the Atlantic Ocean.

Where does your passion for sailing come from?
I went sailing with my grandfather since I was a child. He had a small sailing boat and I liked fishing and it was a means to an end. I wanted to go fishing which meant I had to go sailing and I learnt that way.

What lessons have you learnt from sailing?
You don’t fight the sea, because you will lose!

What brought you to like single-handed sailing?
This is a good one. In 2015 my wife said to me if I thought I’d sit in her restaurant drinking her profits all summer I was wrong, and she entered me for the Azores and Back race 2015 to get rid of me.

What prompted you to sign up for this event?
I had benn talking to Alex Alley before who sailed on Pixel Flyer and I sailed with him. He had attempted the round the world record which inspired me. When I saw the Global Solo Challenge I was already planning to do the OSTAR and the GSC seemed like a natural next step, the next Everest if you like.

How do you plan to prepare for this event?
I’m going to bring my boat down to Lanzarote, so I can have 12 months a year of training and experience here. Then of course I have a long passage qualifying route to plan. I have a good team down here already, good boatyards, marina facilities and, 12 months a year sailing in the Atlantic. I can see the Atlantic from where I am sat.

Tell us about your boat or the boat you would like to have.
She’s a french built one-off Class40, original owner was Stephen Card, she’s done a few of the Class40 races. The previous owner holds the record for the 40ft Azores and Back race. She took line honours in one of the Royal Western Yacht Club’s Round Britain and Ireland Races. All in all she has been quite lightly sailed in my opinion and she’s in good conditions. I’ve owned her for two and a half years now. She has all new standing rigging, sails are in good condition. I want to convert from hank-on headsail to furled just to make it more manageable, other than that a few bits and bobs on the electronics and she’d be good to go, she was ready for the OSTAR. Just need to do the necessary modifications to comply to Cat 0 rather than Cat 1.

Do you intend to link this personal challenge with a social message?
Yes I will be supporting two charities: Sullivan Heroes and the Oakley Waterman Foundation. Both charities work with children affected by cancer.

Is there anything you’d like to add
If any of the other guys who are entering are looking for somewhere with 12 months a year sailing, I suggest they get themselves down here, we could all help each other out.

ABOUT THE BOAT
Boat  name: Caribeira 19