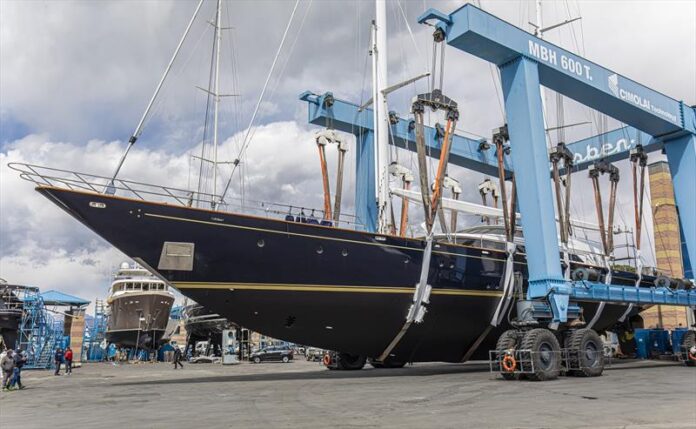 The historic ketch, built in 1993 at the iconic Perini Navi shipyard in Viareggio, has been restored to her original splendor according to the wishes of her Italian owner. Through the Forza 5 company in Milan, Lusben was chosen to carry out the ten-year refit of the yacht.

The Lusben team was responsible for painting the hull, living areas and part of the aft cockpit, as well as replacing the generators and refurbishing almost half of the teak deck. The deck work in particular has allowed the shipyard’s specialized workers to highlight their experience and know-how; more than 40% of the teak was replaced with slats of variable length from 4.5 to 6 meters, a notoriously complex operation. The standard slats are typically much shorter at just 3 meters, and work of this type requires greater care and precision on sailing boats than on motor boats.

The refit went on for a total of 5 months and involved almost 50 workers in total, including direct employees and external suppliers who worked in cooperation with the crew. The incredible team effort earned the expressed interest and satisfaction of the owner, who is now ready cruise the Mediterranean.

“Morning Glory” is the first of 6 Perini Navi boats to be launched this season. The remaining 5 are currently undergoing refits at the Lusben facilities in Livorno and Viareggio, planned for delivery to their owners in the coming weeks.

Despite the severe limitations imposed by the global pandemic, careful planning of activities has allowed Lusben to stay on shedule. Operations within the site’s premises have progressed without delay; in fact, this year the turnaround has been faster than usual. At the Viareggio site alone, the number of boats peaked at 23, from 28 to 50 meters, occupying the work stations at sea and on land.

When the Palma International Boat Show takes place from 3 to 6 June YYachts will also be part of one of the...
Read more
Sailing Yachts

With a mast taller than the Statue of Liberty, the latest ship from Royal Huisman is destined to go down in the...
Read more
Sailing Yachts

On the wake of the recent unveiling, it is now time to reveal more about the SW108 Hybrid: a new project featuring...
Read more
Sailing Yachts

This new version of the Swan 55 model Line represents a new generation of hull design developed over the past couple of...
Read more
Sailing Yachts

YYachts in Greifswald will hand over four yachts to their owners this spring. The start was recently made with "Vegas Baby". This...
Read more
- Advertisment -